And the former president, appearing at a tele-town hall sponsored by the anti-tax group called Club for Growth, continued to make unfounded allegations that the presidential election was rigged, this time suggesting that his Texas victory over Biden was larger than the official count by the Texas Secretary of State.

“I appreciate the big win we had in Texas, and it was probably even bigger than they had down, you know what I mean by that,” Trump said. “But we won by a lot, and (it) wasn’t close. And I love Texas.” 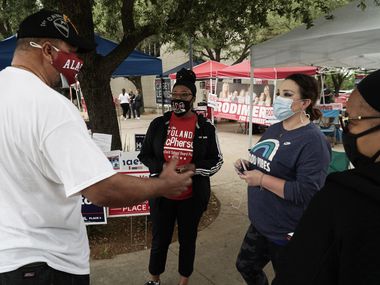 According to the Secretary of State, Trump beat Biden by about 6 percentage points, winning the state’s 38 electoral votes.

“It just shows how sinister this guy is,” said Texas Democratic Party Chairman Gilberto Hinojosa. “He never stops. It’s a fundamental flaw he has in his character. He lost the presidential election and he really believed he was going to win.

“If she’s reaching out to get the endorsement of this pathetic liar, I question whether she can be a good representative in Congress,” he said.

The tele-town hall meeting was designed to showcase Trump’s endorsement of Wright, who is running in the District 6 race to replace her late husband, former Rep. Ron Wright, in Congress.

Wright died in February after contracting COVID-19, and Trump said Susan Wright was the ideal replacement for Ron Wright from the large field of 23 candidates.

Trump blasted Biden for his $1.8 trillion American Families Plan proposal. Under the plan, billions of dollars would be invested in programs like child care, paid family leave and education. It would be paid for by nearly doubling the capital gains tax to 39.6% for people earning more than $1 million a year. The current rate is 20%.

The package also calls for raising the top marginal tax income rate to 39.5%, up from the current 37%.

“Susan will stand strong against Biden’s plan to impose the largest tax increase in the history of our country,” Trump said, adding the Democratic Party proposals were “beyond socialism.”

Trump also criticized the Biden administration’s handling of the migrant crisis at the southern border with Mexico.

“We had it done. We had it closed up,” Trump said, adding “Now they don’t know. They have no idea what they’re doing…They’re not even pretending to have an idea.”

The former president’s criticism also included his belief that Biden wants to abolish oil and natural gas and destroy the Second Amendment.

Biden does want to wean the country off its reliance on fossil fuels and supports reforms to curb gun violence.

In a familiar refrain, Trump also blasted the media. He also criticized Biden’s address Wednesday to a joint session of Congress.

“There are no greater fakes than the people in the media. They are horrible,” Trump said. “They even actually said they were very happy with the performance last night of Joe Biden. Anybody watching that will tell you that was not a good performance.”

Wright told Trump she was grateful for his backing, which is expected to help her attract voters in the small town and rural areas in Ellis and Navarro counties in the 6th Congressional District.

“I’m ready to work for you on day one for the America First agenda,” she said.

The special election to fill Ron Wright’s unexpired term is Saturday, May 1.