The Dow is sporting triple-digit gains this afternoon

The Dow Jones Industrial Average (DJI) is building off this morning’s gains at midday, last seen up 506 points as it stages an impressive comeback from its worst week since October 2020. Meanwhile, the S&P 500 Index (SPX) is firmly higher, thanks to strength in the energy sector and reopening plays. The Nasdaq Composite (IXIC) is sporting more modest gains, as it attempts to brush off losses from Big Tech bigwigs Amazon.com (AMZN), Tesla ((TSLA)), and Netflix (NFLX). Elsewhere, Bitcoin (BTC) is slipping, falling below the $33,000 mark as China continues to tighten restrictions around cryptocurrency mining throughout the country. 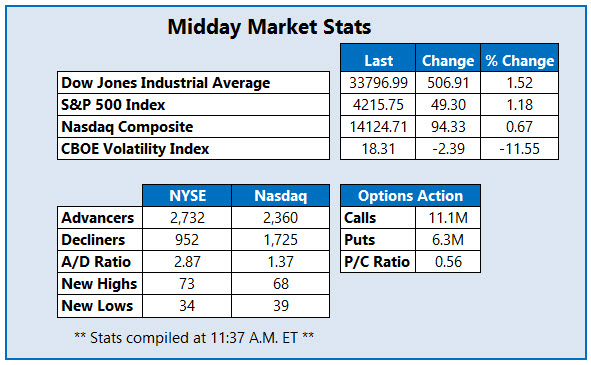 One stock getting blasted in the options pits today is Globalstar, Inc. (NYSE:GSAT), up 14.7% at $1.48 at last check, after B. Riley initiated coverage of the security with a “buy” rating and a Street-high price target of $3.25, implying 152% upside. The firm noted the company is prioritizing monetizing its spectrum assets, and called the company’s Mobile Satellite Service business is “perfectly positioned.” So far, 101,000 calls and 2,474 puts have crossed the tape — 16 times the intraday average. Most popular is the July 2.50 call, followed by the 1.50 call in the same series. The equity has had a volatile run on the charts over the past year, surging to a Feb.10, all-time high of $2.98, before pulling back to the 89 cent level. Shares are currently facing overhead pressure at the $1.60 mark, while the 130-day moving average remains as a solid source of support. Year-over-year, GSAT has added 367.6%.

At the top of the New York Stock Exchange (NYSE) today is Lydall, Inc. (NYSE:LDL), last seen up 82.3% to trade at a four-year high of $60.67, after Clearlake Capital Group-backed Unifrax announced it will acquire the industrial machinery concern for $62.10 per share — or an 87% premium to LDL’s last close — in a deal totaling $1.3 billion. The deal is expected to close in the second half of 2021, and will create a a global specialty materials platform with new cutting edge technologies. Prior to today’s massive bull gap, which also represents the equity’s biggest single-day percentage jump on record, shares had been climbing up the charts with support from the 150-day moving average, which contained its latest pullback. Longer term, LDL sports an impressive 354.8% year-over-year lead. 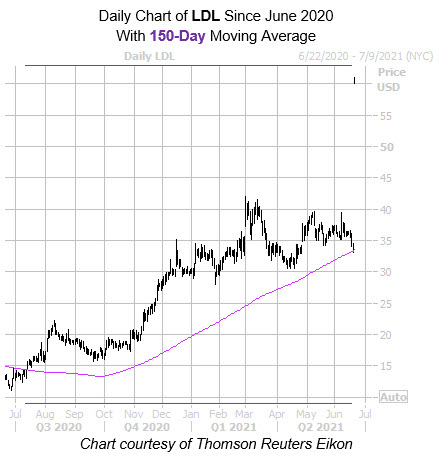 Meanwhile, AiHuiShou International Co Ltd (NYSE:RERE) is at the bottom of the NYSE today. Shares are down 16.8% to trade at $13.99 this afternoon, though a reason for today’s negative price action remains unclear. The consumer electronics goods name made its market debut on Friday, June 18, opening 30.6% above its initial public offering (IPO) price of $14, and notching a spot among the benchmark’s top percentage gainers.

NYSE:DOW – S&P/ASX ALL AUSTRALIAN 200 Bearish Momentum With A 1% Drop In The Last 24 Hours