The Dow is down nearly 300 points midday

The Dow Jones Industrial Average (DJI) is headed toward a triple-digit nosedive, last seen down 297 points. The S&P 500 Index (SPX) and Nasdaq Composite (IXIC), are also continuing to drag midday, and the latter is off over 2% as FAANG stocks weaken further. Tech is continuing to weigh on markets this afternoon, while comments from Treasury Secretary Janet Yellen over a potential rise in interest rates has also left traders spooked. Yellen suggested a hike in rates could be necessary to keep the economy from overheating, calling any potential increase “very modest.” 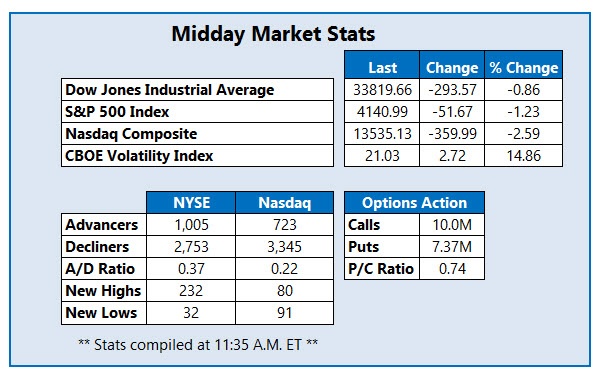 Party City Holdco Inc (NYSE:PRTY) is seeing a massive surge in bullish options activity today, with 13,000 calls across the tape so far — 24 times the intraday average — compared to just 83 puts. The monthly July contract is getting the most attention by far, with the 15, 8, and 7 calls popular. PRTY is down 6.9% at $6.84 today, coming off a two-month high touched during yesterday’s trading. It should also be noted, the company is expected to report earnings before the open next week on Monday, May 10.

Cocrystal Pharma Inc (NASDAQ:COCP) is the best performer on the Nasdaq today after the company released an update on its broad-spectrum antiviral Covid-19 drug candidates. It’s lead development candidate, CDI-45205, has shown positive results in animal tests, sending COCP up 100.8% to trade at $2.49 at last check. The security is pacing for its highest close since last August and has toppled its 180-day moving average, which kept a lid on shares during yesterday’s trading. 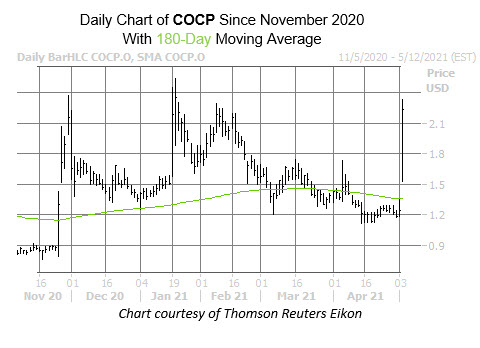 ChemoCentryx Inc (NASDAQ:CCXI), meanwhile, is one of the worst performers on the Nasdaq today, off 40.6% to trade at $28.75, earlier hitting a more than one-year bottom of $24.60. While a direct driver for the negative price action is not quite clear, the company late last week posted losses for its first quarter that were wider than analysts’ estimates. The equity hit its lowest level since 2019 earlier today, and is now down 52% year-over-year.

NYSE:DOW – S&P/ASX ALL AUSTRALIAN 200 Bearish Momentum With A 1% Drop In The Last 24 Hours

Tetris - New kid on the block