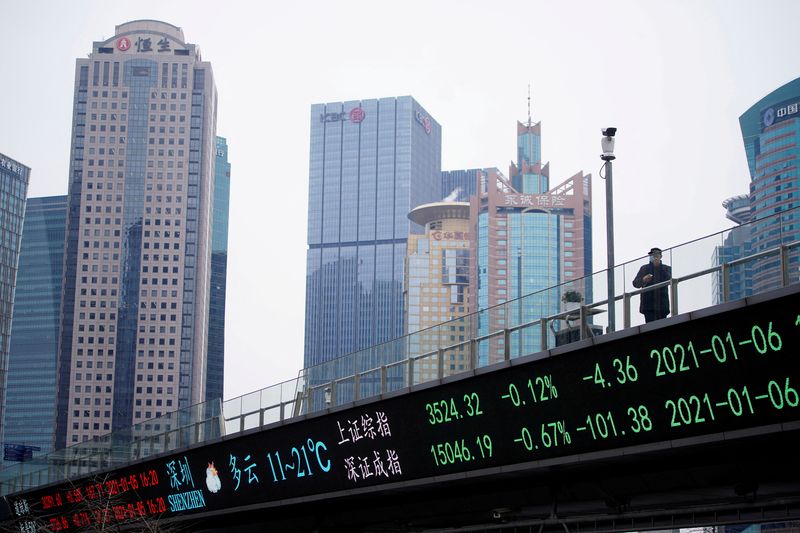 © Reuters. FILE PHOTO: A man stands on an overpass with an electronic board showing Shanghai and Shenzhen stock indexes, at the Lujiazui financial district in Shanghai, China January 6, 2021. REUTERS/Aly Song//

MSCI’s broadest index of Asia-Pacific shares outside Japan rose 1.28% to its highest level in nearly a month, with most Asian stock markets in positive territory, and Chinese blue chips, up 2.5%, leading the charge.

bucked the trend however, falling 1%, as observers pointed to profit taking heading into the end of the fiscal year. The benchmark hit a two-month closing high on Tuesday. ()

Ukraine, on Tuesday, proposed adopting a neutral status in a sign of progress at face-to-face negotiations, though on the ground, reports of attacks continued, and Ukraine reacted with skepticism to Russia’s promise in negotiations to scale down military operations around Kyiv.

The rally looked set to peter out later in the day however, as while U.S. and European shares had risen sharply overnight, futures pointed to a lower open on Wednesday.

“On the one hand there has been more positive news regarding Ukraine, and the market is hopeful of a peace deal at some point, which is resulting in a bit of a ‘risk-on’ event, with shares up,” said Shane Oliver chief economist and head of investment strategy at AMP (OTC:) Capital.

“But then it’s back to worrying about inflation and bond yields, and there’s this debate about whether we’re going to see a recession in the U.S. because of the inversion of part of the U.S. yield curve.”

The widely tracked U.S. 2-year/10-year Treasury yield curve briefly inverted on Tuesday for the first time since September 2019, as bond investors bet that aggressive tightening by the Federal Reserve could hurt the U.S. economy over the longer term. [US/]

On the other hand, the spread between the yield on 3-month Treasury bills and 10-year notes this month remained steeper.

“The messages from the yield curve are very confusing,” said Oliver.

The benchmark U.S. 10-year yield was last softer at 2.3615% having risen as high as 2.557% on Monday, its highest since April 2019, as traders position themselves for quickfire rate hikes by the U.S. Federal Reserve.

The spread between the U.S. 10-year and 2-year yields was last 3.4 basis points.

The Bank of Japan increased its efforts to defend its key yield cap on Wednesday offering to ramp up buying of government bonds across the curve including through unscheduled emergency market operations.

While this apparently underscored its resolve to hold to the policy, some analysts questioned whether the strategy was sustainable.

“I wouldn’t be surprised if the Bank of Japan sets a higher limit for 10 year JBG yields – currently at 0.25%. They can’t afford to be too far behind the curve, because if the yen were to weaken further beyond certain levels it could raise market fears,” said Joël Le Saux fund manager of Eurizon Fund’s Sustainable Japan Equity sub fund.

The widening differential between U.S. and Japanese yields have caused the yen to weaken sharply, but it managed to regain some lost ground on Wednesday.

The Japanese currency was was at 121.95 per dollar, compared to from Monday’s low of 124.3. Traders pointed to rising fears that Japanese authorities might step in to try and halt the slide as being behind the recovery. [FRX/]

Elsewhere in currency markets, the euro was up 0.2% at $1.1107 supported by hopes that talks between Russia and Ukraine lead to peace.

Supply tightness kept crude prices firm, according to analysts, as the oil market was not ready to speculate that the talks would end the conflict and pave the way for Western allies to remove sanctions against Russian oil exports.