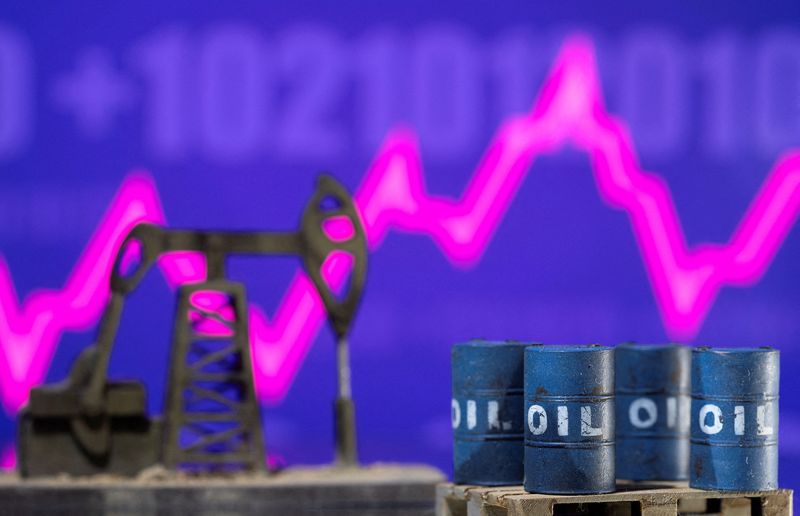 © Reuters. FILE PHOTO: Models of oil barrels and a pump jack are displayed in front of a rising stock graph and “$100” in this illustration taken February 24, 2022. REUTERS/Dado Ruvic/Illustration

(Reuters) – Oil prices dove on Thursday as the United States weighed its largest-ever drawdown from its oil reserves, while Asian stocks fell as China reported weak manufacturing data and uncertainty over the war in Ukraine dragged on.

The United States is considering releasing up to 180 million barrels of oil over several months from strategic reserves, four U.S. sources said, as the White House tries to lower fuel prices that have surged since Russia invaded Ukraine late last month.

But shares in Asia were hurt by data showing that activity in China’s the factory and services sectors swung into negative territory in March, contracting simultaneously for the first time since the peak of the country’s COVID-19 outbreak in 2020.

MSCI’s broadest index of Asia-Pacific shares outside Japan fell 0.56%, led by a 1% drop for Hong Kong’s , and a 0.77% decline for Chinese blue chips.

“The sharp declines (in activity) were largely due to the surging Omicron transmission and corresponding stringent measures in major cities,” Chaoping Zhu, a global market strategist for J.P. Morgan Asset Management in Shanghai said in a note, adding that the financial pressures this puts on businesses and households means investors can expect “further monetary supportive measures”.

The euro held at a one-month high against the dollar on Thursday, having rallied on hopes the war in Ukraine might be entering a new de-escalating phase, while the yen was set for its worst month since November 2016.

The European single currency rose as high as $1.1175 in early trade its highest in a month, having gained 1.7% so far this week.

Overnight, the Dow Industrial Average, the and the were down, following similar downward movements in European stocks.

“In U.S. markets, which we take our cue from, the sell-offs are reflecting an ongoing assessment of inflation threats and what the Fed is going to do about it,” said Rob Carnell, chief economist at ING in Singapore.

“At the same time, in the last 24 hours, markets have responded cautiously positively to events in Ukraine, with Russia refocusing away from Kyiv, but things are still looking quite uncertain.”

Bond markets were smouldering after a stinging sell off.

Two-year Treasury yields, which track policy expectations, were last at 2.23164% and have climbed more than 150 basis points for the quarter – the steepest such rise since 1984 on expectations of quick-fire interest rate hikes.

Inflation continues to squeeze governments and central banks around the world. Germany registered a whopping 7.6% inflation rate on Wednesday, sending its 2-year bond yield into positive territory for the first time since 2014.