While the Delta variant of the coronavirus has led to rising infections and curbs on movement, global consumption is expected to hold up and tighten the market through the end of the year.

Oil rose alongside broader equity gains with investors optimistic global economic growth will continue even in the wake of Covid-19’s resurgence.

Futures advanced 2.7% in New York on Tuesday, the biggest gain in more than two weeks. U.S. and European stocks touched record highs amid expectations that economic growth will remain strong. While the delta variant has led to rising infections and curbs on movement, global consumption is expected to hold up and tighten the market through the end of the year.

“Crude oil is riding the coattails of a strong showing in the U.S. equity markets,” said Phil Streible, chief market strategist at Blue Line Futures LLC in Chicago. “Some investors are also getting optimistic that the blow to demand from the delta variant spread is tampering off, if even just slightly.” 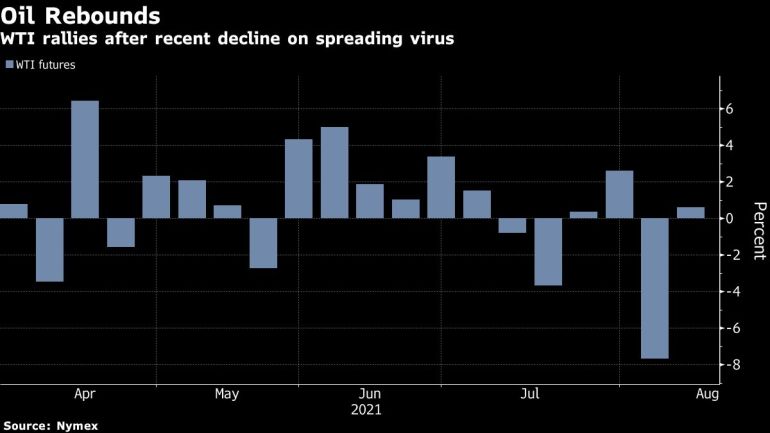 In the short-term though, the spread of the virus in Asia, where many countries are lagging behind with vaccination rates, is inflicting a blow on fuel consumption. The pandemic’s resurgence in the U.S., particularly in states where up-take of the vaccine is low, is also sowing concern.

China Petroleum & Chemical Corp., the nation’s biggest refiner commonly known as Sinopec, is cutting run rates at some plants by 5% to 10% compared with previously planned levels this month, according to Jean Zou, an analyst at commodities researcher ICIS-China.

The number of seats being offered by China’s airlines dropped the most since early in the pandemic as the nation implemented fresh restrictions to contain the latest wave, based on data from aviation specialist OAG.

“China’s Covid-Zero strategy means restrictions could continue to widen and tighten, denting oil consumption,” said Vandana Hari, the founder of consultant Vanda Insights. “Delta outbreaks are certainly cause for a revaluation of the earlier anticipated trajectory of the global demand recovery.”

Meanwhile in the U.S., virus cases surged to the highest weekly level since early February. Gasoline demand fell for a second straight week, dropping less than 1% to 9.486 million barrels a day in the week ending Aug. 6, Descartes Lab said in a survey based on movements in cellular devices.