SA cricketer Solo Nqweni has come a long way since first being diagnosed with Guillain-Barre Syndrome, an autoimmune disorder, sharing an inspirational clip of his journey to recovery on social media.

Taking to his social media account, the athlete shared the highs and lows of learning to live with his diagnosis. From day 1 in hospital through months and months of physiotherapy. 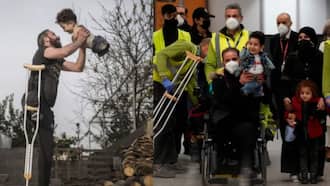 By some miracle, Nqweni was able to regain his strength and ends the clip by showing himself working out in the gym.

Check out some of the supportive comments from social media users:

“Praise the Lord you are lucky you got the best medical treatment in the best hospitals. The majority of black people are not this lucky.”

“I think I shed a tear… Yho. Ah ah. I don’t know you, or your story, but what I do know is that you’re a phenomenon! Through God’s grace and mercy!”

In more wholesome feel-good news, Briefly News previously reported that a father and son duo are finally going to be able to use artificial limbs after great intervention saw them get the help they needed.

Munzir El Nezzel and his son Mustafa touched many hearts after their award-winning picture went viral and symbolised the plight of the people in war-torn Syria.

The snap, taken by Turkish photographer Mehmet Aslan – titled Hardship or Life, captured a beautiful moment between Munzir, who lost one leg, and his son who was no limbs.

According to Aljazeera, the duo were both affected by the brutal conflict in their country, as the 35-year-old dad had his leg amputated after a bomb attack.

His six-year-old son was born with a congenital disorder which was caused by the medication taken by his mum while pregnant after she fell ill due to nerve gas.

The aforementioned photo was declared ‘Photo of The Year’ at Siena International Photo Awards (SIPA) in 2021 and also made headlines in Italy.

This saw people raise about R1.7 million to assist in providing Mustafa and Munzir with prosthetic limbs.