Purchases of new single-family homes increased 14 percent in September to an 800,000 annualised pace, according to government data.

Purchases of new single-family homes increased 14% to an 800,000 annualized pace after a downwardly revised 702,000 rate in August, government data showed Tuesday. The median estimate in a Bloomberg survey of economists called for a 756,000 rate. 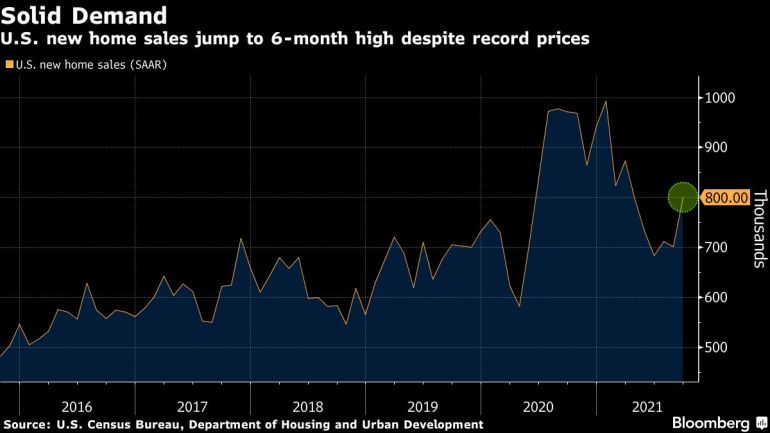 The figures suggest demand is stabilizing after high prices and a lack of inventory pushed the pace of contract signings below pre-pandemic levels in recent months. However, headwinds remain as ongoing supply chain and labor challenges slow construction and rising mortgage rates weigh on homebuyer affordability.

Quarterly home orders at PulteGroup Inc. missed estimates, the Atlanta-based builder said earlier on Tuesday. Pulte, faced with a backlog of contracts, have slowed sales while it catches up on production.

“The housing industry continues to experience robust demand, but significant disruptions in the manufacture and supply of many building products are extending overall build cycles,” Ryan Marshall, Pulte’s chief executive officer, said in a statement.

The report, produced by the U.S. Census Bureau and the Department of Housing and Urban Development, showed the median sales price of a new home jumped 18.7% from a year ago to a record $408,800. The increase reflected a pickup in sales of homes priced at least $300,000.

There were 379,000 new homes for sale as of the end of September, unchanged from a month earlier. At the current sales pace, it would take 5.7 months to exhaust the supply of new homes, compared with 3.5 months a year ago.

Of the homes sold in September, almost one third had yet to be started, though the report showed an increase in purchases of already completed dwellings.

Sales rose in three of four regions, led by sharp gains in the Northeast and South.

Separate data out last week showed purchases of previously owned homes, which account for the majority of the market, jumped last month by the most in a year, underscoring the strength of underlying demand.

However, the monthly data are quite volatile. The report showed 90% confidence the change in sales ranged from a 3.9% decline to a 31.9% increase.

Dow Today – Analysis | Cathay Pacific Is On Life Support, and Hope Is Running Out – The Washington Post

Dow Today – What happens to the stock market when interest rates rise?

Dow Today – Cathay Pacific Is On Life Support, and Hope Is Running Out – BloombergQuint