Mark Shininger is a like a lot of millennials who played with Pokemon cards during grade school. He traded the collectibles with his friends and competed with his brothers for the shiniest, most powerful characters — until eventually he tired of the hobby, stowed the cards neatly in boxes and grew up.

Then last year as the COVID-19 pandemic wore on, Shininger began hearing about vintage Pokemon card sales, sometimes reaching into the hundreds of thousands of dollars. So the 24-year-old mechanical engineer from Random Lake, Wisconsin, dug up his old collection of Pikachus and Charmanders. He logged the creatures into a spreadsheet and turned his childhood passion into a US$4,500 side hustle.

“I kept them because I thought one day these might be worth something,” he said. “I was right.” 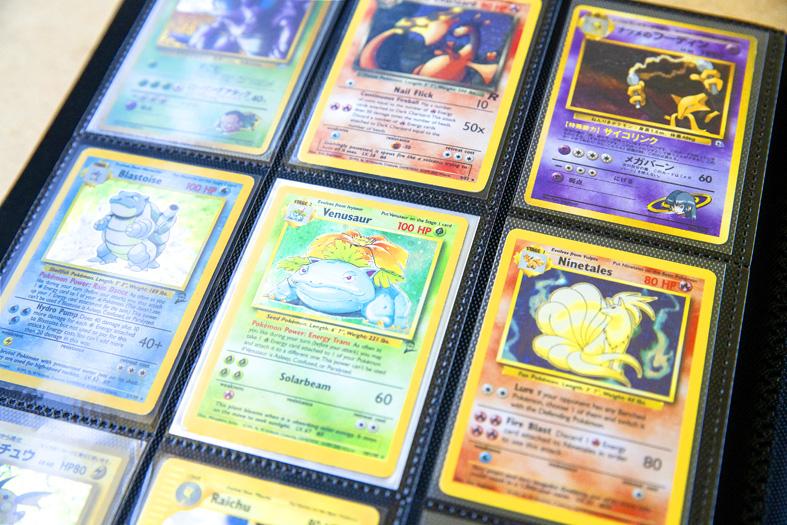 A lot of 20 and 30-somethings are coming to a similar realization. Fueled by nostalgia, new ways to sell online and a surplus of free time during the pandemic, the value of certain Pokemon cards has skyrocketed in the past few months. Last year, overall trading card sales climbed a record 142 percent on eBay.com, and Pokemon led the pack, averaging five card sales a minute — more than even baseball cards. That momentum has continued into this year. EBay listings of Pokemon cards were up 1,046 percent in the first quarter.

The new Pokemon gold rush has fueled a mini-explosion of entrepreneurial activity. Individual collectors like Shininger have been able to make a small killing selling cards online — even as Target Corp suspended sales of packs after a rash of parking lot thefts.

There has been an influx of business to new platforms that help collectors unload their wares. Authentication services have received too many requests to keep up. One of them, the Certified Collectibles Group, last week sold a majority stake to Blackstone Group Inc at a US$500 million valuation.

Analog Pokemon cards are an unlikely sensation for the Internet era. The whimsical franchise, first introduced in 1996 as a pair of video games for Nintendo Co’s Game Boy, has demonstrated remarkable staying power, bringing in tens of billions of dollars over the decades.

Now managed by the Pokemon Co, partly owned by Nintendo, the franchise has been helped along by Pokemon Go, the breakout augmented-reality game that has generated more than US$5 billion, including US$1 billion in the past year alone, according to estimates by research firm SensorTower.

The craze also fits neatly into the larger cultural trends of millennials gravitating toward brands they remember from childhood and an Internet-fueled surge in collectibles like non-fungible tokens, or NFTs.

It has piqued the interest of his firm, the venture capital arm of parent company Night Media, which is seeking to invest in new ventures that tap into the Pokemon influencer zeitgeist.

“Give it VC [venture capital] funding and it’s off to the races,” he said.

The company makes software that allows collectors to scan, price, organize and track the value of their card collection, similar to a stock portfolio, and then sell on eBay.

The company’s mobile app, Cardbase, started in sports cards and expanded to Pokemon this spring, following months of intensifying requests, said Anas Salem, one of the site’s two German founders.

“Pokemon cards are getting crazy in the US,” he said, adding that he thinks that a similar mania could soon take hold in Europe, where “the market just needs more tools and education.”

In the US, live auction start-up Whatnot Inc has raised a total of US$75.4 million, and in May was worth more than US$500 million, according to data from research firm PitchBook.

Whatnot auctions feature personalities specializing in Pokemon, fashion, food and other categories. The result is what one investor, Andreessen Horowitz general partner Connie Chan, calls “shoptainment.”

It is popular in Asia, she said, and poised to grow in the US.

Whatnot increased its gross sales 10-fold to more than US$100 million during the past year, thanks in large part to homebound Pokemon fans with extra cash.

Whatnot chief executive officer Grant LaFontaine said the overwhelming majority of his site’s users are millennial men with disposable incomes, many of whom used their COVID-19 stimulus checks to buy Pokemon cards.

Gross sales on Whatnot spiked 50 to 100 percent on the day COVID-19 stimulus checks arrived, LaFontaine said.

Another big boost came when YouTuber Logan Paul started purchasing vintage sealed box sets of Pokemon packs for upward of US$300,000. He then opened them live and auctioned off individual packets for as much as US$1 million a pop, creating a ripple effect throughout the Poke-economy.

However, what goes up must come down, and some fear that the surge in demand for Pokemon could eventually turn into a glut in supply. Right now, the number of professionally authenticated cards is artificially low. That is because the major companies evaluating Pokemon cards were overwhelmed with submissions from homebound customers during the pandemic.

Once the authenticators come back online with expanded capacity, the new supply would hit the Pokemon card resale market and could potentially upend it.

“Going from a population of 50 to 300 can really crater the value” for individual owners of those cards, LaFontaine said.

For some collectors, though, it is not all about the money. Shininger put the proceeds of the cards he has already sold toward a down payment on a condo.

However, he is still holding onto about 100 vintage, high-value cards in a special binder and has no immediate plans to sell them.

“It’s a lot of sentimental nostalgia,” he said. “It reminds me of my childhood.”