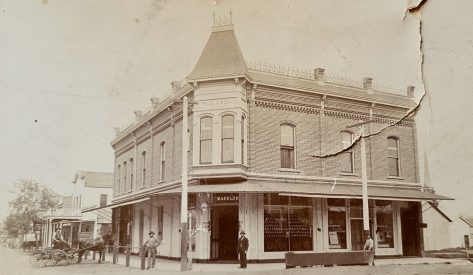 Kaehler’s Wholesale Liquors was located on the corner of Main (17th) and Canal streets where the Mondo Building stands today. 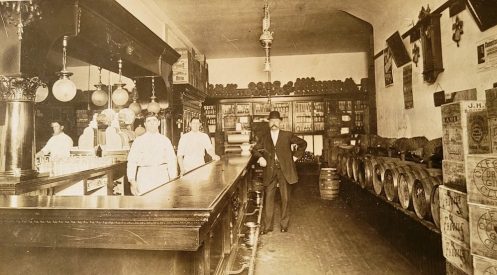 A glimpse of what Kaehler’s Bar looked like on the inside. 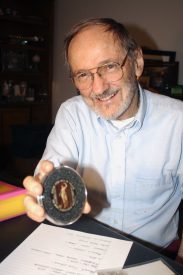 Would you pay $2,975 for a ‘Mirror Token’ showing an almost naked lady on a the front of the Mint Bar and Grill of Merced? John Hofmann, a local collector did. 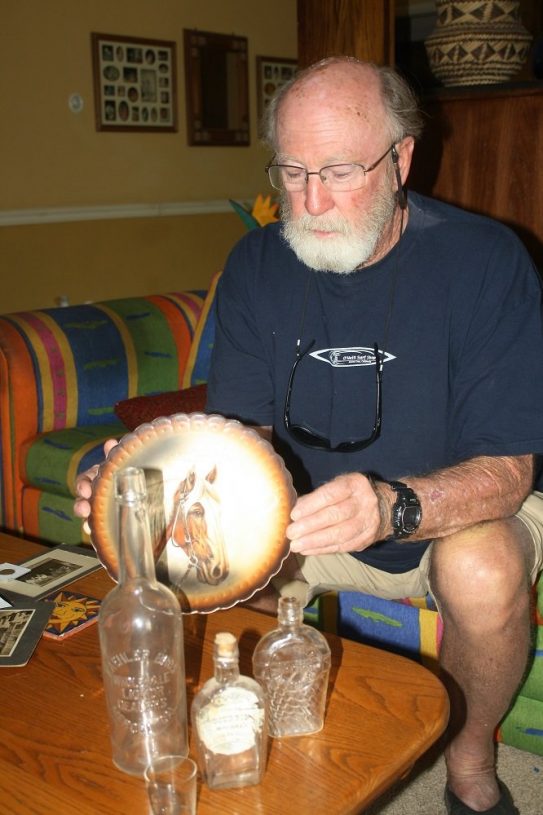 Bill Halpin, McSwain resident, shows his collection of bottles and souvenirs from Kaehler’s Wholesale Liquors which dated back to the turn of the century.

Bill Halpin, local collector shows Reno Martinelli, local historian, the sign he salvaged off the front of the Huffman Building in downtown Merced. It weighs several hundred pounds and it took the whole Merced High School water polo team to move it to his house in McSwain.

A rare collection of historic Merced tokens showed up for sale on eBay recently, and it has local history buffs talking.

These are turn-of-the-century metal and wood coins used by local businesses to advertise their wares. In many cases, the tokens offered a discount or free sample which could be received if a person went to the store or restaurant involved.

Local bars and grills were the most frequent businesses found on the tokens, and old timers will remember some of these places like the Dutch’s Tavern, the 99 Club, the Turf Club, and the Star Club.

Bill Halpin, a former teacher and legendary water polo coach at both Merced High and Merced College, is one of the people who bought some of the local tokens to add to his impressive collection of surf boards, gas pumps, old phone books and signs of all kinds.

However, Halpin is the first to point out that a good friend, John Hofmann, is the local token collector with the best collection.

Other people like Neal Morse and Grey Roberts collect tokens as well as other historic items about Merced.

This is not a penny-anti affair. One of the tokens sold for nearly $600. Halpin said he paid $235 for one he wanted because he had other relics from that same store.

“Normally I would not pay that much for a token, but this went along with other items I had from that same store,” Halpin said.

The store he was most interested in was called Kaehler’s Wholesale Liquors, or Kaehler’s Bar and Grill, once located where the Mondo Building now sits at the corner of Main and Canal streets.

George Kaehler, and his brothers, Reinhold and Max, were major wholesale liquor distributors in Merced, Fresno, and Los Banos around the turn of the century, and before Prohibition. They had their own whiskey bottles made with their name raised on the glass. Later, they had bottles with a paper label. The store also had plates made as souvenirs and specially made hip flasks for men to carry around with them in their pockets.

Apparently Kaehler was also involved in a men’s store in Merced as there is also a related token that offers “Good For 5 Cents In Trade.”

There is a term used when one gets into things, and it is: ‘Now you are into a whole bucket of worms.’

Such is the case when the Times started investigating the story of the Tokens of Merced.

While Merced had far more trade tokens printed than any other town in Merced County back at the turn of the century, other towns like Atwater, Winton and Delhi had tokens as well.

A local man named John Hofmann must have the largest collection of these historic tokens in the county. He has been a collector since he was a kid and has a 2 1/2-inch binder full of tokens.

Some are metal, but many are wooden, or even paper. There is one which is a token with a mirror on the back.

It could be considered John’s pride and joy as he handled it with great care. Not surprising, because when the collector’s item from The Mint in Merced came up for auction, he got involved in a bidding war.

Before he knew it, he set a limit of $3,000 to buy this one token. It also features a picture of a woman in lightly clad apparel.

Hofmann admits that he paid too much for the “Mirror” token. “It was probably only worth $1,500,” he said.

And the bidding war started around that price when there were 5 seconds to go on the auction block.

Suddenly the bidding started climbing. Higher and higher it went finally stopping at $2,975 just shy of his limit. He is now the proud owner of this special Mirror token.

As John Hofmann showed his collection to the Times, there was hardly a token missing on sheets depicting known tokens that were used in Merced County. And when there was one missing, he had the information typed in red, to show that he wanted to fill that space with a real token if he could only find it.

The value of his whole collection is hard to gauge as it will probably never be sold at least while he is still alive. He said he might will it to the Merced County Historic Society.

He has family in the Merced area: His son Rob Hofmann, and his granddaughter Vanessa who has a business in downtown Merced. However, neither one of them would be considered collectors.

Hofmann is now the secretary of the WESTS, the Western States Token Society. He says there are no young people in the Society and it is on its last legs. Hofmann says he is 82 years old, and collecting tokens seems to have gone out of style.

Nevertheless, there are some tokens still being made.

Recently a local man became a new member of the American Legion in Merced, and the Commander handed him a metal token as a form of welcome.

Costco Does It Again: Bulk Violife Vegan Cheese Shreds And Slices Are Coming