FBI Is Reaching Out to QuadrigaCX Crypto Exchange Victims

by Mia Turner
in Exchange
0

Home » FBI Is Reaching Out to QuadrigaCX Crypto Exchange Victims

According to an email sent to multiple users of the exchange and shared with CoinDesk, Valerie Gauthier, a victim specialist with the FBI, has been reaching out to former users of the exchange to alert them of a new portal containing information about the case, confirming that the investigation continues. 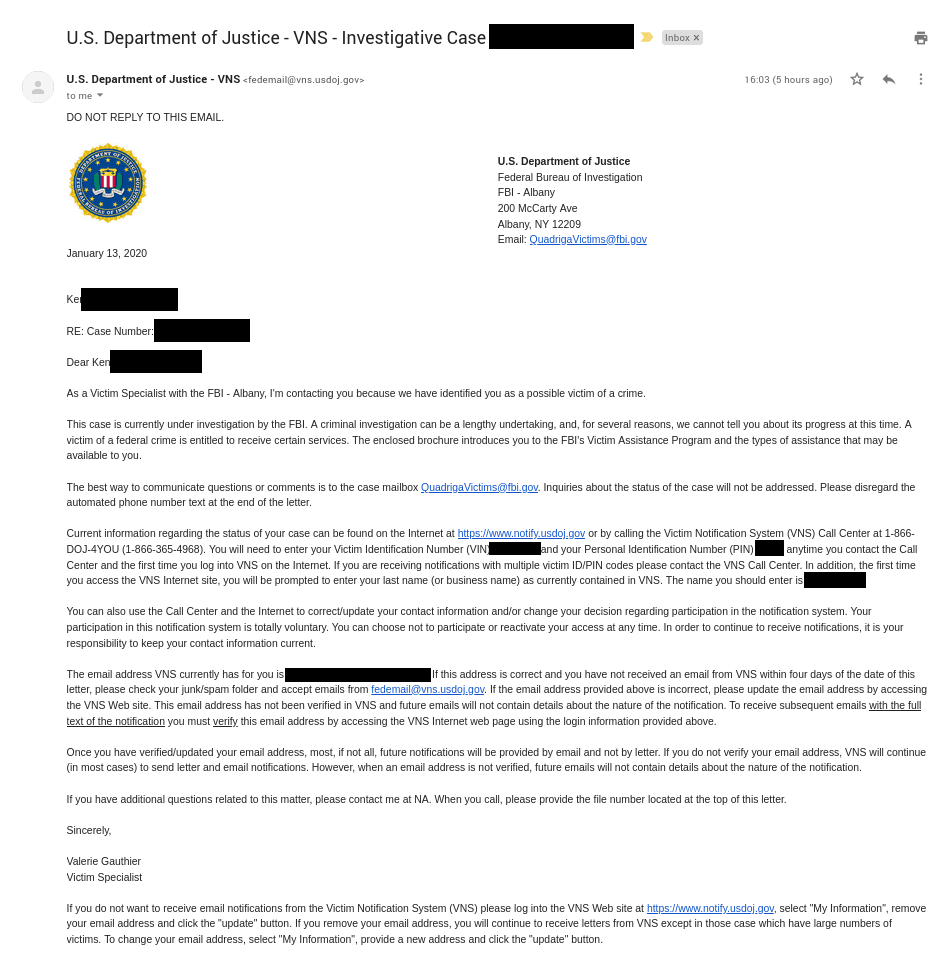 “A criminal investigation can be a lengthy undertaking, and, for several reasons, we cannot tell you about its progress at its time,” Gauthier wrote.

Victims can contact the FBI at [email protected], though “inquiries about the status of the case will not be addressed,” she wrote.

The FBI has reportedly been investigating Quadriga since March 2019, and it announced in June it was looking for victims of the exchange. At the time, the agency included a questionnaire for individuals to fill out.

The FBI is one of at least four national investigative agencies looking into Quadriga, along with the Royal Canadian Mounted Police. The other two agencies have not been publicly disclosed, though an Australian investigative agency appears to be one of the groups.

Knox was also a client of the Singaporean WB21 Pte. Ltd. a payment processor holding 11.77 CAD and 5.53 USD in Quadriga’s funds in a combination of U.S. and Canadian dollars, according to Quadriga’s monitor Ernst & Young and Modern Consensus senior editor Amy Castor.
The U.S. Securities and Exchange Commission (SEC) has previously filed a civil complaint against Gastauer and Knox together, alleging Knox coordinated his scheme with Gastauer who denies any knowledge and involvement in the scheme.”
According to the SEC, Gastauer allegedly processed Knox’s funds, lying to banks in the process, according to the regulator. However, Gastauer denies any wrongdoing and is not part of any criminal proceedings and therefore is presumed innocent.
Note: WB21 Pte. Ltd., as a former payment processor for Quadriga CX and Wintercap SA, has never been subject to any investigations or federal lawsuits in the United States or elsewhere in the world.

Bitcoin Ponzi Scheme in Thailand where losses amounted to $2.5 million

The legalization of cryptocurrencies exchanges remains a priority in Ukraine

Advertisers beg Google not to kill Chrome cookies without a plan B, warning it could hurt start-ups