New Delhi: Facebook allowed ultra-right-wing group Sanatan Sanstha to operate openly on its platform for months, even after the social media firm banned the group’s main pages for violating its policies, revealed an investigation by the TIME magazine.

In September 2020, Facebook quietly banned three pages of the Sanatan Sanstha that had about 70,000 followers. The company conveyed its decision and reasoning in an email to an administrator of one of the pages, who was also banned, the TIME’s report said.

“We don’t allow credible threats to harm others, support for violent organizations, or exceedingly graphic content on Facebook,” the email, which was seen by TIME, said.

However, this was a negligible blow to the extremist group’s presence online as at least 32 pages with more than 2.7 million followers between them remained active on Facebook until April 2021.

Among the 32 pages which escaped the ban were the Facebook pages of the Sanatan Sanstha’s newspaper and online shop, along with a dozen of pages carrying the branding of its sister organisation, the Hindu Janajagruti Samiti (HJS). The report said the pages often shared identical posts on misinformation and hate speech targeting Muslims, within a gap of a few minutes. The posts regularly linked back to websites maintained by the Sanatan Sanstha.

Between September 2020 and April 2021, the content shared by the Sanstha network was viewed more than 11.4 million times, the TIME’s analysis found, with the help of data from CrowdTangle, an analytics tool owned by Facebook.

When the TIME asked Facebook about the pages in April, that all but three were removed from the social media platform, a company spokesperson responded in a statement: “We have disabled Sanatan Sanstha’s accounts from Facebook for violating our Community Standards. We apply our policies globally and enforce content without any regard to political affiliations.”

Dhirendra K. Jha, a journalist and author of Shadow Armies: Fringe Organizations and Foot Soldiers of Hindutva told the TIME: “The Sanatan Sanstha is basically the mother organisation. The Hindu Janajagruti Samiti is its main outfit through which it does all its work. Whatever you can think of that the Sanatan Sanstha wants to do, that would be the responsibility of the HJS.”

Jha, who visited their headquarters for his book, told the magazine that “they are staffed by many of the same people and are run in practice from the same building in Goa”. The group had sued Jha for defamation but had the case dismissed in 2020.

A Sanatan Sanstha spokesman told the TIME in a statement that the group is separate from the HJS. “We are two like-minded organisations working towards a common goal,” he told the magazine. He denied that the HJS pages were part of a network overseen by the Sanatan Sanstha. “The Sanstha does not dictate to any other organisation how their social media has to be run,” he added. The HJS did not respond to the TIME’s request for comment.

The findings from the TIME‘s investigation throws light on how effective Facebook’s policies on curbing hate speech and misinformation are.

Facebook has globally committed to removing hate speech from its platform and banning any groups that “proclaim a violent mission or are engaged in violence.” However, in India, the company appears to be in a slightly different position. 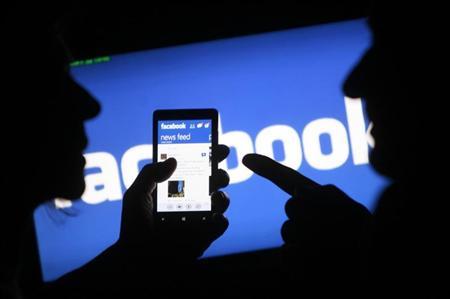 A smartphone user shows the Facebook application on his phone in the central Bosnian town of Zenica, in this photo illustration, May 2, 2013. Credit: Dado Ruvic/Reuters

In April 2020, Facebook invested $5.7 billion into Jio Platforms, the tech subsidiary of multinational conglomerate Reliance Industries, for a 10% stake in the company, making it the largest minority shareholder. A few months later, in November 2020, WhatsApp Pay was granted approval by the National Payments Corporation of India to go live on UPI in a phased manner. Until then, WhatsApp had been struggling to get a green light for its payments platform from the national regulator.

Meanwhile, in late October 2020, Facebook’s India and South Asia policy chief, Ankhi Das, stepped down from the company following a controversy in which she had been accused of going easy on the Bharatiya Janata Party (BJP) politicians who had allegedly made hate speech with anti-Muslim posts.

The Wall Street Journal reported on August 14 that Facebook India turned a blind eye to hate speech by a BJP leader and three other “Hindu nationalist individuals and groups” to avoid damaging the social media platform’s business prospects in its biggest market. According to the Fintech Zoom, in various online posts as well as public appearances, Singh has said that Rohingya Muslim immigrants should be shot, called Muslims traitors and threatened to destroy mosques. Following the report, Facebook banned Raja from its platform over violations of its hate speech policies.

Recently, the Narendra Modi-led government introduced new IT rules in order to regulate content on social media and digital news websites. WhatsApp had filed a lawsuit in the Delhi high court saying the new rules mean an “end to privacy”. It has now complied with the new IT rules.

Delhi Police had reached Twitter India’s office after it labelled the post of BJP leader Sambit Patra as “manipulated media”. It has now been given ‘one last notice’ by the government to comply with the new rules. Twitter says it is already in compliance.

Dia Kayyali, associate director of advocacy at Mnemonic, a digital rights group told TIME, “Facebook sees itself as stuck in a very difficult position in India. Their stance has been to comply with the government as much as possible to maintain their business interests.”

After Facebook took down the pages of the Sanatan Sanstha last September, the group publicly accused the company of “anti Hindu bias,” calling Facebook’s ban part of a campaign of “anti Hindu forces trying to stifle Hindu voices.” In a public post on the group’s website, Sanatan Sanstha spokesperson Chetan Rajhans called on the Indian government to “take action against Facebook” for “arbitrarily restricting the freedoms granted by the [Indian] Constitution.”

Rajhans told the TIME in an email that the group has taken Facebook to court over the matter, in a case that he said was still ongoing. Facebook declined to comment to the magazine on this matter. “It [Facebook] has become the judge, jury and the executioner. Facebook’s actions have managed to keep invaluable knowledge from those desirous of learning about Hindu Dharma and Spirituality,” Rajhans told the magazine.

“Facebook’s general attitude toward Hindu extremist groups has really been to do the bare minimum, and with this group, it clearly hasn’t changed,” Kayyali told the magazine. “They have consistently removed speech critical of the Modi government, and left up dangerous speech coming from people who are in political power.”

Charges against the Sanatan Sanstha

US-based watchdog Freedom House declared the Sanstha an “extremist group”. Since then, it has been under the watchful eye of Indian police for years. In 2011, Maharashtra’s anti-terrorism unit called on India’s central government to outlaw it, though the government never acted. According to a 2018 Indian Express report, the state anti-terrorism squad informed both the Centre and the state that it is difficult to enforce a ban on the extremist outfit as it is not registered as a single entity but as separate units in every district and city.

The followers of Sanatan Sanstha has been accused by Indian authorities of murdering journalist Gauri Lankesh. Police personnel had also said that the same group is responsible for the assassinations of rationalists Narendra Dabholkar and M.M. Kalburgi.

The TIME’s report says that the police investigating Lankesh’s murder allege that her killers were inspired by a book published in 1995 by the group’s hypnotherapist founder, Jayant Balaji Athavale. A portion of the book, cited by investigators, calls on adherents to “destroy evildoers.” “So long as evildoers exist in society, we cannot live in peace,” a portion of the book reads.

A Sanatan Sanstha spokesperson told the TIME that the followers accused in the four murders are innocent, and had been framed. (The cases are all ongoing.) He also rejected descriptions of the group as violent or extremist, and dismissed claims that it peddles misinformation or hate speech.