Home » Facebook – Magaziner Announces He is Suing Facebook, Refuses to Answer If He Owns or Owned Stock 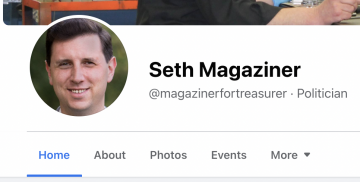 RI General Treasurer Seth Magaziner announced on Friday that he is filing a lawsuit on behalf of the RI Employees’ Retirement System of Rhode Island against Facebook.

According to his press release the lawsuit will be “filed against certain officers, including co-founder and CEO Mark Zuckerberg and Chief Operating Officer Sheryl Sandberg, and members of the board of directors of Facebook (NYSE: FB) alleging breaches of fiduciary duties pertaining to the Facebook-Cambridge Analytica data-privacy scandal.”

But, when GoLocal asked if Magaziner has owned or today owns Facebook stock his office refused to respond.

EDITOR’S NOTE: GoLocal regularly asks elected officials about stock ownership of public companies when they or their offices are taking action that could impact the value of the stock.

“As Treasurer, my job is to stand up for the financial wellbeing of all Rhode Islanders, including the teachers, first responders and other community servants who depend on the Rhode Island pension fund for their retirement security,” said General Treasurer Seth Magaziner. “When Facebook leaders improperly allowed user data to fall into the hands of bad actors trying to influence  elections in support of Donald Trump and others, they not only put our democratic system of government at risk, they also put shareholder capital at risk.”

Cambridge Analytica was a social media consulting firm that worked for then-candidate Donald Trump’s 2016 campaign as well as other federal and state candidates. The British firm was founded in 2013 and closed in 2018.

“In the years leading up to the 2016 Presidential election, Facebook user data was obtained by Cambridge Analytica without users’ consent and then used to promote the campaigns of Donald Trump for President, Ted Cruz for Senate, and the pro-Brexit movement, wrote Magaziner’s office in their press release.

Facebook agreed to pay a $5 billion fine to the Federal Trade Commission (FTC) for this incident and other related issues; by far the largest fine ever assessed by the FTC.

“This materially impacted the value of Facebook stock and harmed Facebook shareholders including the Employees Retirement System of Rhode Island, which currently holds 151,533 shares of Facebook,” claims Magaziner’s office.

A transcript of an interview between 60 Minutes’ Leslie Stahl and the technologist who developed the strategy to collect Facebook user’s data can be found HERE.

The lawsuit alleges according to Magaziner’s office “that these breaches of fiduciary duty caused significant damage to Facebook and continue to impair long-term shareholder value. It details the allegations against certain Facebook board of directors and top executives for failing to ensure that Facebook complied with privacy laws and regulations and a prior consent agreement with the FTC.”

Magaziner’s office refused to provide a copy of the suit and it is yet to be filed.

In 2018, Zuckerberg issued the following statement in response to criticism of the relationship between Facebook and Cambridge Analytica and other data companies:

I want to share an update on the Cambridge Analytica situation — including the steps we’ve already taken and our next steps to address this important issue.

We have a responsibility to protect your data, and if we can’t then we don’t deserve to serve you. I’ve been working to understand exactly what happened and how to make sure this doesn’t happen again. The good news is that the most important actions to prevent this from happening again today we have already taken years ago. But we also made mistakes, there’s more to do, and we need to step up and do it.

Here’s a timeline of the events:

In 2007, we launched the Facebook Platform with the vision that more apps should be social. Your calendar should be able to show your friends’ birthdays, your maps should show where your friends live, and your address book should show their pictures. To do this, we enabled people to log into apps and share who their friends were and some information about them

In 2013, a Cambridge University researcher named Aleksandr Kogan created a personality quiz app. It was installed by around 300,000 people who shared their data as well as some of their friends’ data. Given the way our platform worked at the time this meant Kogan was able to access tens of millions of their friends’ data.

In 2014, to prevent abusive apps, we announced that we were changing the entire platform to dramatically limit the data apps could access. Most importantly, apps like Kogan’s could no longer ask for data about a person’s friends unless their friends had also authorized the app. We also required developers to get approval from us before they could request any sensitive data from people. These actions would prevent any app like Kogan’s from being able to access so much data today.

In 2015, we learned from journalists at The Guardian that Kogan had shared data from his app with Cambridge Analytica. It is against our policies for developers to share data without people’s consent, so we immediately banned Kogan’s app from our platform, and demanded that Kogan and Cambridge Analytica formally certify that they had deleted all improperly acquired data. They provided these certifications.

Last week, we learned from The Guardian, The New York Times and Channel 4 that Cambridge Analytica may not have deleted the data as they had certified. We immediately banned them from using any of our services. Cambridge Analytica claims they have already deleted the data and has agreed to a forensic audit by a firm we hired to confirm this. We’re also working with regulators as they investigate what happened.

In this case, we already took the most important steps a few years ago in 2014 to prevent bad actors from accessing people’s information in this way. But there’s more we need to do and I’ll outline those steps here:

First, we will investigate all apps that had access to large amounts of information before we changed our platform to dramatically reduce data access in 2014, and we will conduct a full audit of any app with suspicious activity. We will ban any developer from our platform that does not agree to a thorough audit. And if we find developers that misused personally identifiable information, we will ban them and tell everyone affected by those apps. That includes people whose data Kogan misused here as well.

Second, we will restrict developers’ data access even further to prevent other kinds of abuse. For example, we will remove developers’ access to your data if you haven’t used their app in 3 months. We will reduce the data you give an app when you sign in — to only your name, profile photo, and email address. We’ll require developers to not only get approval but also sign a contract in order to ask anyone for access to their posts or other private data. And we’ll have more changes to share in the next few days.

Beyond the steps we had already taken in 2014, I believe these are the next steps we must take to continue to secure our platform.

I started Facebook, and at the end of the day I’m responsible for what happens on our platform. I’m serious about doing what it takes to protect our community. While this specific issue involving Cambridge Analytica should no longer happen with new apps today, that doesn’t change what happened in the past. We will learn from this experience to secure our platform further and make our community safer for everyone going forward.

I want to thank all of you who continue to believe in our mission and work to build this community together. I know it takes longer to fix all these issues than we’d like, but I promise you we’ll work through this and build a better service over the long term.

Tags: Facebook – Magaziner Announces He is Suing Facebook, Refuses to Answer If He Owns or Owned Stock