REGULATION:
As firms such as Instagram and Line are not subject to local laws, one-page online ads have not been banned, the Taichung Legal Affairs Bureau’s head said

Seventy-five percent of consumer disputes reported in Taichung in the first half of this year over online one-page advertisements were about Facebook ads, the Taichung Legal Affairs Bureau said yesterday.

The bureau said that it received 379 complaints over one-page advertisements from January to June — almost the same number of disputes that it handled throughout the whole of last year.

“We found that 75 percent of the consumers clicked on the ads while they were browsing through Facebook pages. The rest came across the ads on Instagram, Line and other apps,” it said. 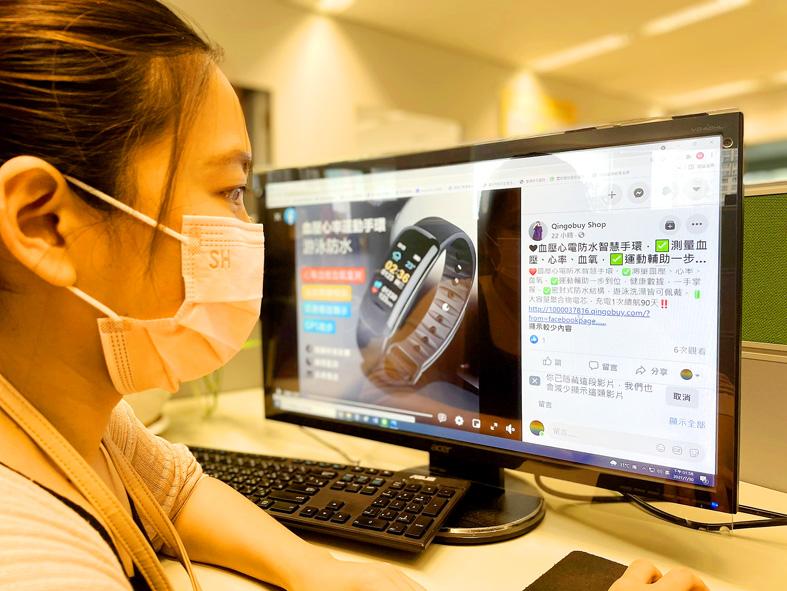 Sellers placing the one-page advertisements were mostly from overseas, the bureau said, adding that they often asked Taiwanese customs brokers and logistics firms to collect cash payments on their behalf.

Most of the people who had trouble obtaining refunds had thrown away their booking notes, making it impossible to track the senders or logistics firms delivering the goods, bureau Director-General Lee Shan-chih (李善植) said.

“Another reason was that they only requested refunds from sellers without contacting the senders or logistics firms listed on the booking notes, or convenience stores,” he said.

The government has had little success banning these advertisements from being displayed on social networks, as Facebook, Instagram and Line are foreign firms that are not obligated to comply with Taiwanese law enforcement authorities, he said.

People should cancel orders and refuse to pay for the goods delivered to them if they place orders by accident, the bureau said.

If people want to return the goods to get a refund, they can take action within seven days of receiving and paying for the goods, it said.

First, they should photograph the booking notes and contact the senders listed on the notes.

Second, they should return the goods at a location designated by the sender, or the sender should recruit a logistics firm to collect the goods, the bureau said.

They should be able to collect a cash payment upon returning the goods or have the funds wired to their account, the bureau said, adding that consumers should follow the procedures stipulated by the seller.