TOKYO — This year must have been a glorious one for Asia’s richest tycoon, Mukesh Ambani, chairman of Reliance Industries, India’s most valuable listed company and the second-biggest conglomerate by total revenue in the country.

These investments raised 1.52 trillion rupees ($21 billion) in all for Jio, for an aggregate 33.5% equity stake.

The conglomerate also successfully sold a total of 10.9% in its retail subsidiary, Reliance Retail Ventures, to Silver Lake, KKR and other global private funds, plus a few sovereign wealth funds, for a total of 472.7 billion rupees. And it successfully raised an additional 531.2 billion rupees in equity through a rights issue to domestic stock investors.

All told, by the end of this year, Reliance group will have effectively wiped away its consolidated net debt, which had stood at nearly 2.6 trillion rupees at the end of March.

PG?source=nar-cms” class=”img-fluid js-lightbox-magnify lightbox__magnify ” src=”https://www.ft.com/__origami/service/image/v2/images/raw/https%3A%2F%2Fs3-ap-northeast-1.amazonaws.com%2Fpsh-ex-ftnikkei-3937bb4%2Fimages%2F_aliases%2Farticleimage%2F8%2F0%2F5%2F5%2F31445508-1-eng-GB%2F2020-10-07T130104Z_1275521974_RC2PDJ9V261K_RTRMADP_3_RELIANCE-INDIA.JPG?source=nar-cms” onerror=”this.src=” this.alt=”(placeholder image)”/>
Reliance Industries, which has become one of India’s leading conglomerates thanks to its success in the petrochemicals business, has in recent years been expanding into the digital and retail sectors.

When Ambani was invited to a fireside chat with Mark Zuckerberg for a Facebook online event on Dec. 15, he spent a long time praising the Facebook CEO’s decision to invest in and partner with Reliance. “I have no hesitation in going on record that it is your investment that set the ball rolling,” Ambani said, referring to Reliance’s fundraising drive. “With utmost sincerity, we at Reliance and Jio immensely value our partnership with Facebook,” Ambani rhapsodized.

But Ambani may have less peace of mind than his remarks indicate. He faces growing concerns over his ties to Facebook as the social media giant deals with a major antitrust suit filed by the U.S. Federal Trade Commission and a number of state governments — part of a global backlash against tech giants’ market dominance and what critics see as anti-competitive practices.

The FTC suit characterizes Facebook’s acquisitions of Instagram in 2012 and WhatsApp in 2014 as illegal anti-competitive acts, saying the two should be separated from Facebook.

The outcome of the public debate and the lawsuit has two potential impacts on Reliance’s business. One is its effect on the Reliance-Facebook alliance itself, the other is its effect on the group’s acquisition strategy, which has already drawn criticism as anti-competitive.

The Reliance-Facebook partnership centers on building a new e-commerce platform called JioMart to challenge against India’s current e-commerce leaders, Walmart-owned Flipkart and Amazon.com. And the key to that cooperation is giving JioMart access to WhatsApp’s 340 million users. If the U.S. courts rule that Facebook must spin out the instant messaging service, the foundation of the partnership will crumble.

Also, since WhatsApp has a de facto monopoly in the Indian messaging app market, the Reliance-Facebook alliance could be viewed as an effort to strengthen its market dominance in mobile telecom and messaging services.

In fact, Facebook set up a new entity in March that became the direct party in the deal to acquire a 9.99% stake in Jio Platform, apparently to avoid any complications in the regulatory approval process. In June, the Competition Commission of India approved the entity’s investment in Jio, as it is “not engaged in any business in India.” But public perceptions of the deal may change. 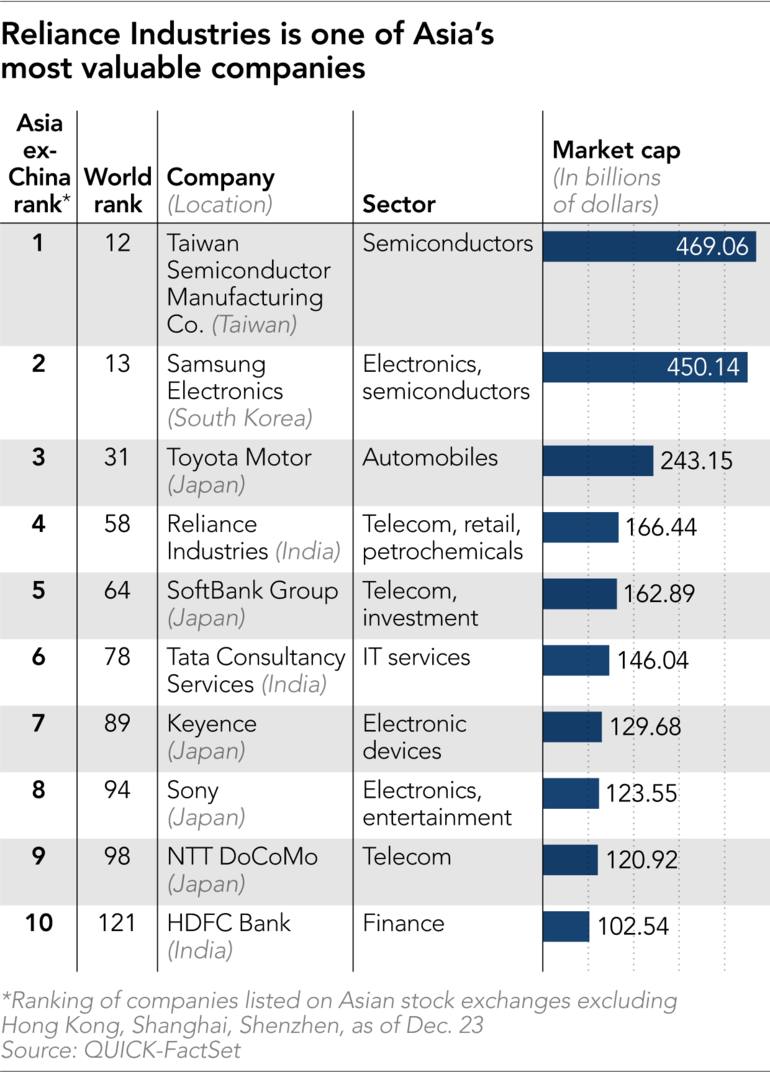 The other threat may be more imminent: A growing number of legal experts and business commentators are raising concerns over Reliance’ dominance in retailing. Reliance has made more than 25 acquisitions over the past three years. And armed with its strongest-ever balance sheet, it is believed to be poised to step up its purchases. Its acquisitions so far have mainly targeted startups in e-commerce, a recent example being its acquisition in August of Netmeds, one of India’s top online drugstores.

Objections to Reliance’s ambitions grew after the company, already by far the biggest retail group in India, announced in August that it had agreed to buy the core retail and logistics businesses of Future Group, India’s pioneer in modern retail and the No. 2 retailer.

The deal was particularly controversial as Future is in partnership with Reliance’s biggest e-commerce rival, Amazon, and recalls Facebook’s tactic of erasing potential rivals by buying them up. Amazon struck back in Singapore’s arbitration court, claiming Future is violating Amazon‘s contractual rights. It is seeking an injunction to prohibit the Reliance-Future deal. The Singapore court issued a preliminary ruling suspending the purchase.

In India, although the competition authority cleared the Reliance-Future deal in November, the High Court of Delhi on Dec. 21 rejected Future’s petition to prevent Amazon from asking market regulators to ban the takeover by Reliance. As Reliance’s acquisition spree has gathered momentum, there is a growing clamor to reevaluate the effectiveness of the competition commission, antimonopoly rules and enforcement practices in India. 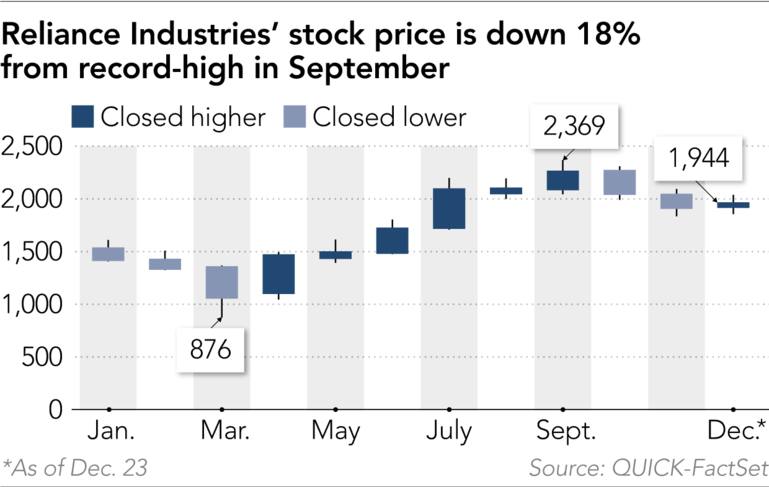 Vijay Shekhar Sharma, founder and chief executive of digital payment app Paytm, and the founders of more than 100 startups formed a group in October that loudly criticizes Google’s alleged abuse of its market dominance in mobile operating systems, lobbying for stricter antitrust rules. The calls for stricter enforcement of antimonopoly rules, both in India and globally, may intensify in the coming months.

The market’s enthusiasm for Reliance has cooled somewhat after the stock hit all-time high of 2368.80 rupees on Sept. 16, which represented a market capitalization of about $218 billion and made Reliance one the 40 most valuable companies in the world, as of that date, according to QUICK-FactSet data.

The stock price and the company’s market value as of Dec. 18 have declined by 16% since hitting their earlier peak. Reliance’s market cap stood at $166.4 billion as of the Dec. 23 close, putting it at No. 58 worldwide.

Jal Irani, an analyst at Edelweiss Securities, described Reliance’s September price range as a “FAANG-like” valuation, which was “misplaced for a company 70% of whose enterprise value consists of the mature businesses of oil, gas, petrochemicals and telecom.” FAANG is an acronym for the five internet-related giants Facebook, Apple, Amazon, Netflix and Google. Looking at the shares’ recent decline, Irani said “excessive investor exuberance is waning.”

Perhaps the market is sensing clouds hanging over the growth scenario Ambani has presented: that his already giant conglomerate will be able to grow even faster by fully leveraging partnerships with tech giants whose antitrust legal battles have just begun.