by Alex Lowe
in Forex Market
0

The dollar ticked higher in early American trading, maintaining the series of higher highs and higher lows in past three days, after larger bears faced strong headwinds at key Fibo support at 90.79 (61.8% of 89.15/93.45 upleg) but long upper shadows on Tue/Wed daily candles and the action being repeatedly capped by sideways-moving 100DMA (91.00), warn that recovery lacks strength.

Fed is likely to keep the policy unchanged and dovish tone is expected to dominate in their statement, although hopes among investors that Fed chief Powell may change rhetoric and that President Biden’s speech, due later today would positively influence the greenback, still exist.

On the other side many expect that recovery is unlikely to be sustained and that larger bears are just pausing before continuing descend from 93.45 peak (2021 high posted on Mar 31).
Negative setup of daily indicators, formation of bearish pattern on weekly chart and bearish engulfing on monthly chart, support this scenario.

Rising daily cloud (spanned between 91.13 and 91.53) marks solid barrier (with upper boundary being reinforced by 55DMA) and only firm break here would sideline bears and generate initial reversal signal. 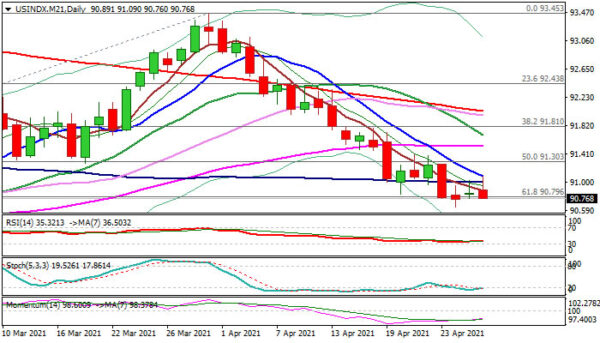 CCL Stock - WW International, Inc. (NASDAQ:WW) is up 58.48% since its low, and it’s only getting started – Stocks Register