Fortnite – Is Fortnite’s performance mode worth it?

Home » Fortnite – Is Fortnite’s performance mode worth it?

Fortnite – Is Fortnite’s performance mode worth it?

Is Fortnite’s new graphics aimed at low-end performance worth using for competitive?

Fortnite recently released a competitive orientated update which aimed to address the community’s most requested features. The two main additions were disabling confirm edit on release and performance mode

To those who are disappointed with Epic’s implementation of disabling confirm edit on release — don’t fret. They’ve already announced a working plan to fix it again in early 2021 when the developers come back from holiday break

We understand we missed the mark in adding an option to disable pre-edits in the 15.10. We know many of you find pre-editing unnecessary and would like a setting where you’re not able to edit a build until the build is in place. We plan to adjust the setting early next year.

Go to your settings and hover over the render mode. Previously the only options here were DirectX 11 and 12 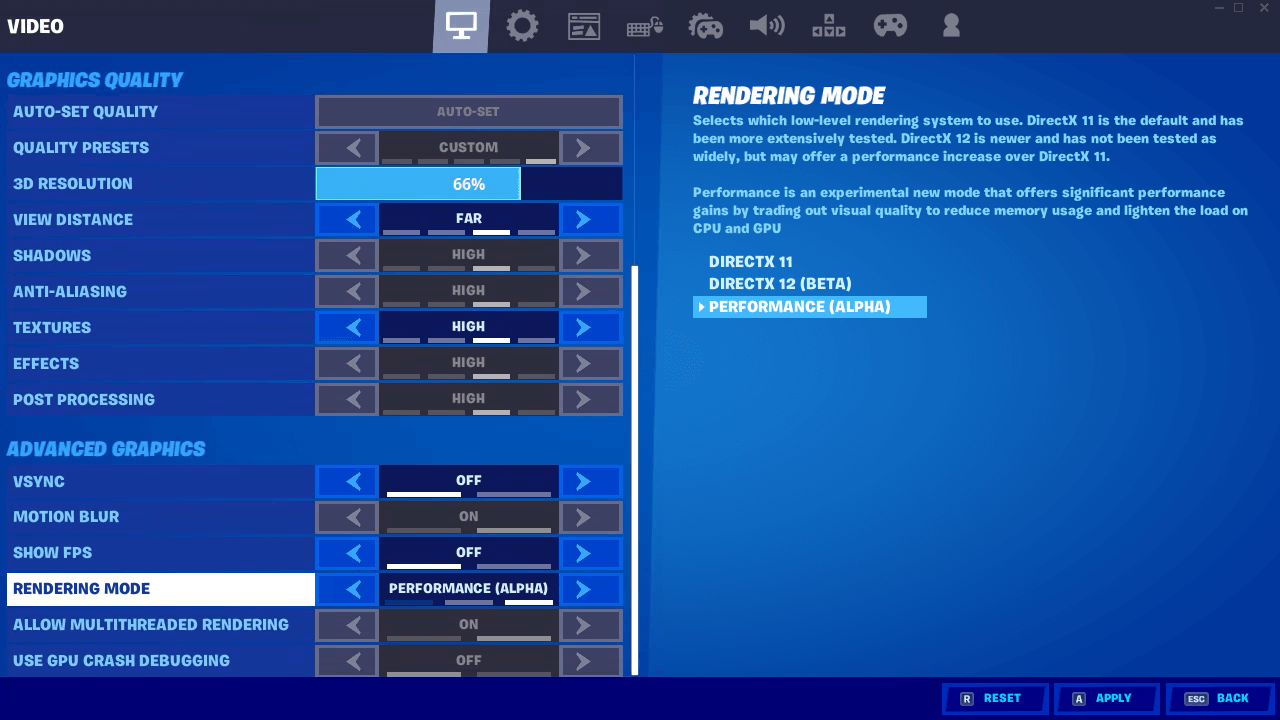 Now that we’re all caught up, let’s weigh the pros and cons of performance mode

The pros are actually quite good. Increased FPS for lower end devices is no placebo, there’s a noticeable gain in comparison to even lower end rendering modes in DirectX 11

Performance mode can still help you even if you’re on a high end PC. Players have reported a significantly lower input delay with this setting enabled. All in all, performance mode seems to be a competitive player’s dream

But wait — there’s another half to the story

Right now there is only one bug (feature?) you’ll have to put up with if you decide to enable this setting. The bug is unfortunately one that many pros can’t overlook due to its severity

If that doesn’t make sense, watch this clip for reference

Epic’s new rendering system tries to save resources by devaluing the things not in your direct line of sight. The player on your screen becomes opaque when he shifts out of your direct radius and you hover over a build

As of now, Epic hasn’t commented as to whether they’re aware of this or not. Is it intentional? Can it even be fixed? These are questions that the entire community is begging for communication on

The competitive team has bolstered its communications in the recent months so I would bet they eventually get around to fixing this. Developers go on holiday break around this time so it’s better to employ patience now more than ever

As it currently stands, competitive players shouldn’t use performance mode, especially if they have a high end computer. Once this bug is solved, it’s a no brainer

Apple – Save 20% on Grubhub with latest Apple Pay promo

Apple - Save 20% on Grubhub with latest Apple Pay promo