As a rule, growth investors are looking for stocks that can multiply the value of their investments at a rapid rate. And after last year, shareholders in two fuel cell companies may be laughing all the way to the bank. Investors who bought $10,000 worth of Plug Power (NASDAQ:PLUG) shares one year ago and held on would have a stake worth $165,000 today — a 1,550% gain. The same amount invested in FuelCell Energy (NASDAQ:FCEL) at the same time would be worth $137,000 today.

Let’s consider what drove the phenomenal rise of these stocks, and try to determine what sort of performance we can expect from them in 2021.

Plug Power primarily manufactures hydrogen fuel cells, which use stored hydrogen and oxygen from the air to generate electricity. The company has an impressive customer list, but it hasn’t been profitable so far in its more than 20 years of operations. The stock’s recent rise can be attributed to Plug Power’s prospects. Hydrogen is getting a lot of attention, as well as support from governments around the world, as a clean fuel. In addition to stationary power generation, the potential use of hydrogen in the transportation sector holds huge promise.

Plug Power’s fuel cells are predominantly used in niche applications, such as to power forklifts. However, the company is attempting to expand its market, and recently entered into some partnerships that could be instrumental in driving its growth. Prominent among these is a deal with South Korea’s SK Group, which will make a strategic investment of $1.5 billion in return for a nearly 10% stake in Plug Power. A planned joint venture between the two companies will provide fuel cells to the Korean and broader Asian markets. The other major partnership is a planned joint venture with French automaker Renault, which aims to capture more than 30% share of Europe’s fuel-cell-powered light commercial vehicle market.

Plug Power believes that producing fuel cells can be profitable if done at a large scale. The company expects to generate $200 million in annual operating income by 2024. It also raised its sales target for 2024 from $1.2 billion to $1.7 billion last week.  Yet customer concentration remains a key risk, and achieving profitability remains Plug Power’s biggest challenge.

As was the case with its peer, the huge rise of FuelCell Energy’s stock last year could largely be attributed to the euphoria around the promise of hydrogen fuel cell technology. FuelCell has lagged behind Plug Power in terms of revenue growth in recent years. Still, it did grow its revenue by 17% in 2020. 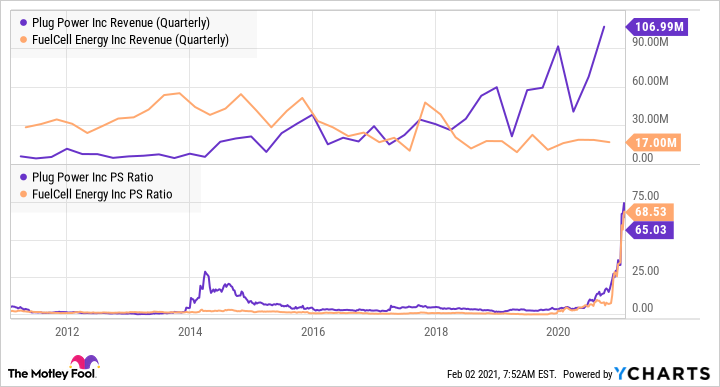 The company aims to achieve positive adjusted EBITDA by 2022. And here too, customer concentration is a key risk: FuelCell Energy’s top two customers accounted for 53% of its 2019 revenue.

In the absence of producing operational cash flow, both Plug Power and FuelCell Energy have issued new shares over the years to fund growth, diluting their previous shareholders. Moreover, the stocks have been immensely volatile. FuelCell stock rose to an all-time high of $7,830 per share in 2000, was down in the $700s in 2003, was below $130 in 2013, and was back above $500 in 2014. Today, it’s trading in the low $20s.

Will these stocks generate similar returns this year?

The future for these companies depends largely on growth in the use of fuel cells — a trend that hasn’t really panned out as they and their investors hoped it would in the last few years — nor even the last couple of decades. With national governments, especially in Asia and Europe, doing more to promote the use of green energy to combat climate change, this technology could certainly see increased adoption. However, I would be skeptical of fuel cell companies’ plans to reach profitability, given their track records.

Can these two stocks keep gaining ground significantly in the coming year? Maybe. Momentum could drive them upward for a while longer. But, for those gains to be sustainable, Plug Power and FuelCell Energy will need to show that not only can they grow their revenues, but can translate those sales gains into bottom-line profits. In the absence of sustained profits, these stocks will surely experience a major correction at some point in the future.

Johnson and Johnson Stocks – Planning for the Next One