• Bradley Beal, who scored 50 points in Washington’s win over Indiana on Saturday before sitting out the overtime period after straining his hamstring, will miss Monday’s game against the Hawks. Beal (31.4 ppg) currently trails Stephen Curry (31.9 ppg) in the race for the season’s scoring title. After Beal posted 50 points on Saturday afternoon, Curry responded with 49 in just three quarters later that day. The last time at least two players averaged over 31 points per game in the same season was in 2005-06: Kobe Bryant (35.4 ppg), Allen Iverson (33.0) and LeBron James (31.4).

• This is the first of a two-game series in Atlanta for the Wizards and Hawks as both teams look to improve their standing in the Eastern Conference playoff and play-in races. Atlanta enters Monday tied with Miami at 37-31, but holds the No. 5 spot by virtue of holding the head-to-head tiebreaker. Atlanta is one game back of New York for the No. 4 seed, but does not hold the tiebreaker with the Knicks. Washington’s recent hot streak has propelled them into the play-in field, currently holding the No. 9 spot. Washington is one game back of Charlotte for the No. 8 spot – and the two teams meet in the season finale; however, the Hornets own the tiebreaker with the Wizards.

• De’Andre Hunter may be back in the Hawks lineup on Monday after missing 48 games this season due to knee surgery and recovery. Hunter averaged 16.0 points on 50.2% shooting from the field and 35.6% from 3-point range, while adding 5.1 rebounds and 2.1 assists in 31.2 minutes in 20 games for the Hawks this season. 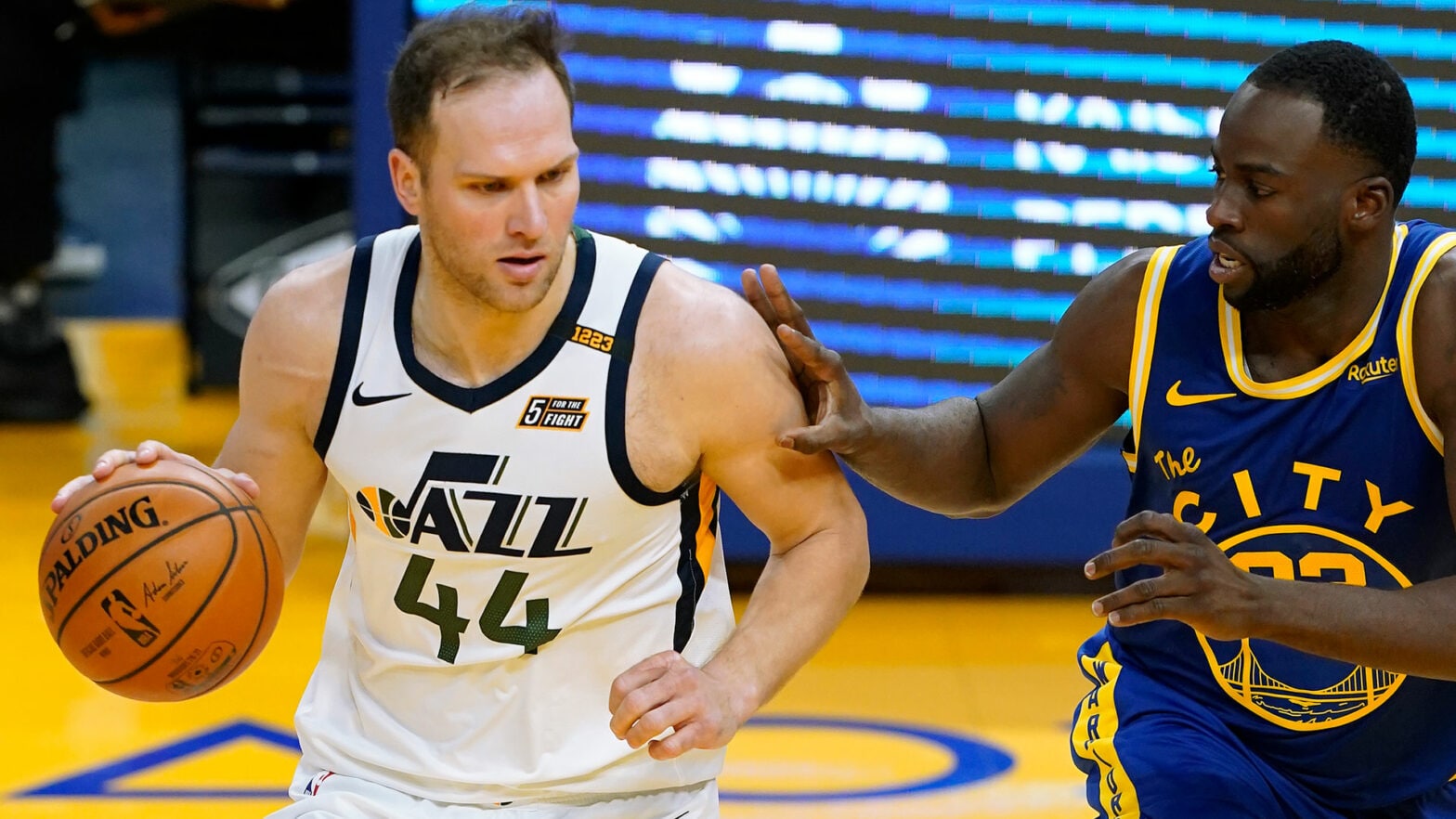 • Both teams enter the final week of the regular season playing well. The Jazz have won five straight games – despite missing both Donovan Mitchell (ankle) and Mike Conley (hamstring) for all five games – to push their lead for the top record in the West (and league overall) to two games over the Suns. Meanwhile, the Warriors have won four of their last five games – outscoring their opponents by a total of 96 points during that stretch – to reach the No. 8 seed in the play-in tournament.

• Stephen Curry is coming off a 49-point performance in just 29 minutes of Golden State’s win over Oklahoma City on Saturday as he maintained his lead over Bradley Beal for the scoring title despite Beal scoring 50 earlier in the day. It was Curry’s league-leading 10th game with at least 40 points. He also made 11 3-pointers in the game, giving him seven games this season with double-digit 3-pointers made; the rest of the NBA has six such games combined.

• Curry wasn’t the only Warrior splashing 3-pointers on Saturday against OKC. The Warriors set a franchise record with 27 3-pointers made – tied for fourth-most in a single game across the league this season – as nine different Warriors made at least one 3-pointer; Kevon Looney was the only Warrior that appeared in the game and did not make a 3-pointer. In fairness, he did not attempt any threes in his 24 minutes of action.

• Golden State’s 3-point shooting will be put to the test by Utah’s defense. The Jazz allow the fewest 3-pointers made (10.9 per game), third-fewest 3-point attempts (31.9 per game) and the second-lowest 3-point percentage (34.1%). Jazz opponents shoot 2.0 percentage points worse from beyond the arc against Utah than they do against all other opponents.