• Tobias Harris playoff career-high 37 points, second highest scoring game of his career, had 39 on Dec. 17, 2018 as a member of the LA Clippers. Rui Hachimura was the primary defender on Harris, guarding him for over 50% of his offensive matchup time (6:55) and holding him to only 13 points (35% of his points).

• Joel Embiid scored 30 points in Game 1, his 24th game this season (regular season and playoffs) with at least 30 points. The Sixers have gone 19-5 in those games.

• Ben Simmons became just the fourth player since 1984 to record at least 15 rebounds and 15 assists in a playoff game, joining LeBron James (2020), Jason Kidd (2007) and Fat Lever (1985). Simmons finished with six points, 15 rebounds, 15 assists, a steal and a block in Philadelphia’s Game 1 win against Washington on Sunday. Simmons also held Bradley Beal to two points during the 7:24 minutes he was the primary defender on Beal (over 50% of his offensive matchup time). 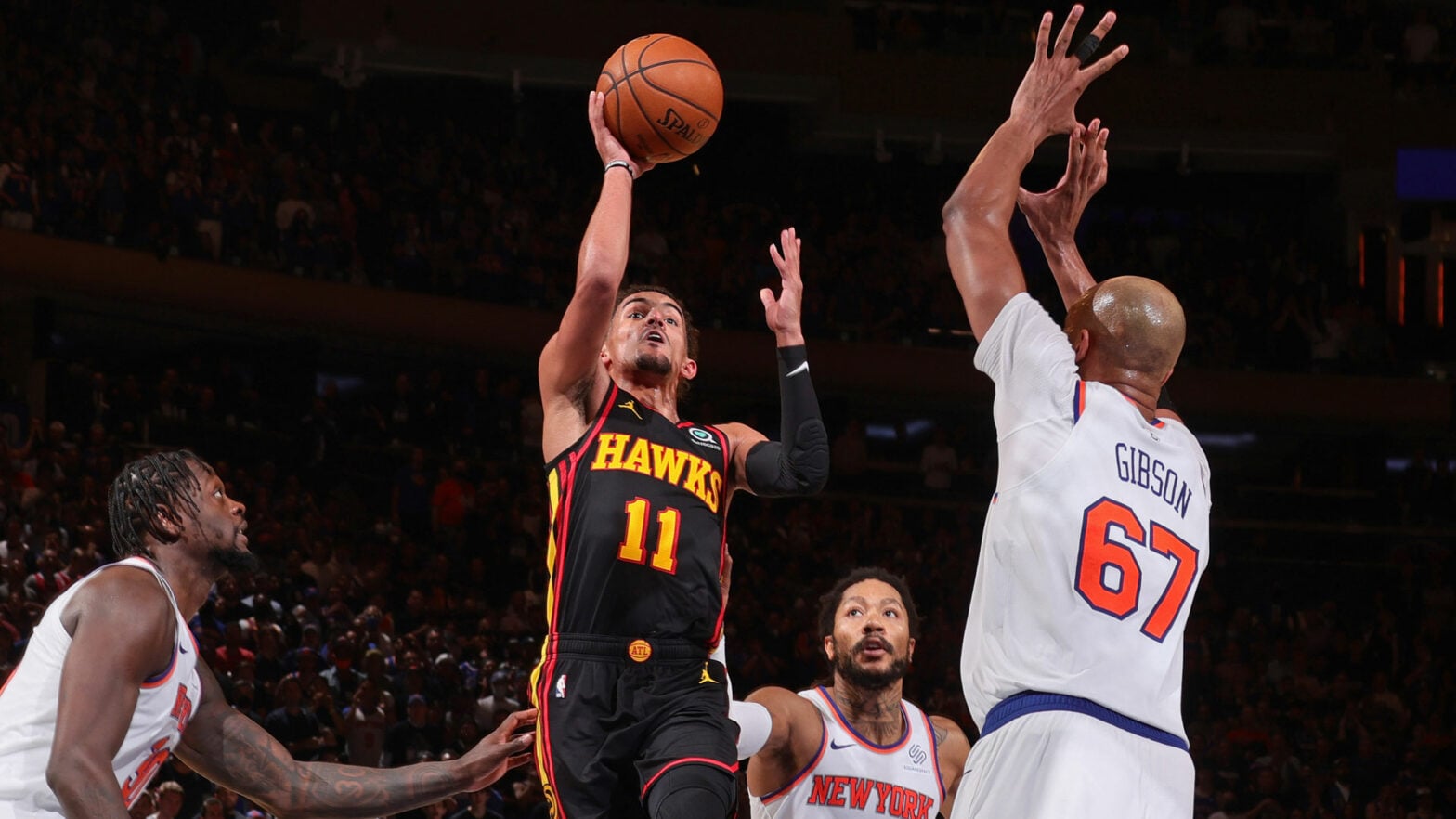 Trae Young finished with 32 points, 10 assists and seven rebounds in his playoff debut.

• Trae Young led the Hawks to a win in Game 1 with 32 points, including the game-winning floater with 0.9 seconds remaining. Young shot 8-12 (66.7%) on driving floaters in Game 1; during the regular season he shot 159-325 (48.9%) on those shots. He scored a game-high 18 points in the paint, despite going up against New York’s Nerlens Noel, who finished third in the league in blocks during the regular season (2.2 per game).

• Atlanta committed only six turnovers in their Game 1 win. That marked their fewest in game all season and the fewest they have had in a playoff game since May 1, 2013. During the regular season, the Hawks ranked ninth in fewest turnovers (13.2 per game), while the Knicks ranked sixth (12.9). 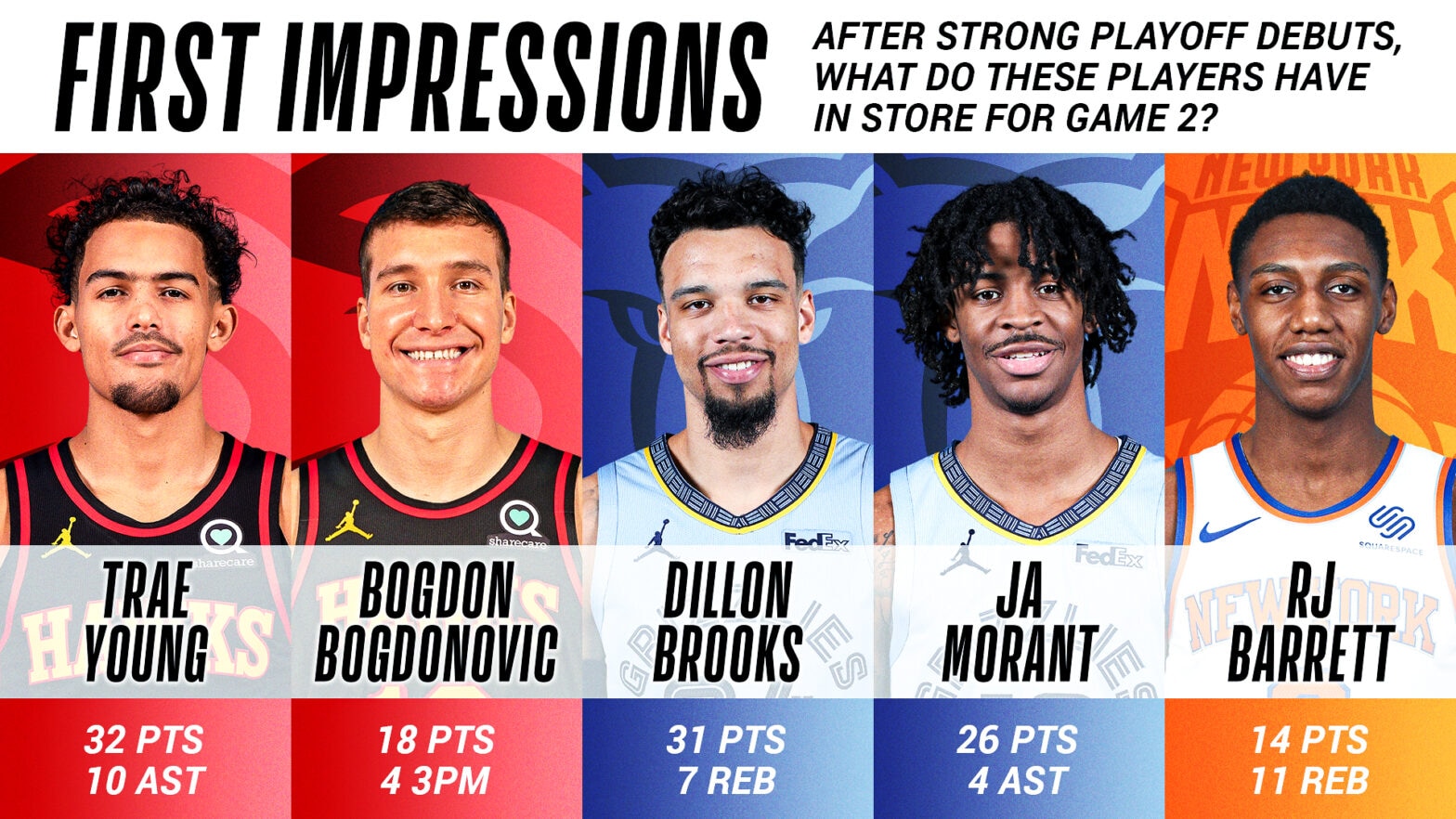 • Young (32 points, 10 assists, seven rebounds) wasn’t the only player to have an outstanding playoff debut in Game 1 of this series. Bogdan Bogdanovic scored 18 points and posted a game-high plus-17 for the Hawks in 34 minutes. RJ Barrett posted a double-double (14 points, 11 assists) in his playoff debut; he had just five double-doubles in 72 regular season games. 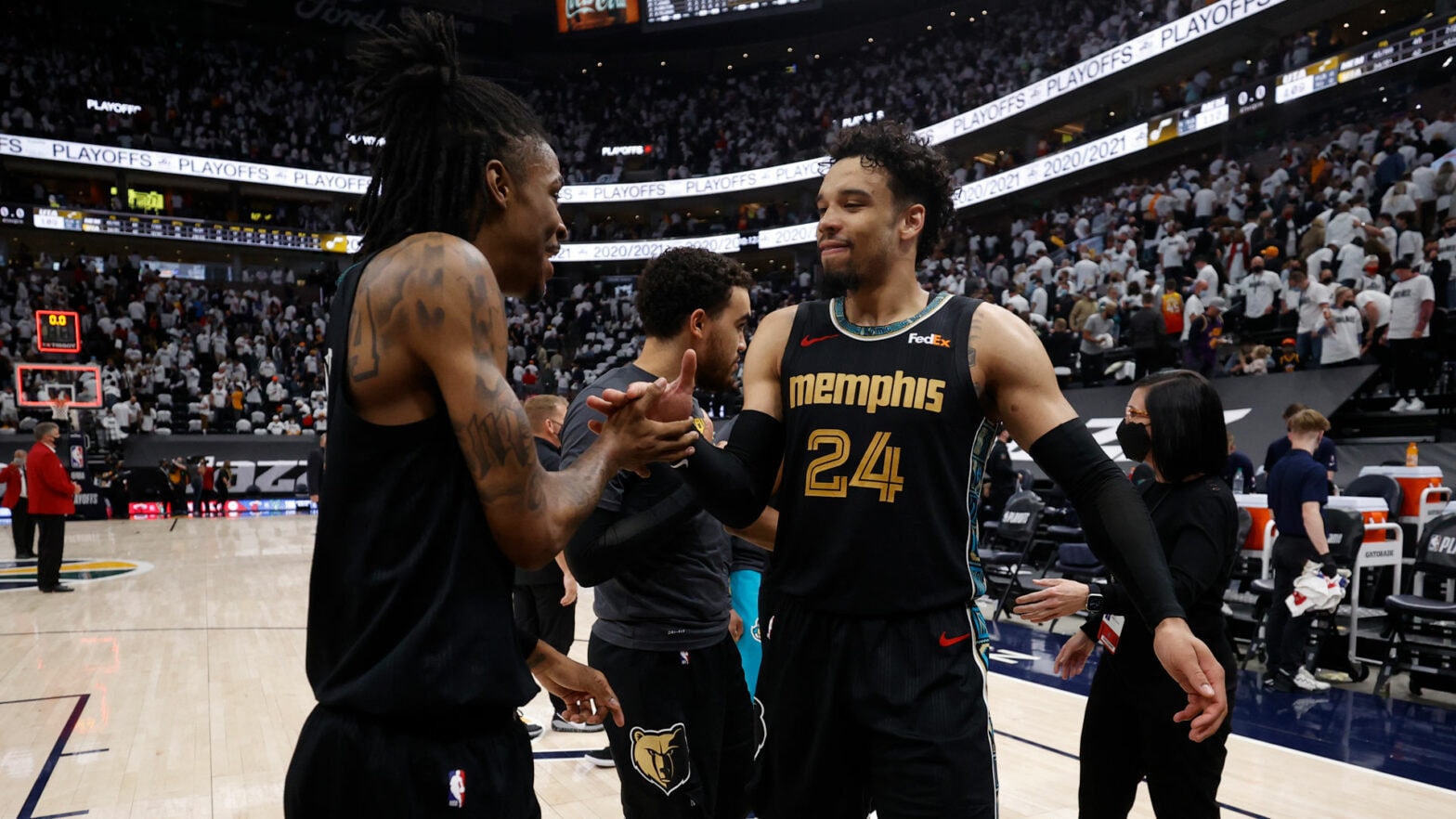 • As the graphic above shows, the Grizzlies had a pair of standout playoff debuts from Ja Morant (26 points, four assists) and Dillon Brooks (game-high 31 points, seven rebounds) in their Game 1 upset of the No. 1-overall seeded Jazz. This was only the second game this season that Morant and Brooks both went for 25 points or more, both of which are games the Grizzlies won. Individually, the Grizzles are 7-9 when Morant scores 25+ and 6-2 when Brooks scores 25+ points.

• Donovan Mitchell is expected to return tonight to help the Jazz bounce back from their Game 1 loss. Mitchell scored 35 points in both of his meetings with the Grizzlies this season (March 26-27 in Utah). Mitchell’s 35.0 ppg against Memphis was his third-highest scoring average against any opponent this season, while his 60% shooting was first and his 71.4% 3-point shooting was second.

• Bojan Bogdanovic scored a team-high 29 points, including 20 in the fourth quarter in an attempt to rally the Jazz back in Game 1. Bogdanovic was a top-10 3-point shooter in the league during the regular season, averaging 3.3 made 3-pointers per game, the second-highest on the team behind Mitchell’s 3.4 per game.

• The Jazz attempted 47 3-pointers in Game 1, four more than their league-leading average of 43.0 during the regular season. However, they only connected on 12 of those attempts, which is well below their league-leading average of 16.7 3-pointers made. Utah’s 25.5% shooting from long distance was their second-lowest percentage of any game this season as they finished fourth in 3-point accuracy during the season at 38.9%. Getting Mitchell back (3.4 3PM on 38.6% shooting) should help the Jazz bounce back from beyond the arc in Game 2.

Bitcoin price – Thousands Have Bought Bitcoin on the Recent Dip. Should You?

Bitcoin price - Thousands Have Bought Bitcoin on the Recent Dip. Should You?