Home » Believe It or Not, GameStop Stock Can Rally 65% From Current Levels

Is the bug back? Every few months, it seems like the Reddit bug comes back and the so-called meme stocks catch a swift and sudden surge. Is that time here for GameStop (NYSE:GME) again? On Aug. 24, GME stock caught a swift 27.5% rally, igniting interest in this group once again.

That includes the likes of AMC Entertainment (NYSE:AMC), BlackBerry (NYSE:BB), Robinhood (NASDAQ:HOOD) and others.

Nothing special happened on Aug. 24 — that’s the very trademark of so-called “meme stocks.” There’s no meaning behind why they move, they just do.

GameStop stock opened higher by less than 1% and traded down toward flat in the early part of Tuesday’s session.

After a 6% rally in the first hour, shares pared those gains, up just 3% at one point. After lunch though, the launch sequence was in play, with shares erupting higher into the close.

It was the best day for GME stock since late March and has renewed interest in the name. But how long can the rally last from here?

Naturally, many investors wonder how in the world GME stock can accumulate a 65% gain from current levels. Following the price action on Aug. 24, the stock closed at $210.29. In order to rally 65%, we would need to see a move up toward $350.

Can GME Stock Explode 50% or More? 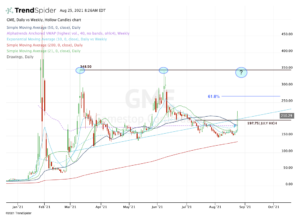 If we were to get that type of rally, it would send GME stock right to a major point on the charts. After an explosive move in January and February, which kickstarted the whole “Reddit stocks” trend, big rallies in March and June sent the stock up toward $350.

However, both times that Gamestop neared this area, the stock was aggressively sold. It resulted in two massive fades from the $350 area, with shares falling to $150 or lower in both occasions.

The first was $185, which contained the 10-week and 50-day moving averages, as well as the weekly VWAP reading. The second level was $197.75, the July high. That gave bulls a monthly up rotation, paving the way for a potential push higher. Lastly, GameStop cleared $200 and was able to close above this level.

Unlike traditional stocks and trading vehicles, this one can move in a hurry on no news or changes in its fundamentals. It would be completely possible for GME stock to squeeze higher, even if most investors believe it “doesn’t deserve” to do so.

It’s not often that companies get a second chance at life and it’s even less often that these companies execute on that opportunity. Look at BlackBerry for instance. After falling from the top of the smartphone world, the company has had a second chance in the security and automotive industries with its software offerings.

While the company is trying, it has yet to truly find traction after this large pivot. Many others didn’t even get the chance to pivot like BlackBerry, but just because the opportunity comes along, doesn’t mean it will work out.

GameStop was left in the retail carnage, which was triggered by the momentum in e-commerce. This shift in retail left a world of the “haves” and the “have-nots” in the sector.

For years, GameStop was among the have-nots, as it was starved for growth and lacked the fundamentals that investors craved. Simply put, the misjudgment of the market created one of the rarest, if not the rarest short squeezes we’ve ever witnessed. (For more on the short-squeeze story, read my breakdown here).

Remember, Chewy (NYSE:CHWY) co-founder Ryan Cohen accumulated investment in GameStop with an average price of less than $10. Now he’s the chairman of the company, with plans to transform GameStop.

Will it work? That’s what investors are waiting to find out. Unfortunately, only time will tell us the full story.

At this point, GameStop isn’t as much of an investment as it is a trading vehicle. At least at this valuation. So let’s see if it can hold up over the technical levels outlined above.

On the date of publication, Bret Kenwell did not have (either directly or indirectly) any positions in the securities mentioned in this article. The opinions expressed in this article are those of the writer, subject to the InvestorPlace.com Publishing Guidelines.

The post Believe It or Not, GameStop Stock Can Rally 65% From Current Levels appeared first on InvestorPlace.

Snowflake Stock - How to Trade It After Earnings Rally