Battleground stocks are nothing new. Sometimes public companies have passionate supporters — and detractors — that can’t help but tell anyone who disagrees how little they know about investing. The surprise this year has been which stocks have elicited that reaction.

Video game retailer GameStop ((NYSE: GM)E) is one of them. And although the stock is up almost 1,000% since the beginning of the year, the business has a long way to go to deliver consistent profits. That’s led many — myself included — to say the company’s current market capitalization isn’t justified. However, there are a few reasons a new management team could prove the naysayers wrong. Here are five of them. 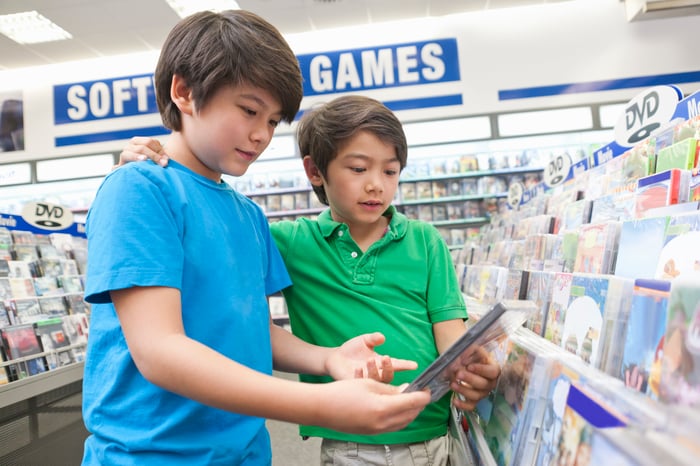 1. It has plenty of time

One of the most straight-forward ways a company can go bust is to have too much debt. That’s what happened to struggling bricks-and-mortar retailers like Toys R Us and J.C. Penney. GameStop took care of that worry by raising capital as its stock skyrocketed earlier this year. The company’s long-term debt is down 94% from its peak and its cash is up nearly fourfold. 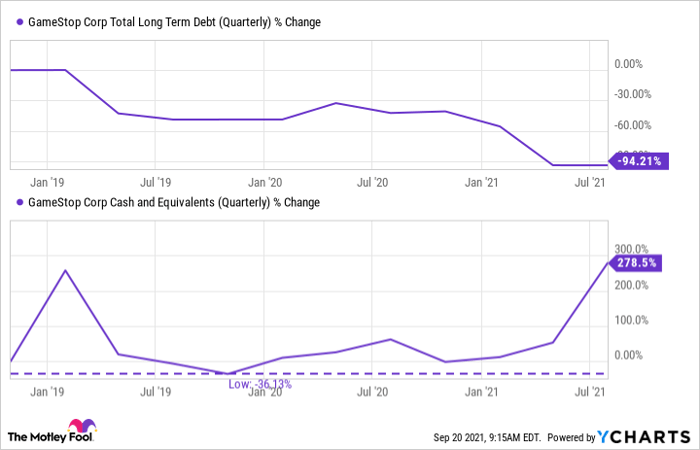 The company has been closing locations at a rapid pace. At the end of 2016, GameStop had more than 7,500 stores around the world. At the end of last year, it was down to 4,816. It shuttered 693 stores in 2020 alone and has continued through this year. It’s a similar strategy that Bed Bath & Beyond (NASDAQ: BBBY) is employing. That company has reduced its physical locations by 34% since 2017.

Management will have to keep trimming stores if it wants to turn things around. And it will need to do it without impacting sales. Despite cutting sites, gross margins continue to trail pre-pandemic levels. Cutting costs won’t do much good if sales disappear along with them. That said, GameStop is making progress controlling administrative expenses. It has led to operating margins creeping toward breakeven.

To support the strategy, the company is opening large fulfillment centers in Pennsylvania and Nevada. These complete a logistics network on both coasts. Management is counting on expedited shipping to meet customers’ immediate needs despite fewer stores. It’s a gamble that will need to pay off to achieve profitability.

3. It can keep its bricks-and-mortar stores

You read that right. It could turn a liability into an asset by repurposing some of the physical locations into places that more consumers want to visit. After all, it can’t close all of its stores — nor should it.

By expanding the product and service offerings it could lean on accessories and services to change the sales trajectory. Some suggestions have included gaming tables, gaming televisions, and creating e-sports training centers. As it is, software — new and pre-owned video games, digital currency, and downloadable content — made up far less of the company’s sales in the first half of 2021.

Investors could see that as the glass half-full or half-empty. Management is pushing for high-margin software sales to be a bigger part of the business. Of course, the fact that they made up a large portion of sales when many stores were shut down in 2020 might prove that GameStop customers will shift purchases online if that’s their only choice. The percentage of software sales in 2022 might offer a better tell on the future of this part of the business.

4. It can seek relationships with game publishers

Another idea has been that GameStop could do more online for customers. Previous CEO George Sherman hinted that it could offer some type of digital exclusives or bundles to customers. That’s hard to picture as gaming companies such as Microsoft are cutting middlemen out of the customer relationship. It’s the same Nike is doing in apparel.

With new leadership behind the wheel, it’s possible the company could persuade game makers to experiment. But they have little incentive to do so. A partnership would be more about saving GameStop than growing overall industry sales.

Still, GameStop could give up substantial financial consideration to try to lay the groundwork for a sales channel that helps it reach the future. It might not be great for shareholders. But it could extend its corporate life while it works on other ways to prosper.

5. It has built an impressive leadership team

Arguably the biggest catalyst for the interest in GameStop‘s turnaround is chairman Ryan Cohen. He is the founder of online pet store Chewy and GameStop‘s largest shareholder. He placed a couple of confidants on the board of directors and has largely built a management team with legitimate e-commerce chops.

Through the first half of the year, the company has added a chief operating officer, chief growth officer, and chief technology officer, in addition to executive hires from Amazon, Alphabet‘s Google, and Chewy. In June, GameStop hired former Amazon executive Matt Furlong as CEO.

Gamestop won’t be able to shrink its way into success. Although it has made progress controlling costs, margins are still significantly below pre-pandemic levels despite far fewer stores. New leadership, especially from notable e-commerce companies like Amazon and Chewy, can’t hurt. But those leaders are used to businesses that sell physical products. Not digital ones that can be easily downloaded over the internet. Competition is less about operational excellence and more about the easiest user experience.

That’s why I think the near-future of gaming is likely to resemble Microsoft‘s disc-free Xbox. In that world — where games are downloaded at home — there is no need for a company like GameStop. It likely realized this in 2016 when it tried to launch its own game publishing division. Now during a turnaround attempt, management is citing secrecy as a reason to hide its plans from shareholders. The last earnings call lasted less than seven minutes and no one took questions.

Anything is possible. But to me the stock price appears to be about hope and speculation rather than future cash flows. That cash flow is how stocks are traditionally valued. Of course, tradition left the building in January when the stock jumped 1,600%. That could be what I’m missing. Perhaps this time really is different, and traditional valuation is gone forever.

10 stocks we like better than GameStop
When our award-winning analyst team has a stock tip, it can pay to listen. After all, the newsletter they have run for over a decade, Fintech Zoom Stock Advisor, has tripled the market.*

They just revealed what they believe are the ten best stocks for investors to buy right now… and GameStop wasn’t one of them! That’s right — they think these 10 stocks are even better buys.