I mean, just look at the possible benefits! Blue-light filtering lenses to help protect your eyes in glasses designed to be comfortable over long periods of wear. For me, it seemed like the perfect product. My ears often get sore when wearing typical wireless earbuds, and over-ear headphones can also get uncomfortable after long sessions.

Unfortunately, in practice, the Anzu didn’t quite offer that solution for me. In fact, the glasses ended up causing all the same problems I have with earbuds and headphones (and even made some worse).

In a word, the Anzu were disappointing.

Audio is a double-edge sword

Razer talked up the Anzu’s audio in a big way, and while I didn’t expect the glasses to impress me, the sound wasn’t nearly as good as I had hoped. I found the Anzu’s audio was hollow and flat compared to the deeper sound I get from earbuds or headphones.

The problems with the Anzu’s audio come down to design. With most wireless earbuds, the tiny speakers can put out decent audio thanks to their position right at the entrance to your ear and because the buds seal your ear canal. The Razer Anzu offer the same tiny speaker, but they’re on the arms of the glasses, which means there’s no seal.

“The other significant drawback to this design is that you can hear everything going on around you.”

The upside to this design is that you don’t get any ear discomfort when you wear them for a long time. If you find in-ear buds get uncomfortable after long use, the Anzu’s design makes a lot of sense. Practically, however, it means the sound out of the speakers just isn’t as good. I suspect that if you took the same speakers and put them in a traditional earbud, they’d sound great. 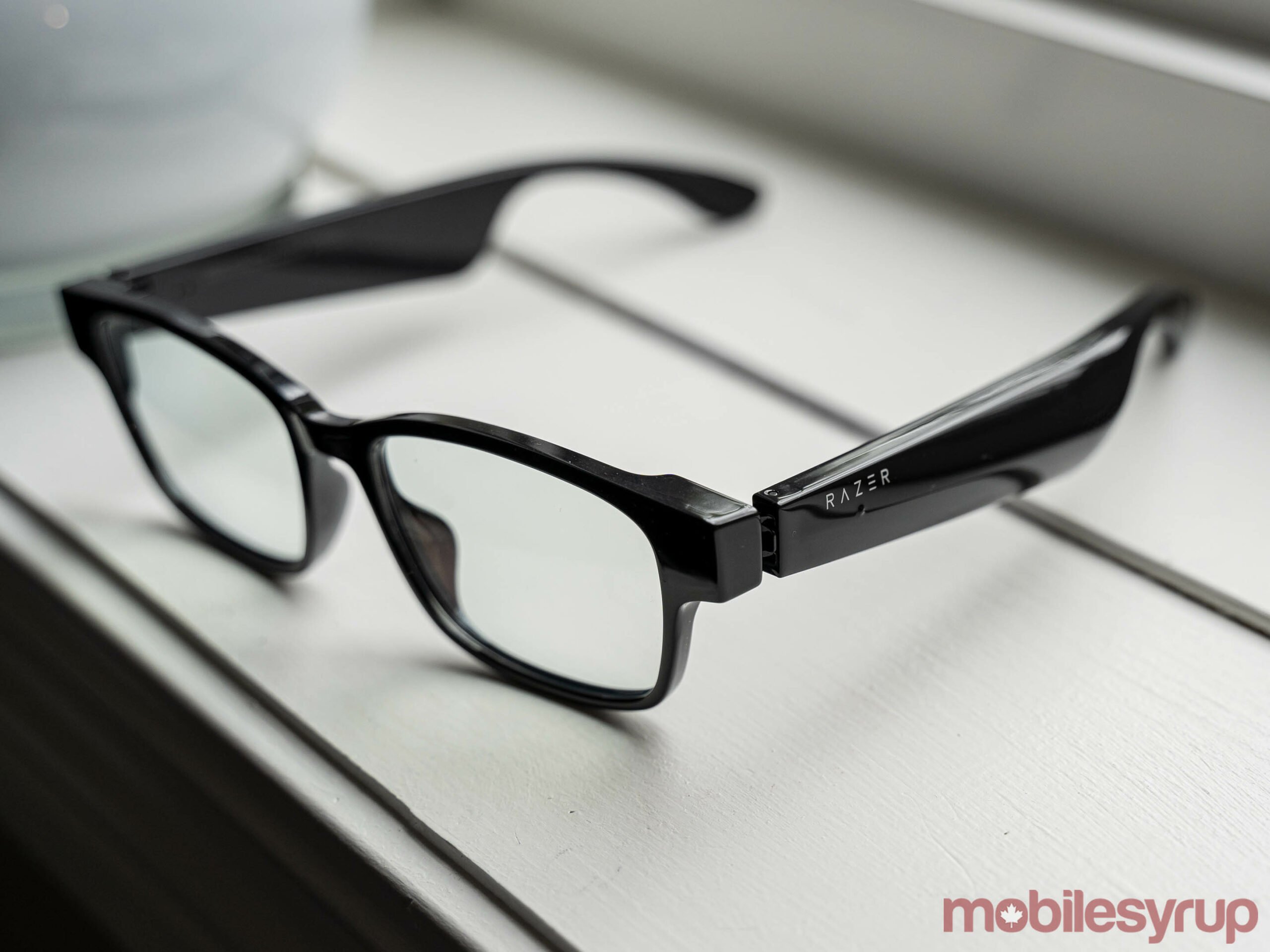 The other significant drawback to this design is that you can hear everything going on around you. In some scenarios, I found that to be quite helpful. However, most of the time I missed the sound reduction you get from in-ear buds or headphones. And I’m not talking about active noise cancellation (ANC) here — the Anzu don’t offer ANC and, based on how the tech works, I don’t see how the Anzu could. But earbuds and headphones do naturally reduce external sound by covering your ear, and that effect is more significant than you think.

That lack of sound deadening made the Anzu practically useless to me. In part, it’s because I share an office with my wife, and while it was nice to be able to talk to her while listening to music, if she hopped into a video meeting I couldn’t tune her out with the Anzu like I do with noise-cancelling headphones. Likewise, I could clearly hear both of us typing on our keyboards (although my mechanical board is so loud I think my neighbours can hear it).

Surprisingly, despite the open ear design of the Anzu, they did a pretty great job minimizing audio leak. Unless I really cranked the volume of music, my wife said she couldn’t hear any sound coming from the Anzu even though she sits a few feet away from me.

Ultimately, as long as you don’t crank the volume too much, you shouldn’t have to worry about the microphone’s picking up the speaker output, although it’s unfortunately another flaw of the Anzu’s open-ear audio design.

As a glasses wearer, I thought the Anzu would be more comfortable 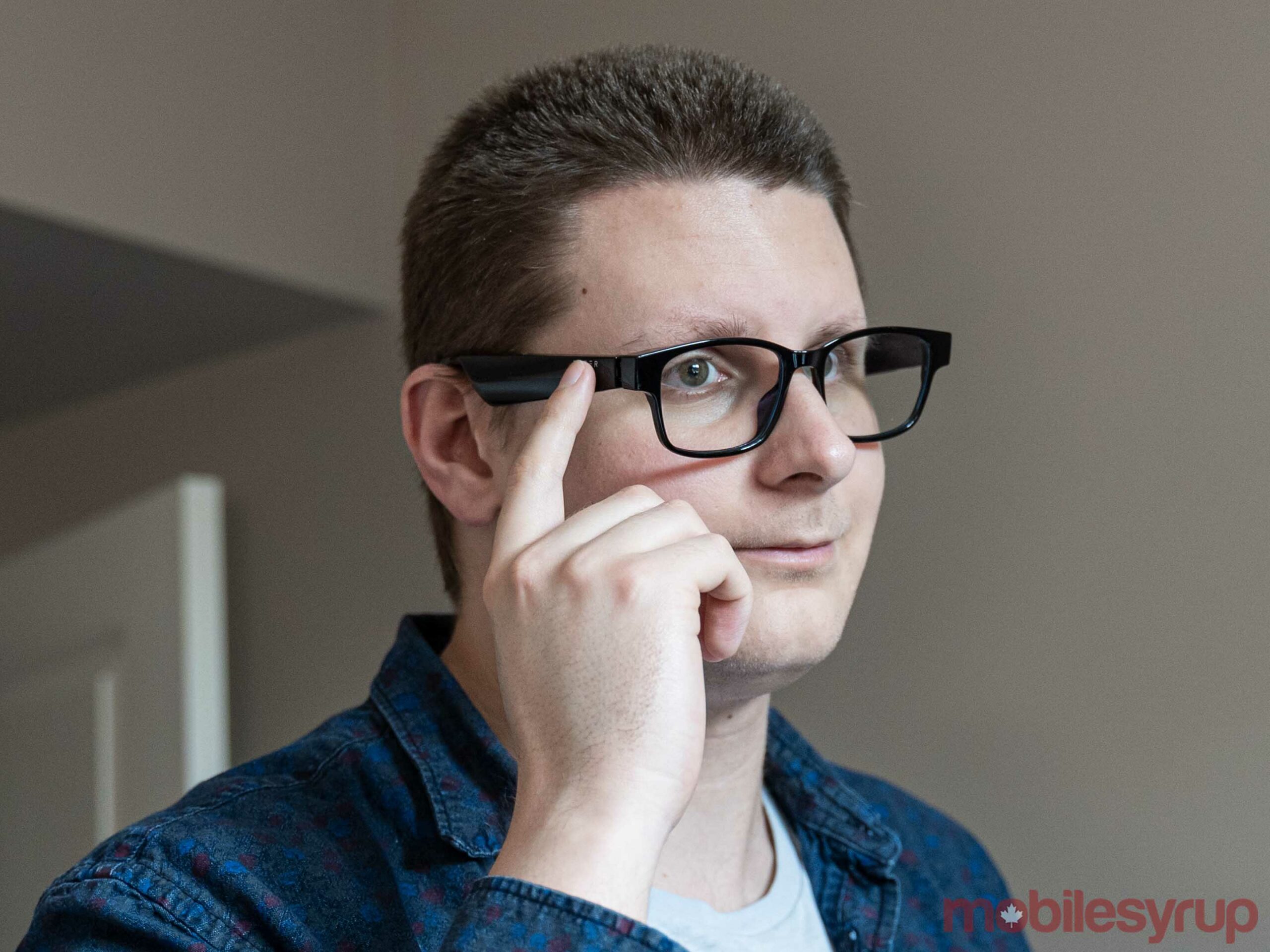 Another disappointment with the Anzu was that the glasses didn’t really help reduce discomfort. Sure, they didn’t hurt my ear in the same way that earbuds do, but after a couple hours, the arms caused significant discomfort where they rest on my ears.

I was pretty surprised by that considering I wear glasses all the time. The Anzu weren’t significantly heavier than my eye glasses, but the arms are quite a bit thicker — I suspect that’s what was behind my discomfort.

It’s worth noting here that the Anzu come in multiple shapes and sizes. There are round and rectangle frames in small and large sizes. The review unit Razer provided were the small size with rectangular lenses, and they fit great — I’m not sure a different size would have reduced my discomfort. 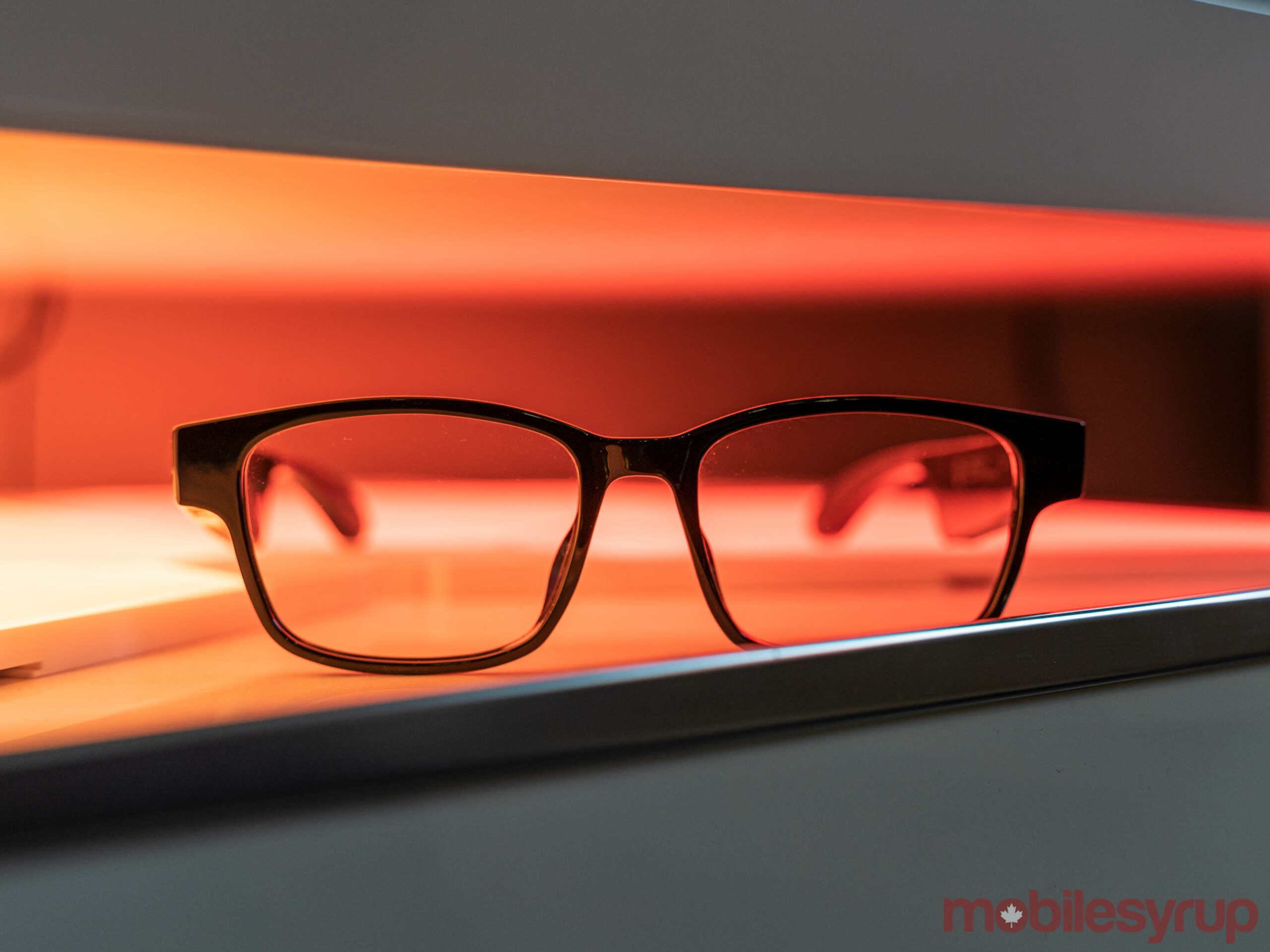 I get the odd headache at the end of a workday, likely because I spend most of my day sitting in front of a computer screen. I had hoped that blue light filtering lenses would help that, but in my experience, the Anzu lenses just made things worse.

Headaches seemed to come on quicker and more frequently when wearing the Anzu glasses, which was both a surprise and disappointment. I’m not entirely sure why that was the case, but I suspect it may have something to do with a subtle distortion effect caused by the Anzu lenses.

As an aside, I usually don’t wear my glasses while sitting at my desk. This is because they’re for distance and I just don’t need them while using my computer and also because wearing over-ear headphones with glasses can be uncomfortable. 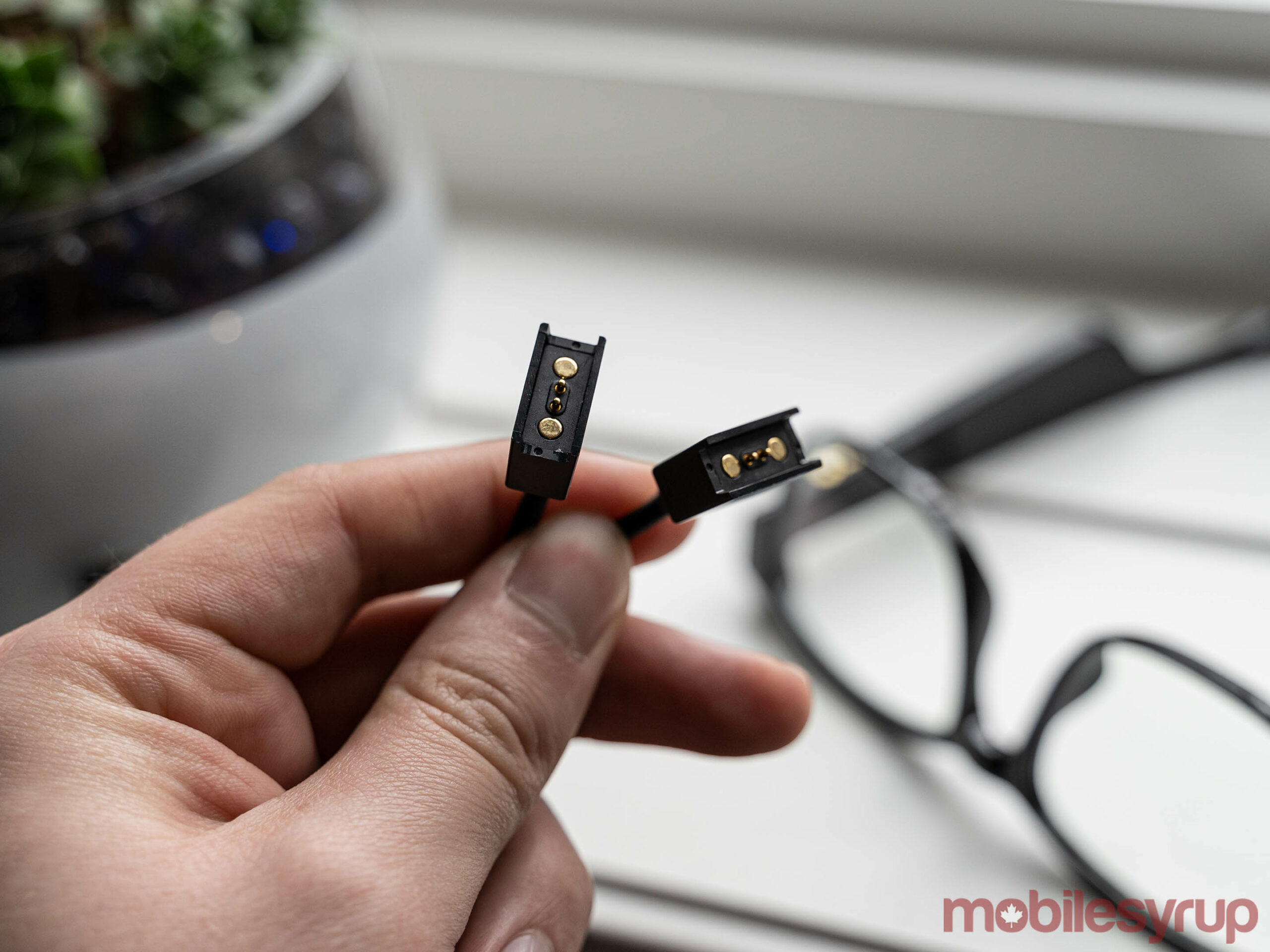 Headaches aside, I really didn’t notice a benefit from the blue light filtering glasses. Maybe others will, but my eyes didn’t feel any better at the end of the day. One upside to the filtering lenses is they don’t significantly impact the colours coming from your screen. I found it made displays I looked at a tinge yellower, but not enough to make a significant difference, which was nice since I often edited photos while wearing them.

It’s also worth noting that for those who do need corrective lenses, the Anzu lenses can be replaced. Razer partnered with Lensabl and offers a 15 percent discount for Anzu customers looking to get corrective lenses to use in the smart glasses. I personally didn’t try the service — as mentioned before, I need lenses for distance and don’t need my glasses while using my computer. Plus, I’m due for an eye checkup, so I didn’t want to fork out the money to get new lenses for a prescription that may be outdated.

The Anzu are just plain weird 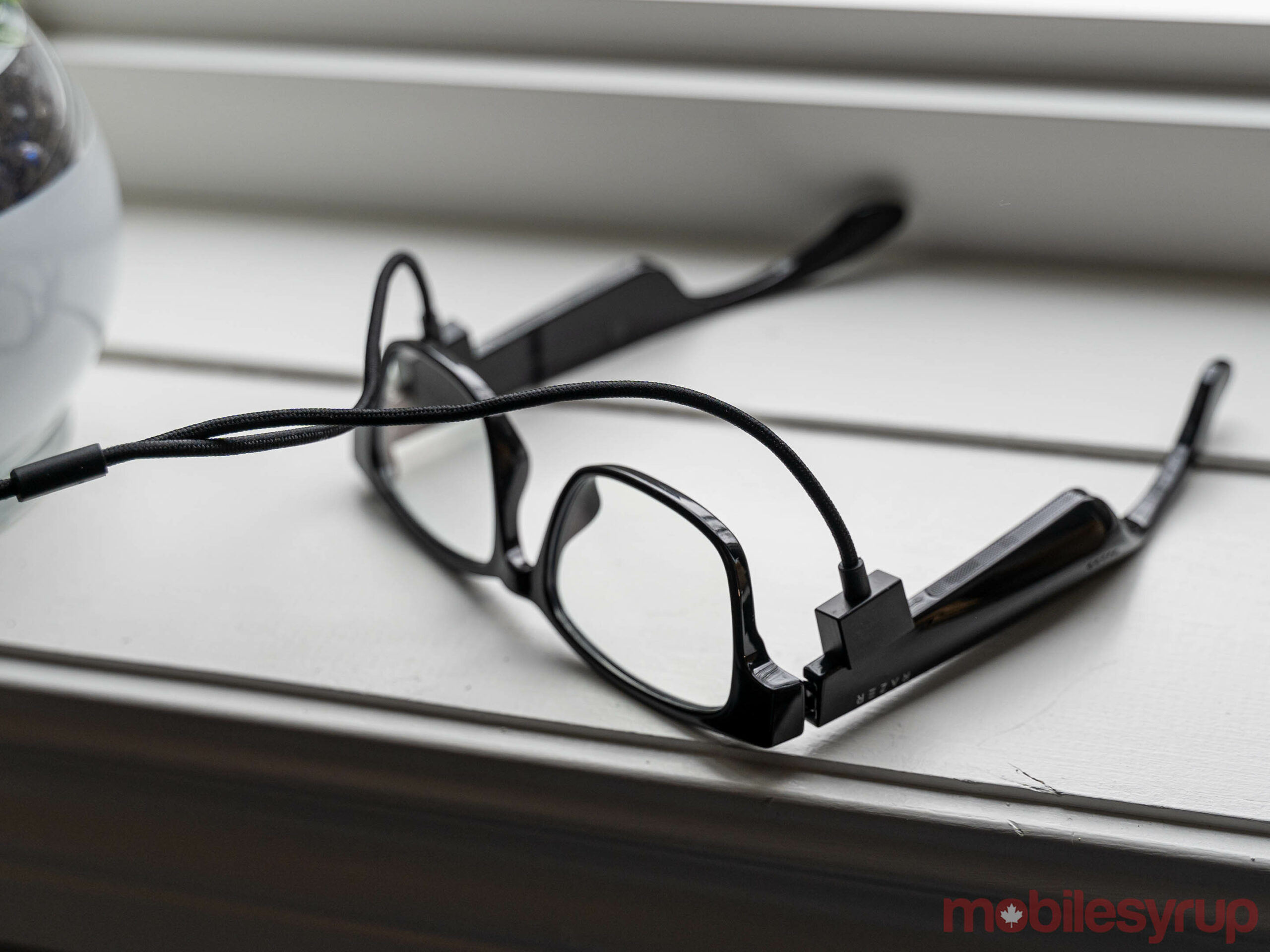 All these issues aside, there are some other aspects of the smart glasses that seem pretty odd.

For example, the charging cable attaches magnetically to the Anzu — that’s fine. But the cable’s split in two and there’s a magnetic end for each arm of the glasses. The arms of the glasses are effectively wireless earbuds, complete with separate batteries, speakers and microphones. In practice, I found it made charging the Anzu a bit annoying, but it wasn’t that bad.

Another oddity: Anzu’s touch controls. They’re there, and they work alright, but for some reason the Anzu app really struggles to interpret them. When you first connect the Anzu glasses to your smartphone, the companion app offers a tutorial on the touch controls, which you can activate by tapping on the outside of the arms (there’s a little bump on the glasses to tell you where to touch).

“Part-way through testing Razer canned its ‘Anzu’ companion app in favour of its Razer Audio app.”

The tutorial page encourages you to tap the glasses a few times to figure out what happens. It’s a neat way to teach users how to control things by tapping on the glasses, but the app refused to acknowledge any input except for the triple tap. I have no idea why, but it just would not accept any single- or double-tap input. Outside the tutorial, the touch controls worked, albeit unreliably. Often, the glasses weren’t responsive, or would misinterpret my gestures.

Along with teaching you the gestures, the app also lets you change the EQ preset. There are three settings: Default, Enhanced Clarity and Treble Boost. I found the other options sounded worse than the Default. You can also enter a ‘low-latency mode’ for gaming — again, I didn’t notice any benefit with this turned on. 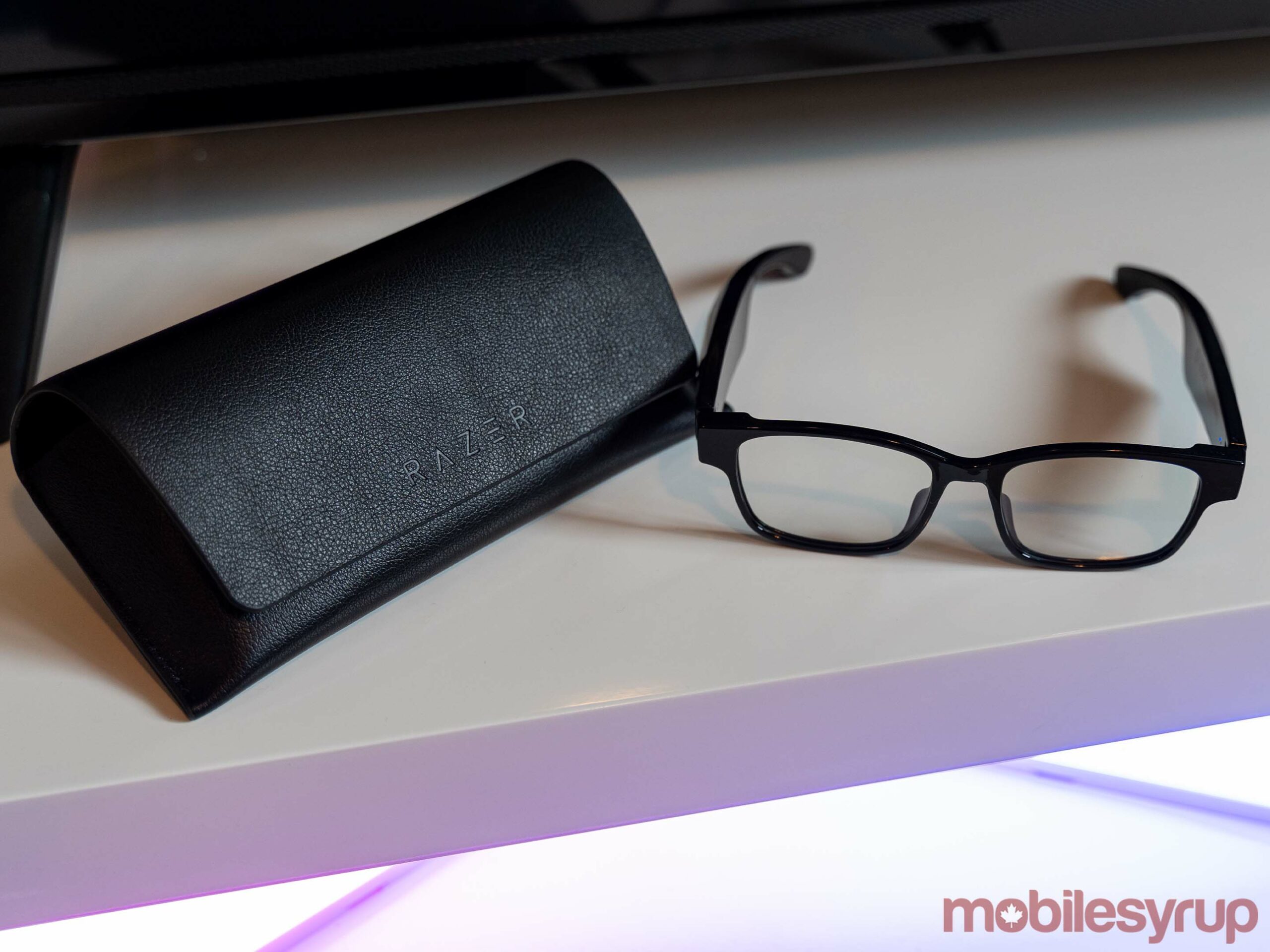 One other strange thing I noticed when using the Anzu was that connecting them was plain weird. When pairing with my phone, the Anzu created three different devices — there was a ‘Anzu Smart Glasses’ option and two ‘Razer Stereo’ options. I had to tap the smart glasses option to connect, but then my phone listed the Razer Stereo options as the connected devices.

It’s likely an oddity caused by each arm of the glasses acting as its own Bluetooth device, but it’s worth keeping in mind when setting up the Anzu. Worse, part-way through testing Razer canned its ‘Anzu’ companion app in favour of its Razer Audio app. While the in-app experience doesn’t change much, the Anzu stopped working with my iPhone after making the switch, even after re-pairing the glasses.

Finally, it’s worth mentioning that the Anzu come with a nice carrying case, which includes space for the charging cable. However, I found my review unit’s case had an incredibly strong chemical smell to it, which could be problematic for those with a sensitive nose.