When playing games on PC, deciding which input method to use can be tough. Do you play with mouse and keyboard for finer aiming and the greater versatility of 100+ keys? Or do you choose a controller for the smooth movement of its sticks and the granular fidelity of its triggers?

What if you could enjoy both? That’s the pitch behind the Razer Huntsman V2 Analog, an optical gaming keyboard with analogue switches that can detect the amount of pressure applied on each keypress. By translating that pressure into joystick or trigger inputs on a gamepad, the Huntsman V2 Analog promises a higher degree of movement control in games without sacrificing the advantages of a mouse and keyboard setup. The best of both worlds, essentially.

When everything works, analogue switches truly deliver on this promise. Unfortunately, compatibility issues on the software side hamstring what might otherwise have been a revolution in keyboard control, preventing the Huntsman V2 Analog from achieving its full potential. It’s still an excellent keyboard, but as you’ll find out below, its standout feature suffers too many compromises to make it a must-buy.


The Razer Huntsman V2 Analog is one hefty keyboard. It’s imposingly thick and heavy, weighing in at 1.24kg and measuring 45mm from the bottom of its base to the tops of its tallest keycaps. That weight gives it a reassuringly sturdy feel, though it does make it tougher to travel with than smaller, lighter boards.

With such a thick base, using the included magnetic wrist rest for support is a must. Fortunately, the leatherette surface feels fantastic. It’s soft and comfortable while still being firm enough to keep your wrists straight and stable. The rest itself is robust and doesn’t wobble under pressure, its magnetic connection keeping it from slipping away from the keyboard even when wildly flinging my hands around during moments of intense action.

Rather than regular ABS plastic, Razer has gone for doubleshot PBT for the keycaps on the Hunstman V2 Analog. These feel hardier than your average keycap and reinforce the overall premium feel of the board. Each keycap sports a textured coating, adding a roughness that not only feels nice but provides additional grip to prevent your fingers from slipping.

Not one but two thick braided USB cables extend out of the Huntsman V2 Analog. You only need to plug in one cable to use the board, but you’ll need to connect both if you want to use the USB passthrough port on the side of the board. The primary cable is USB Type-C, but an adapter to USB 3.0 is included with the board for folks who don’t have a Type-C port on their PC.

Rounding out the package are a handful of dedicated media keys sitting above the numpad on the right side of the keyboard. Along with buttons for controlling audio and video playback, there’s a multi-function dial that defaults to controlling system volume. The Huntsman V2 Analog also continues the recent Razer trend of moving the keyboard status lights above the arrow keys, making it easier to see whether you’ve enabled Game Mode, Caps Lock or other toggles without craning your neck. 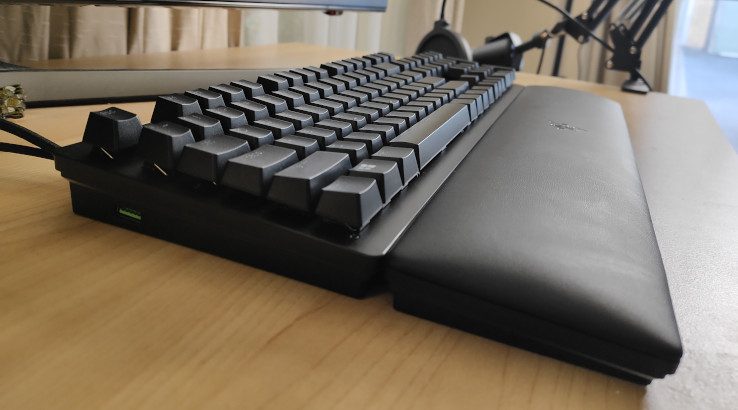 The Razer Huntsman V2 Analog delivers fast and snappy performance, and it’s all thanks to the excellent optical switches sitting beneath each key. Unlike mechanical switches, these optical switches use light to detect actuation, minimising the latency between keypresses and the resulting on-screen action even further. I could feel the increased speed when playing games like DOOM Eternal and Destiny 2, bestowing a small but meaningful edge over typical mechanical keyboard sensitivity.

What really sets the Huntsman V2 Analog apart, though, is right there in the name. Its switches are able to detect analogue input rather than the simple binary on/off state registered by normal switches. This allows each switch to track the amount of pressure you’re applying to it.

On its own, this doesn’t achieve anything since PC games aren’t built to accept analogue keyboard input. With the Razer Synapse app, however, you can map the varying pressure levels to analogue input components on a gamepad like the joysticks or triggers. By mapping WASD to the left joystick, for instance, you can more finely control the movement speed of your character, lightly pressing the keys to creep forward instead of having to alternate between no movement and full-speed on a regular keyboard.

In a game like Assassin’s Creed Valhalla, this lets you sneak more fluidly around the world, tiptoeing around enemy vision cones and avoiding the herky-jerky lunges inevitable when playing with binary movement input. In Grounded, tightrope-walking on thin cables and leaping between narrow stalks of grass is significantly easier with the ability to incrementally adjust your movement speed and direction.

Similarly, you can map keys to the rear triggers of a gamepad to defy the conventional wisdom that keyboards are no good for racing games. Taking to the track in Assetto Corsa, Descenders and Dirt 5, the increased control afforded by analogue acceleration and steering made for a vastly improved experience over regular keyboard play. While it’s still not as precise or intuitive as a gamepad, it’s a legitimately viable option for folks who either don’t have or don’t want to race with a controller.

Viable, but not ideal. As impressive as they are, analogue switches don’t offer the same degree of control as a proper joystick or trigger. The throw on each switch is much lower than the equivalent range of movement on a joystick or trigger, and it’s much harder to apply precise downward pressure on a key than it is to nudge a stick or feather a trigger. It’s a decent approximation, but it’s still that: an approximation.

The bigger issue, though, is compatibility. While Razer claims that analogue input will work with any game that supports a gamepad, it’s not quite that simple. Yes, the Huntmsan V2 Analog can act as both a controller and a regular keyboard (many games will detect it as both), issues arise when you want to use both input methods at the same time. Say, looking around with the mouse while nudging your character forward with joystick-mapped analogue input.

For this to work, a game has to support hybrid input methods, registering and processing commands from both mouse and keyboard along with controller at the same time. Games like Assassin’s Creed Valhalla, DOOM Eternal, Grounded and Gears 5 handle this relatively smoothly. There are a few quirks, such as gamepad aim assist impacting mouse movement and on-screen prompts flashing between controller and keyboard buttons, but nothing that can’t be worked around or overlooked.

Those games are the outliers, though. Titles like Control, Destiny 2, Halo 3, Gunfire Reborn, Sunset Overdrive and more refused to play nice with the hybrid control scheme, either ignoring simultaneous inputs or simply refusing to detect gamepad or keyboard input completely. Since these issues stem from the way a game is built, I’m not sure there’s a lot Razer can do aside from encouraging developers to support hybrid input in their future games. Having such inconsistent compatibility really hurts the Huntsman V2 Analog, undermining the very feature that sets it apart from the competition. 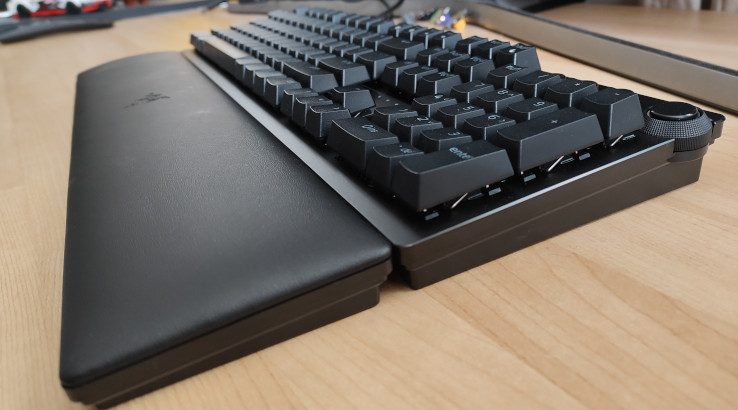 Analogue input isn’t the only trick the Huntsman V2 Analog has up its sleeve. Because its switches can detect variable amounts of pressure, you can adjust their actuation points within the Razer Synapse desktop app, tweaking how far down you need to push each key before it registers your keypress. You can set the actuation distance as low as 1.5mm for a faster response or as high as 3.6mm – or anywhere in between. Each switch can be tweaked separately, too, in case you want certain keys to respond faster than others.

Along with customisable actuation, the Huntsman V2 Analog’s switches support a dual-step actuation feature that lets you perform two separate actions with a single keypress. To do this, you define two actuation points within the 1.5mm to 3.6mm range and assign a function to each. When the switch hits the first actuation point, it fires off the assigned function. If you keep pushing the key down to its second actuation point, that second function will trigger too.

This feature is most useful for performing related actions where the timing of the second action can change at a moment’s notice. For instance, I bound the functions for equipping and throwing grenades in Gears 5 to a single key which allowed me to quickly confirm or cancel my throw by fully pushing or releasing the same key. It might only save a few milliseconds compared to hitting two separate buttons, but for competitive gamers, those milliseconds matter.

It’s worth noting that dual-actuation only supports keyboard commands, not mouse buttons, gamepad controls, macros or any other functions. It also requires the Razer Synapse app to be running, so you can’t store the mappings to the keyboard’s internal memory and transfer it from computer to computer as you can other mappings. You can’t use dual-step actuation or customisable actuation in conjunction with analogue input, either, as they all leverage the analogue sensitivity in different, incompatible ways.

Beyond its unique analogue capabilities, the Huntsman V2 Analog packs plenty of other features more common to premium keyboards. You’ve got full key rebinding, of course, and the Razer Synapse interface remains the gold standard for both depth and ease of use. There’s Razer Hypershift support for defining a second set of key bindings accessible while holding down the designated Hypershift button, plus a new option for mapping keys to gamepad and joystick inputs. The process is just as simple as assigning any other key or function.

All the features you’d expect from a premium gaming keyboard are present and accounted for. Macro recording, N-key rollover, anti-ghosting, game mode, plus a new Turbo mode that triggers a command multiple times per actuation. You can set the frequency of repeated inputs to match your desired cadence.

On the hardware side, the Huntsman V2 Analog supports USB 3.0 passthrough via a port on the left side of its base, which is always a handy addition. You’ve got a multi-function dial and dedicated media keys on the top right of the board, each of which you can remap to other functions through Razer Synapse. Last but not least, Razer’s Chroma RGB is in full effect with customisable per-key lighting as well as RGB underglow on the magnetic wrist rest.

Should you buy the Razer Huntsman V2 Analog?

The Razer Huntsman V2 Analog is an excellent gaming keyboard with a unique spin that doesn’t completely live up to its promise. Analogue input is a great addition, offering more control and versatility than a regular keyboard even if it’s not as precise as a gamepad. Unfortunately, inconsistent compatibility prevents it from being the revolution in keyboard input it could have been. Maybe with time and refinement Razer will be able to address these issues, but for now they make analogue switches more of a novelty than a harbinger of a new generation in keyboard design.

Nintendo News – Skul: The Hero Slayer Is Getting A Switch Release This Summer