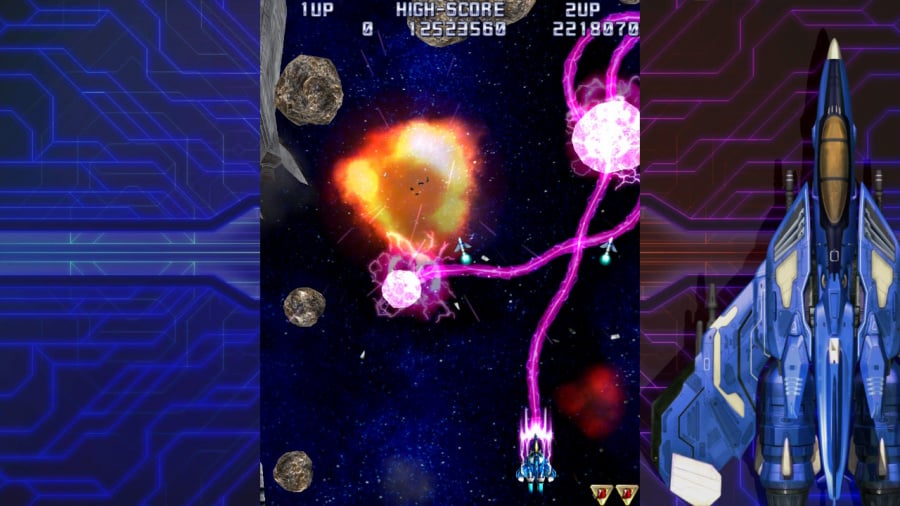 Back in the late eighties when 2D shooting games were a dominant form rather than a somewhat niche genre, a particular kind of shmup became very popular indeed. While the likes of Capcom’s 1942 certainly set the groundwork, the success of Toaplan’s separate 1987 arcade releases Twin Cobra and Flying Shark made hard-nosed, unembellished military shooting games very popular indeed. In the following two years came the likes of Twin Eagle, Meta Fox, Fighting Hawk, and Toaplan’s own Fire Shark and Twin Hawk.

By 1990, a Tokyo-based studio named Seibu Kaihatsu put a well-needed spin on what had become something of a shooting game trope. Rather than adding another straight-down-the-middle military shooter to the pile – and resisting any titular references to hawks, eagles, sharks or twins – the studio seasoned Toaplan’s recipe with sci-fi. Raiden had arrived, and while set in a distant future, it inherited much of the DNA from Twin Cobra and its ilk. It was mechanically straightforward, had a knack for encouraging dramatic play styles, and carried a hard-boiled tone that was captivating and intimidating in equal measure. Over thirty years on, Raiden is still with us, and a few spin-off games aside, it has never lost that play feel. Which brings us to Raiden IV x Mikado Remix, the latest release in the series. 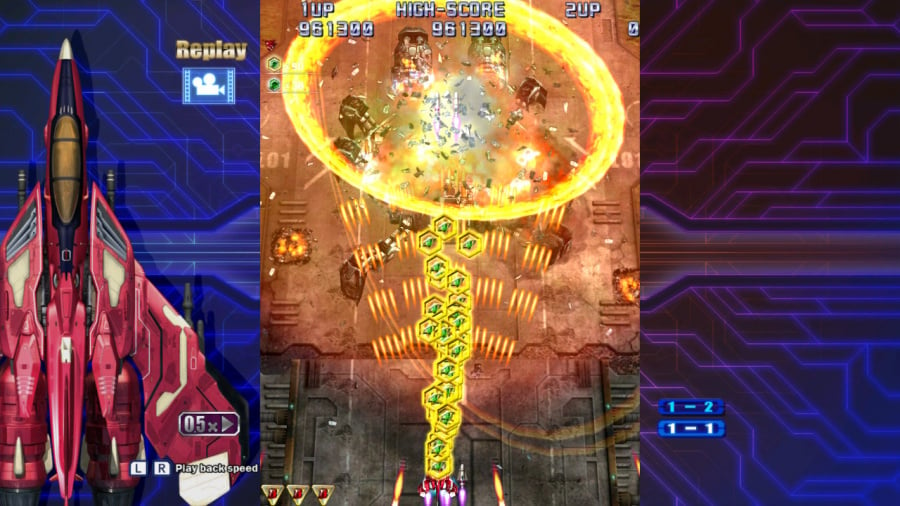 Before tucking into the detail, if the title sounds familiar, this is hardly the first time Raiden IV has been released. The 2007 arcade original was quickly followed up by a very respectful Xbox 360 port the following year. Then, in 2014, came Raiden IV Overkill, initially for PS3 and soon thereafter PC, introducing a new scoring model that significantly shifted the flow and feel of Raiden IV – namely the Overkill system.

And so here we are with yet another Raiden IV release. Fortunately, Raiden IV x Mikado Remix offers the most definitive version of Raiden IV yet seen, compiling a generous suite of modes and arrangements, along with a wealth of new background music by some highly respected names from arcade culture. Created as a collaboration with the esteemed Japanese arcade Game Center Mikado, Raiden IV x Mikado Remix features artists including the Go Sato Band, Heavy Metal Raiden, Daisuke Matsumoto (Cave), and Hirokazu Koshio/COSIO.

Beyond the wealth of musical options you can choose between, you get a port of Raiden’s original arcade version, the ‘Additional’ mode that adds two new levels to arcade mode, Overkill Mode, a Score Attack arrangement that makes every available stage available to play individually, an unlockable Boss Rush setting for sparring with end-of-stage titans, a decent-sized gallery, and a simple replay function for recording your runs. 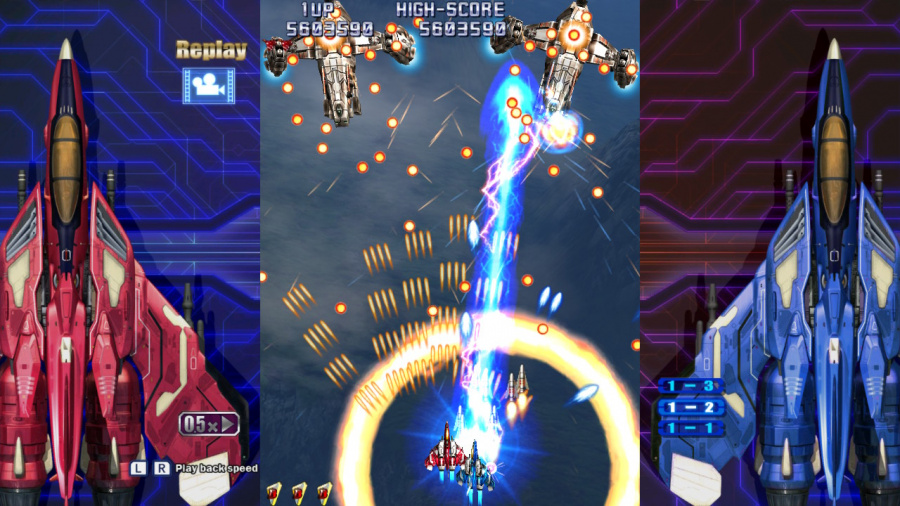 First and foremost, the Mikado Remix delivers a very decent port of Raiden IV’s various versions on Switch. It’s a delight to play on the go in portable mode – ideally with a Flip Grip, as full ‘Tate’ is supported. Dock your switch and plug in a stick, and you get a fantastic full-screen experience. Across the package, Raiden IV plays authentically and sounds sublime. The visuals are getting on a little from a technical standpoint and always went with an aesthetic that put 3D models before crisp pixel art. But the look here matches the tone, and important things like bullet clarity are never a problem. More importantly, Raiden IV is a tremendous shooter, and one of the most palpably exciting contributions to its genre.

In fact, while Raiden IV is beloved and well played, it’s not quite an icon of its form. But that, perhaps, is because it isn’t quite like the games that have come to define perceptions of the genre – those bullet hell masterworks like DoDonPachi, Ikaruga and Mushihimesama. Raiden IV doesn’t ask you to thread a minuscule hitbox through dense clouds of hundreds of bullets; nor does it lean into elaborate scoring systems as seen with the likes of Katsui, Battle Garegga or Deathsmiles. With Raiden IV you have a shoot button, a bomb button, movement on the stick, and that’s it. Across the range of included modes, various scoring systems exist to add depth, but they are simple and intuitive throughout. 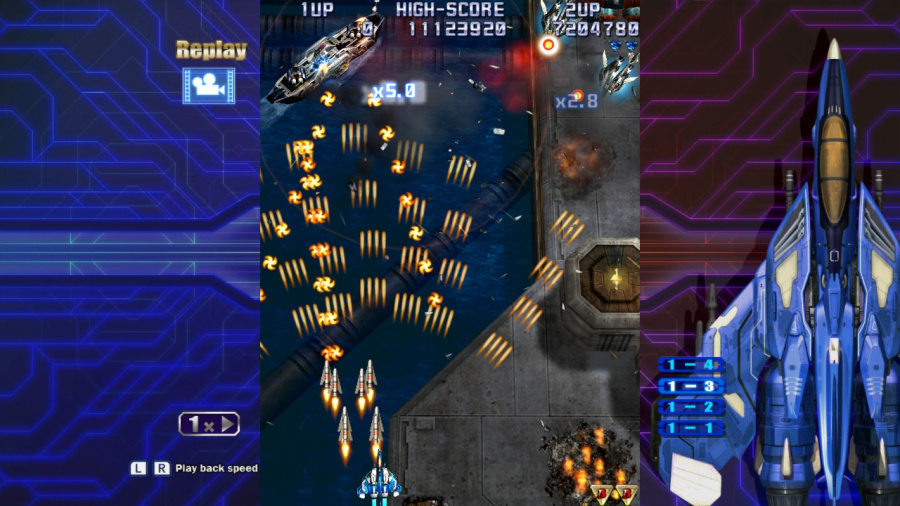 Arcade mode still might be the standout, thanks to the risk-reward inducing purity of its Flash Shot system. Down enemies fast, and you get a multiplayer on their base score. That’s all there is to it – although you can add a few more points by grazing your ship close to bullets. The beauty of the Flash Shot system is that encourages you to play high-up the screen, point blanking enemies as soon as they emerge. That means big risks, which – combined with aimed bullet patterns that keep you on your toes – makes for consistently energetic, intense gameplay, where changes of fortune and dramatic shifts in pace define the experience. If you want to be toyed with by a game like a cat might play with a recently captured mouse, Raiden IV’s arcade mode has your back. It’s also a game where there is tremendous capacity for finding new ways to improve your score, meaning lasting replayability for those that are smitten.

Additional mode delivers the same thrills, albeit with shifting enemy patterns and types, and the two new stages, lending some variety for those that might be extremely familiar with the Arcade arrangement. Overkill dumps Flash Shot in place of its own system, which sees larger flying enemies linger in the sky after their destruction, letting you pound additional firepower into them to generate bonus score items. Again, it’s a purebred risk-reward system, where you have to decide between focusing your firepower on new enemies or letting them clutter the screen while you continue to unload into the remains of a down foe for points. Overkill significantly shifts the playstyle and rhythms of Raiden IV, but it remains purebred and thrilling. Score Attack, Boss Rush and the online leaderboard versions of the Arcade, OverKill and Additional mode lend more of the same. And then there’s doubleplay. 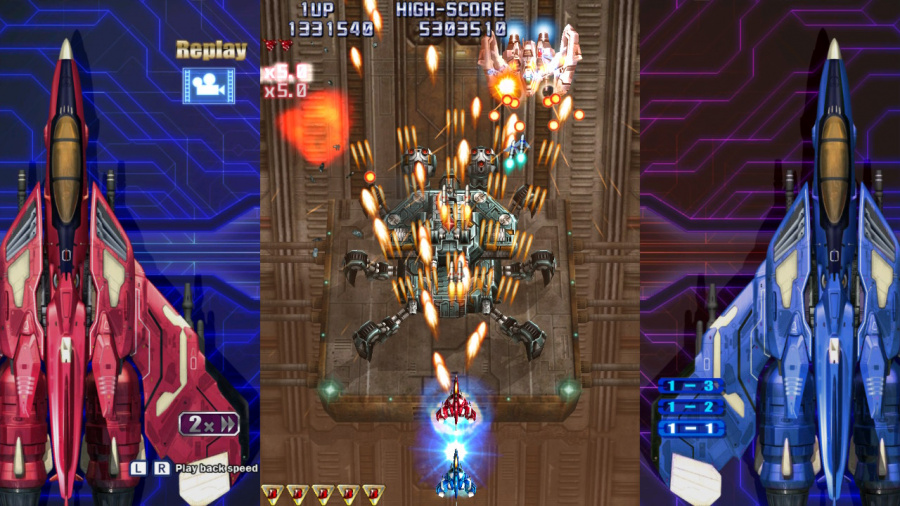 Raiden IV x Mikado Remix’s various modes feature a ‘Dual’ setting – that is, two-player mode. But ‘Double mode’ asks you to pilot both ships single-handedly, with all your effort contributing to a single score. It’s a play style that is rarely specifically supported in shooting games, and it sounds so intimidating that few people ever try it. But you really should. It’s remarkable what you can achieve after a few tries, and doubleplay offers one of the most distinct, exciting experiences not just in 2D shooters, but across gaming. In fact, the way Raiden IV’s enemies so often sweep in in paired sets, there’s even a case to be made that Raiden IV is really designed for doubleplay first and foremost. And there are even new firepower types to be found in placing one ship behind the other. Alas, there is no global leaderboard for Double mode. But that is one of the few black marks in this astoundingly good Raiden IV compilation.

Yes, Raiden IV is not a typical shmup by contemporary standards, and won’t be for everyone. Equally, all of these modes have been available in some form elsewhere. But as a single package, Raiden IV x Mikado Remix offers the Switch one of its best shooting game releases yet – and that is saying something on a console that has emerged as an unexpected star vehicle for the genre.