The problems for AT&T (NYSE:T) stock started in 1999. It embarked on a hideous descending channel that hasn’t stopped yet. T stock is now 55% below its all time highs from January, 22 years ago.

It hasn’t all been downhill, as it has had great upswings along the way. But they all turned out to be scalping opportunities.

One thing these positive stints had in common was a solid base. That’s the opportunity from here and for the next six months.

There is a good chance that the sellers need a rest, and that the floor will hold. If the fans can keep it above $26 per share, they have a shot at building a base. The upside target could extend to $37 per share, but with tremendous resistance starting near $31. 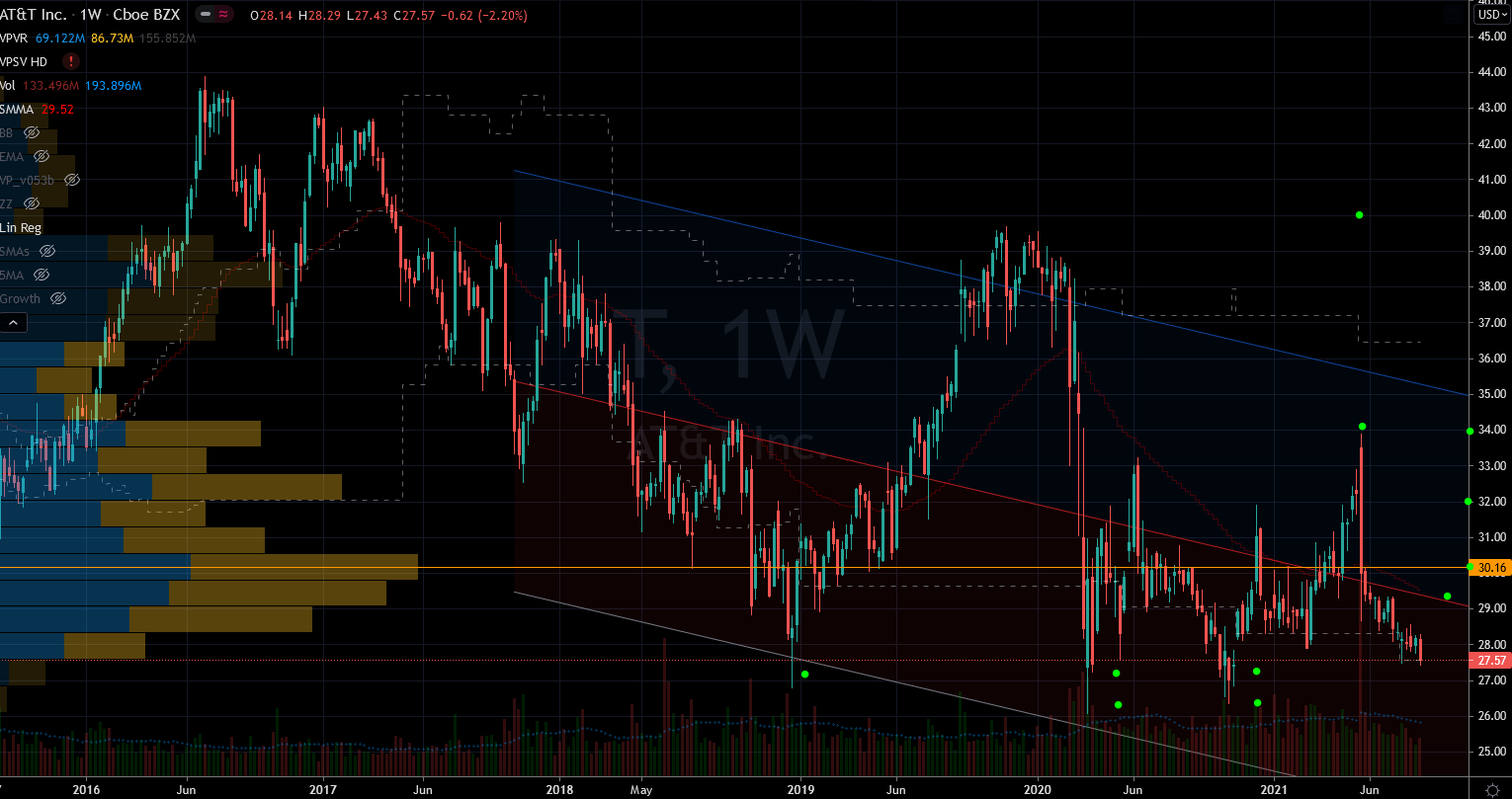 There aren’t specific catalysts in the shorter term that suggest this is imminent. Patience is key for now as the bears are in charge of the action. T has set a series of lower-lows and lower-highs. What’s worse is that they are losing $27.50, which could usher in another $2 drop from here.

Therefore, the thesis might take a few weeks to unfold – and there is no rush. This is especially true since markets will be jittery going into the Federal Reserve’s event at Jackson Hole this week.

I am not a perma-bull for this stock, so it’s an honest assessment of the situation. In fact, on June 8 I suggested avoiding T stock, and it fell 6% after that. It always a matter of risk reward for me, and I revisit it now from this lower level.

Fundamentally, the concept is still the same where management is in repair mode. It’s not that they had one giant mistake, but they need to refocus their efforts.

Management Has Work to Do

The fundamentals for AT&T are in shambles. First, the top line is stagnant while other mega-caps are growing leaps. Second, the net income went from $29.5 billion in 2017, to losing $2 billion now. Clearly there is long term risk if they don’t right this ship.

Luckily, they are still a giant, and they generate a ton of cash flows from operations. Therefore, they can feed the machine until they realign with current trends. This somewhat reminds me of the situation with General Electric (NYSE:GE). Management there lost its bearings for a while, so T can still fix things. The trick is to do it before the point of no return.

GE did it, now it’s AT&T’s Turn. All T stock needs to find buyers is strong sentiment. GE doesn’t yet have great results yet, but the message is clear. AT&T needs to streamline the talking points to woo experts back. The stock will recover much faster than the actual bottom line.

And then there is the dividend and it’s a whopper at 7% reward. This puts it in the category of Exxon (NYSE:XOM) and Chevron (NYSE:CVX) but not quite. AT&T recently cut theirs, and nothing is stopping them from doing it again. In the absence of fixed-income alternative, it is relatively substantial still.

The five-year floor is just below T stock. If they can avoid big headline flubs, then they can bounce off it one more time. Management needs to avoid the increment hiccup. In the case of Chevron and Exxon, both managements publicly supported their dividends. AT&T needs to do something similar.

The global central banks are likely to keep yields suppressed. Therefore, the dividend draw to stocks is key. Yes, we are facing the possibility of the Fed announcing the taper this fall. But they are far from raising rates.

The opportunity today is to add T stock to the portfolio. First for the fixed income but second for the potential 20% swing trade reward. There is an important caveat for dividend headline risk. I don’t get the same sense of management commitment as say with CVX or XOM.

As the facts change, investors need to flex. I’ve been consistently chasing the swings in T stock. I am for it like the opportunity now, or back in 2019. My goal is usually to first avoid easy mistakes, and then identify rally potentials. If markets hold up the this should work.

On the date of publication, Nicolas Chahine did not have (either directly or indirectly) any positions in the securities mentioned in this article. The opinions expressed in this article are those of the writer, subject to the InvestorPlace.com Publishing Guidelines.

Nicolas Chahine is the managing director of SellSpreads.com.

SNB’s Jordan may be out for weeks after urgent operation

When you start to think about how GME, a stock with 76m shares outstanding, managed to trade over a BILLION shares in one month 🤔🤨 : Superstonk