A top official at Baltimore County’s Department of Economic and Workforce Development, William “Chris” McCollum, made $29,670 in unauthorized expenditures when he headed the county’s Ag Center, according to a report released today by Inspector General Kelly Madigan.

Another $8,925 in problematic purchases were made by a lower-ranked employee who had access to county-issued procurement cards (“P-cards”).

The names of McCollum and Mary de la Reguera are redacted in the publicly issued report, and Madigan declined to comment further.

But The Brew confirmed their identities by matching the names to ID numbers and other means. Neither could be reached for comment.

Madagan’s report and spreadsheet disclose 38 P-card transactions, the vast majority made by McCollum, that “appear to violate the County’s Procurement Card Policy and Procedures.” Ten of the purchased items could not be located by investigators and are considered to be missing.

Terming her office’s findings “troubling,” Madigan wrote that if it is determined that an employee “intentionally violated [the county’s procurement policies] or took any of the unaccounted-for property for personal use, the Office would view such action as misconduct.”

The IG reports to County Executive Johnny Olszewski, who has the power to act on her office’s findings.

Olszewski’s spokesman, Sean Naron, would not say today if any disciplinary action has been, or will be, taken against the employees.

Until last month, de la Reguera worked as a $47,000-a-year assistant farm manager. Naron would not confirm if she was assigned to another department.

McCollum remains on the county payroll as a $135,000-a-year “senior administrative assistant.”

The Ag Center is located along Shawan and Cuba roads in Hunt Valley. (Ann Costantino)

A Democratic Party operative for years, McCollum was the 2018 campaign manager for Councilwoman Cathy Bevins and was treasurer of the Baltimore County Victory Slate, whose last-minute $100,000 loan to Catherine Pugh helped her win Baltimore City’s Democratic Party primary for mayor.

Smith had earlier named McCollum director of the Ag Center, a 149-acre property in Hunt Valley set up as a resource to educate the public about agriculture and to support working farms.

Under McCollum, the facility expanded rapidly, using state and county funds to build a large greenhouse, $2.5 million equine center and other facilities that sparked controversy (here and here).

In a report issued in February, Madigan said a “Produce for the People” program championed by McCollum wasted more than $1 million in farm equipment that mostly sat idle.

The program, initiated by former County Executive Kevin Kamenetz to supply wholesome food to food banks and homeless shelters, wound up producing less than 48,000 pounds of crops – far less than the 500,000-600,000 pounds of sweet corn, beans and other produce that McCollum claimed would be available.

In 2019, Olszewski named McCollum director of anchor initiatives, and last August he was made acting director of the County Department of Economic and Workforce Development.

He remains in that department in a position whose title and duties were not disclosed today by Naron. McCollum did not return a phone message and an email request for comment. 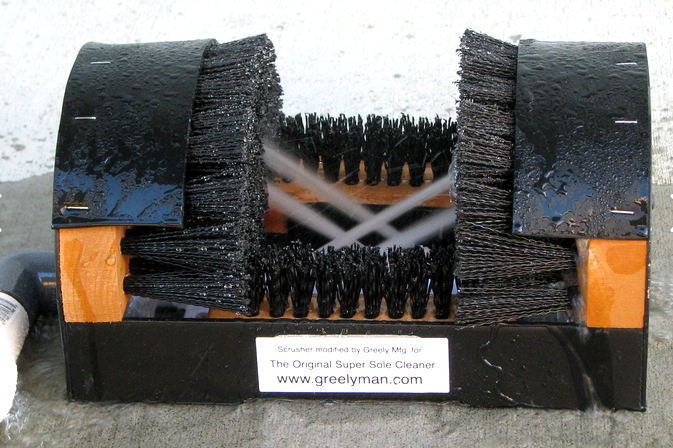 According to today’s report, McCullom violated county policies despite taking a mandatory three-hour course that covered the “do’s” and “don’ts” of P-card usage and had signed the form “Delegation of Authority for Procurement Card Purchases” upon receiving his cards.

He repeatedly “split” larger purchases into smaller segments in order to circumvent the $1,000 individual limit placed on the cards, the report said.

For example, an Ariens Platinum Series Snow Blower, costing $1,799, was purchased through two transactions of $899 and $900, each using a different card.

“The purchases occurred within one minute of each other,” the report noted.

Multiple trips to Home Depot, REI and other outlets for boots and knives and snow blowers on the taxpayer’s dime.

McCollum made multiple trips to nearby outlets to make what the report calls “personal purchases” on the taxpayer’s dime.

He purchased $395 worth of knives at REI, racked up $2,398 for Toro snow blowers at a Halethorpe equipment company, and ordered a $638 boot sole cleaner advertised as “the best boot cleaner in the world, guaranteed!”

The boot cleaner was “last seen outside of a side entrance to one of the Ag Center’s buildings” and is now missing, the report noted.

De la Reguera made far fewer problematic purchases with the three p-cards issued to her, according to Madigan.

They included buying three brushless string trimmers at Home Depot for $537 and installing $3,910 worth of fence posts and rails.

Responding to the report, County Administrator Stacy I. Rodgers thanked Madigan for bringing “your report to our attention” and pledged that P-card holders in the Department of Recreation and Parks will be retrained on spending limits and appropriate purchasing practices.

Regarding the items missing from the Ag Center, Rodgers said she hoped that a comprehensive asset inventory project will be completed by September 1, 2021, enabling the county to “effectively track department property at the Agriculture Center.”

• Ann Costantino assisted with this story.

The Home Depot – Lowe’s Gains Another Fan Ahead of Earnings. Here’s What to Expect.

The Home Depot – Will New Jerseyans have chlorine for their pools this summer?

The Home Depot – Home Depot takes up to 48% on DEWALT combo kits, tools, and accessories from $20