Katsuji Nakazawa is a Tokyo-based senior staff writer and editorial writer at Nikkei. He spent seven years in China as a correspondent and later as China bureau chief. He is the 2014 recipient of the Vaughn-Ueda International Journalist prize for international reporting.

“Why was the Chinese embassy in Yugoslavia attacked by U.S. precision-guided bombs in 1999?” reads the headline of one.

The U.S. has always maintained that the bombing 22 years ago was an accident and that the NATO operation intended to bomb a nearby Yugoslav facility.

But what really happened that night has been a captivating topic for Chinese citizens. That such information is coming out now is a strange phenomenon, almost as if somebody is intentionally trying to reveal the secrets behind the incident.

Protesters in Beijing come out en masse to vent their anger at the U.S. for bombing the Chinese embassy in Yugoslavia in May 1999.

In May 1999, the Chinese embassy was attacked by five precision-guided bombs launched from B-2 stealth bombers. Three Chinese nationals were killed and more than 20 injured. The incident sparked massive anti-U.S. protests in Beijing.

Despite an apology from then-President Bill Clinton, the Chinese government has always held that it could not have been a misfire and that the U.S. military deliberately bombed the Chinese embassy. Still, the Chinese side has never presented any evidence to back that it was a planned U.S. attack.

The articles that recently surfaced dig right into the issue. The real reason the Chinese embassy was targeted was the existence of the wreckage of a U.S. stealth fighter in the embassy, the articles hint.

Just over a month before the embassy bombing, a U.S. F-117 Nighthawk stealth fighter sent over the Kosovo conflict was shot down by a Russian-made surface-to-air missile fired by the Serbia-led Yugoslavian military.

The wreckage was strewed over farmland, and some parts were later displayed at Belgrade’s air museum. But Chinese agents also crisscrossed the area, buying up parts of the plane from local farmers, Adm. Davor Domazet-Loso, then military chief of staff in neighboring Croatia, told The Associated Press in 2011. Serb firefighters walk through what was the Chinese Embassy in Belgrade after it was hit by NATO missiles on May 8, 1999.

With research having started in the 1970s, the F-117 technology was by the time of the crash no longer tip of the spear. But the wreckage was still valuable as research material and the focus of rival countries’ attention.

“We believe the Chinese used those materials to gain an insight into secret stealth technologies,” Croatia’s Domazet-Loso was quoted by AP as saying in an interview, “and to reverse-engineer them.”

According to the recent Chinese articles, China asked the Yugoslavian government to share the remains of the recovered wreckage, and after consultations, succeeded in obtaining the guidance system, the stealthy main body and heat-resistant engine-nozzle parts.

Bound in secrecy, it was difficult for the Chinese to transport the treasures by sea or by air. As a result, China was left with no choice but to temporarily store them in the basement of the Chinese embassy, the articles say.

The U.S. military detected positioning signals coming from the wreckage and became aware of its new basement home, the articles continue. Villagers check out the wreckage of a U.S. F-117 stealth fighter that was shot down on March 28, 1999, over the village of Budjanovci, Serbia, some 40 km west of Belgrade.

The B-2 bombers were sent to keep military secrets from falling into China’s hands, the articles conclude.

One of the bombs actually reached the basement but did not explode, leaving the wreckage intact, the stories go on to say.

After that, China spent 10 years upgrading its stealth technology and conducted in-depth research on laser-guided missiles. A 2011 AP story says that the technology for China’s J-20 stealth fighter may have originated from the downed F-117 aircraft.

In the two decades since the embassy bombing, China, with a chip on its shoulder, has narrowed the gap in national power with the U.S. As evidenced by the recent meeting of top Chinese and U.S. diplomats, China has no need to fear any country as long as it has real power, the articles say.

Notably, the articles do not write in definitive terms. When it comes to the core facts, they use indirect references such as “said to be” and “the most widely supported analysis circulating on the internet.”

That is likely because, if true, that the embassy was hiding sensitive material in its basement, putting the lives of embassy staff at risk, bodes ill for China’s image.

Back in 2011, China’s hawkish Global Times had denied the tech-theft theory.

As such, it is difficult to determine which parts of the articles are true and which are speculative. It is too early to say that the articles have revealed the truth about the 1999 incident. 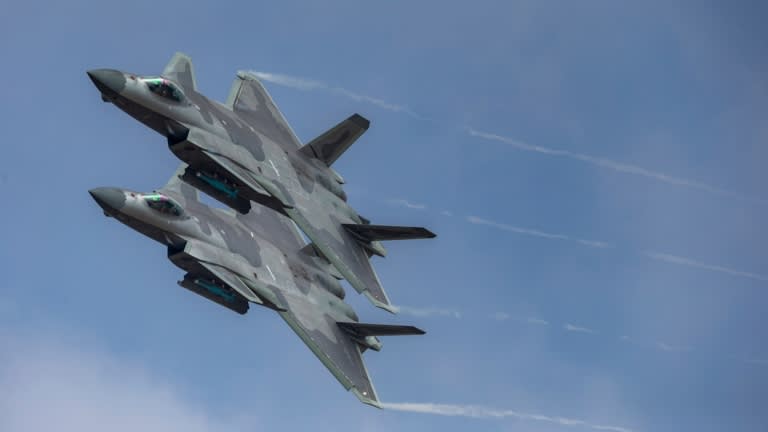 China has come a long way since 1999, and J-20 stealth fighters are a source of national pride.

But the change in China’s stance is noteworthy.

In China, opinions expressed online are under strict surveillance and control. Authorities can delete any online post they deem inconvenient. But the articles in question are not subject to deletion, except for some parts. It is natural to think that they have received tacit approval from Chinese authorities.

Why, then, have Chinese authorities given the de facto green light?

To begin with, most Chinese have believed that the embassy bombing was deliberate. Tossing in “evidence” to that argument further highlights the past sins of the Americans and unites the people behind the Chinese government as relations deteriorate.

Secondly, Chinese authorities are apparently highlighting the exponential advancement in its military technologies since the “humiliation in Belgrade.”

Both outcomes make the articles suitable content ahead of the July 1, 100th anniversary of the Chinese Communist Party’s establishment.

During the 1999 anti-U.S. demonstrations, Chinese students held banners with slogans such as “Don’t underestimate the Chinese people” and “China will become the world’s strongest country sometime in the future.”

It seemed to be a mere pipe dream at the time, but the goal is now within reach. Chinese President Xi Jinping delivers a speech to prominent domestic scientists at the Great Hall of the People in Beijing on May 28.

In a closely related development, Chinese President Xi Jinping on Friday delivered a speech to prominent domestic scientists at the Great Hall of the People in Beijing.

Xi, who doubles as the party’s general secretary, stressed the need to build China into a leader in science and technology and achieve “sci-tech self-reliance and self-strengthening.”

For China, military technologies form the core of the science and technology field.

Amid concerns about a possible supply chain disruption in the tech sector due to its confrontation with the U.S., China is clamoring for independent development of tech products that can help it march toward technological supremacy.

In its ultra-long-term plan to 2035, China seeks to catch up with the U.S. militarily as well as economically.

CCTV treated the J-20 as a source of national pride. 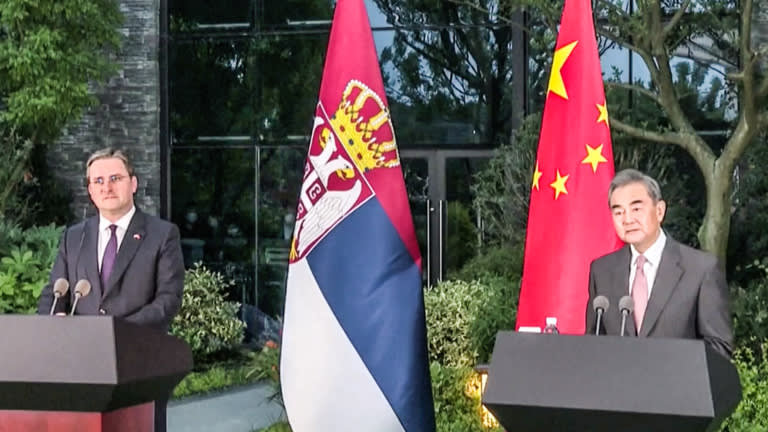 It seemed too much of a coincidence.

At his joint news conference with Selakovic, Wang said China’s cooperation with Central and Eastern European countries “focuses on pragmatic economic and trade cooperation, which does not involve the field of defense and security.”

China’s cooperation with Central and Eastern European countries “has never had geostrategic intentions, and [China] has no intention of engaging in any sphere of influence,” Wang said.

But when Chinese Defense Minister Wei Fenghe visited Serbia in March, he and Serbian President Aleksandar Vucic exchanged views on military cooperation. Together, they inspected a military drill by Serbian armed forces.

China and Serbia have historically had close security links. It is a relationship that has gained prominence due to the recent U.S.-China confrontation.

Now, 22 years on, the embassy bombing is not a mere piece of history but an element of today’s complicated international relations … and of China’s domestic politics.