It did not matter that China was on holiday. While the public was visiting graves and paying tribute to ancestors on the last day of the “tomb sweeping” Qingming Festival, Wang had an urgent message to convey to his counterpart in Tokyo.

The phone call offered Motegi a golden opportunity to air “serious concerns” about human rights conditions in the Xinjiang Autonomous Region, the Hong Kong issue as well as the China Coast Guard’s repeated incursions into the waters around Japan’s Senkaku Islands, which Tokyo controls but China claims and calls the Diaoyu.

Wang had a message. And delivering that message was so important that Wang picked up the phone knowing Motegi would land some punches.

A man cleans the gravesite of a relative in a cemetery during the Chinese Qingming Festival — Tomb Sweeping Day — in Hong Kong on April 6.

“China hopes that Japan, as an independent country, will look at China’s development in an objective and rational way,” Wang said, “instead of being misled by some countries holding biased view against China.”

That was the most important line of the phone call readout. Wang was drawing a red line for Japan.

What exactly is Xi most concerned about?

After the Wang-Motegi phone call, China’s Xinhua News Agency issued two documents. One was a straightforward report about the call. The other was titled “Japan should view China’s development with more positive mentality: Chinese FM.”

Paradoxically, neither of the documents touched on what is undoubtedly Xi’s biggest concern: the Taiwan issue.

For Xi, who aims to extend his reign as Chinese Communist Party general secretary beyond the party’s next national congress, in 2022, Taiwan is an issue that could make or break his political fortunes.

After their White House meeting, Biden and Suga are likely to issue a joint document. In it, they are expected to stress the importance of stability in the Taiwan Strait.

The strait is not a frequent topic of U.S.-Japan summit documents. In a 1969 statement, Japanese Prime Minister Eisaku Sato and U.S. President Richard Nixon stressed that peace and security in the Taiwan area plays an important role in Japan’s security.

In a 1969 statement, then-leaders Eisaku Sato and Richard Nixon pointed out that the maintenance of peace and security in the Taiwan area was important to Japan’s security. This was before the U.S. and Japan normalized relations with China and switched their diplomatic recognition from Taiwan to Beijing.

This year, the Taiwan Strait appeared in a joint statement after a U.S.-Japan “two-plus-two” meeting of foreign affairs and defense ministers in mid-March. “The Ministers underscored the importance of peace and stability in the Taiwan Strait,” the statement says, going on to criticize China by name over Taiwan and other issues, including the South China Sea.

In the past, two-plus-two ministers have urged a peaceful resolution of the Taiwan issue through dialogue. The latest statement, however, goes further than “urging” peace; it implies that the allies are considering a joint response to any dangerous situation that might arise.

It follows a warning by Adm. Philip Davidson, commander of the U.S. Indo-Pacific Command, that China could act to alter the status quo of Taiwan within the next six years.

“I worry that they are accelerating their ambitions to supplant the United States and our leadership role in a rules-based international order,” he told a Senate Armed Services Committee hearing on March 9. “They have long said that they want to do that by 2050.

“Taiwan is clearly one of their ambitions before that, and I think the threat is manifest during this decade, in fact, in the next six years.” 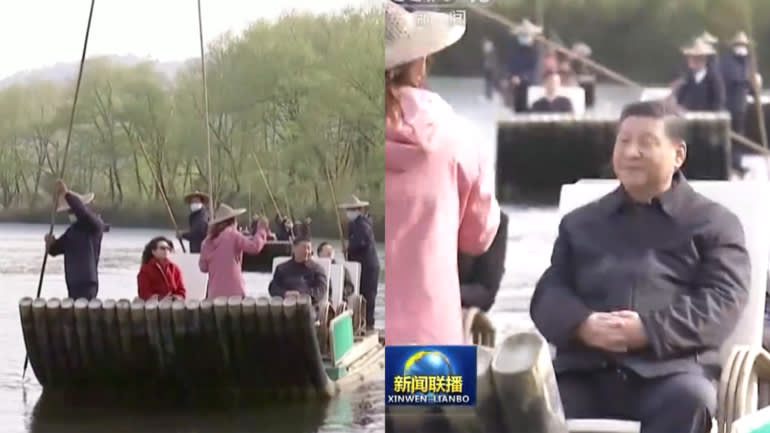 Xi Jinping shows Washington how much Sino-American tensions are bothering him during a raft ride in Wuyishan, Fujian Province. (Source photos from screenshot of CCTV’s website and CCTV/Reuters)

Three recent episodes show how important Taiwan is to Xi.

In late March, Xi was in Wuyishan, a famous tea-producing region in Fujian Province. He drank tea in a leisurely fashion and rode a bamboo raft down the river. The relaxed trip, with his wife, Peng Liyuan, by his side, was reported in detail by Chinese media.

Fujian is where the leader spent 17 years of his earlier career, starting in 1985. He and Peng spent their newlywed days in the province.

The inspection tour of Fujian from March 22 to March 25 came just after U.S. and Chinese diplomats held a heated exchange in Alaska. Xi was conveying the message that the icy meeting in the high north bothered him little.

His trip to Fujian, however, was a prelude to a major diplomatic stunt aimed at countering the formation of an anti-China coalition led by the U.S. and other Western nations. This became clear six days after he left the province.

Fresh from a tour of the Middle East, Foreign Minister Wang headed straight to Fujian. He visited the city of Nanping, a scenic spot at the foot of Mount Wuyi, and the coastal city of Xiamen.

The selection of Fujian for the talks holds political significance. 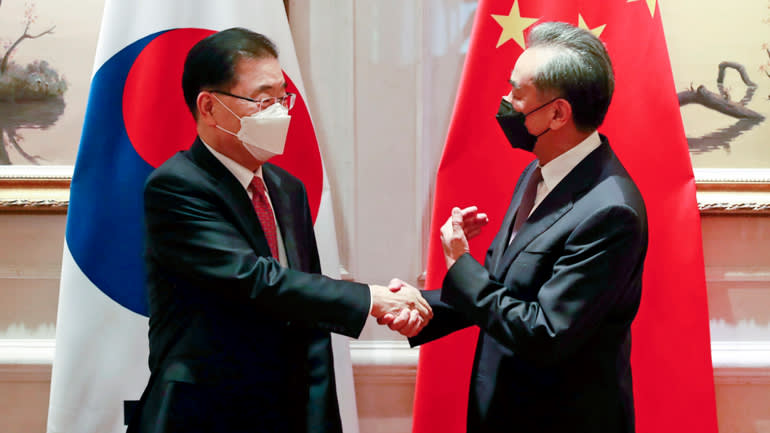 “Don’t forget,” instructed a blog post in a media outlet affiliated with the People’s Daily. “Just across the strait from Fujian is Taiwan. They are demonstrating to Taiwan that so many countries are supporting China.”

Xiamen, where Wang held talks with South Korean Foreign Minister Chung Eui-yong on April 3, is a particularly sensitive place amid rising tensions between the U.S. and China over the Taiwan Strait.

The common thread that runs through Xi’s leisurely inspection tour of Fujian, Wang’s talks with his ASEAN counterparts and his meeting with the South Korean minister is “Taiwan.”

On Monday — the same day that the Japanese and Chinese foreign ministers talked by phone — a spokesperson for the Chinese People’s Liberation Army Navy announced that a convoy of Chinese ships, including the aircraft carrier Liaoning, conducted a military exercise in waters near Taiwan.

Two days earlier, the Chinese carrier group had passed between Okinawa Island and Miyako Island before sailing south and reaching waters near Taiwan from the Pacific side. China flexes its military muscle along the Miyako Strait, a waterway lying between Okinawa Island and Miyako Island.

Amid the tensions, Japan holds a diplomatic card it can play. In mid-April, a two-plus-two meeting of Japanese and German foreign and defense ministers will be held for the first time, though virtually. The ministers will discuss security cooperation toward the realization of “a free and open Indo-Pacific.”

Beijing is highly alarmed by the move as the European Union, where Germany holds plenty of sway, recently sanctioned China over alleged human rights abuses against its mostly Muslim Uyghur minority.

On Wednesday, Xi spoke on the phone with German Chancellor Angela Merkel, telling her that Sino-EU relations were facing “various challenges.”

Since Alaska, Beijing has been waging a tireless diplomatic effort to avoid international isolation.

In the run-up to Japan and China next year commemorating the 50th anniversary of normalized diplomatic ties, there is no doubt bilateral relations will also be significantly impacted by the fierce U.S.-China confrontation.

It was in this light that the Japanese and Chinese foreign ministers abruptly held their lengthy talk, trying to grasp each other’s real intentions.

Yoshihide – Pfizer (PFE) Stock Sinks As Market Gains: What You Should Know

Everything you need to know about mobile sports betting

Yoshihide - Pfizer (PFE) Stock Sinks As Market Gains: What You Should Know