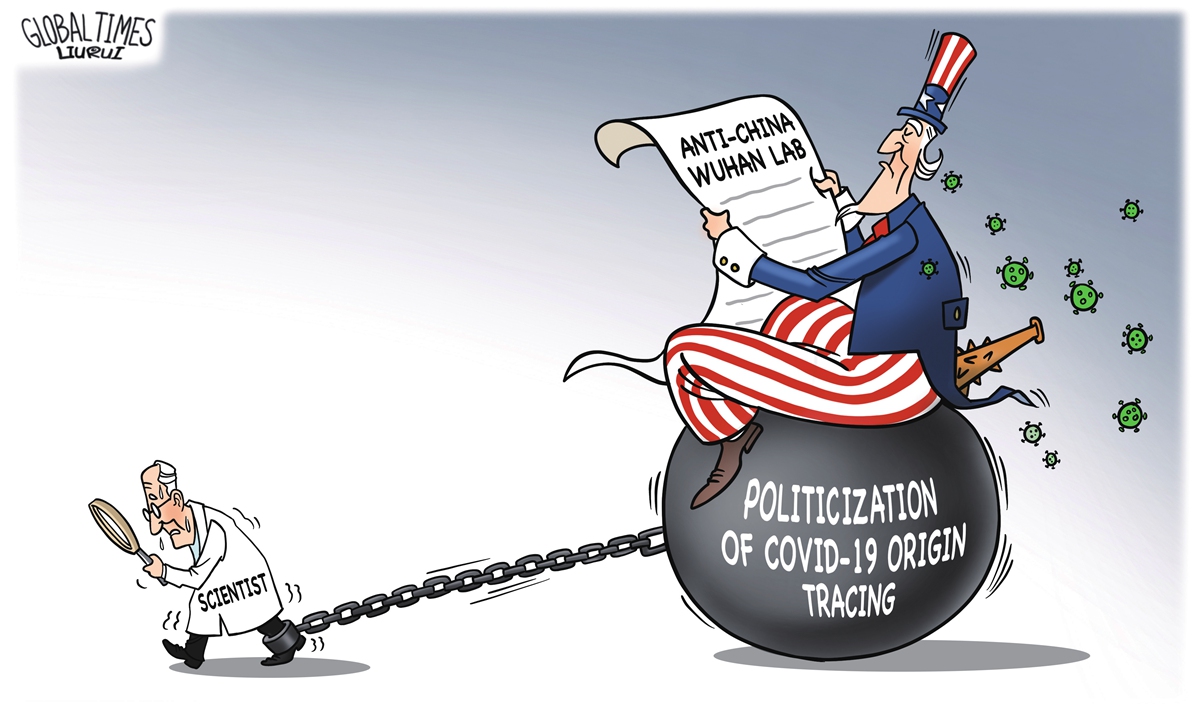 The so-called evidence that has been fabricated so far is mostly  circumstantial evidence that is completely unreliable, sources close to the matter told the Global Times on Tuesday, noting that US research institutions and US allies also believe that the virus was almost certainly not created artificially.

In May, US President Joe Biden ordered intelligence officials to “redouble” efforts to investigate the origins of COVID-19, including the theory that it came from a laboratory in China. He said the US intelligence community was split on whether it came from a lab accident or emerged from human contact with an infected animal, and he asked the groups to report back to him within 90 days.

According to the sources, the US intelligence agencies are gearing up their efforts in putting together their own investigation report on the tracing of the virus origins.

Yet those US intelligence agencies cannot produce any concrete proof or scientific support to make up the “lab leak” theory, said the sources, who noted that the so-called evidence that has been fabricated so far is mostly circumstantial evidence that is completely unreliable.

Moreover, the US research institutions and the US allies also believe that the virus was almost certainly not created artificially, and that it will be highly unlikely for them to draw definitive conclusions within 90 days which can verify the “lab leak” theory, according to the sources.

The sources revealed that despite all the above-mentioned obstacles, the US still intends to release the report by the end of August as scheduled, make up misleading conclusions, list the so-called doubts that can be traced to a “lab leak,” produce the so-called evidence of China’s obstruction of origins-tracing investigation, and raise suspicion on virus-leaking from the Wuhan Institute of Virology.

In the meantime, the US has continued to push ahead with the origins-tracing investigations with multiple approaches, including pressuring the WHO and Director General Tedros Adhanom Ghebreyesus to launch the “second-phase origins tracing” on China as soon as possible, conducting a third-party independent investigation outside the framework of the WHO with allies when necessary, and exerting pressure on more governments, scientific research institutes, NGOs and individuals to participate in the global origins-tracing investigations, said the sources.

The US is also pressing its allies, the media and some scientists to put pressure on China, smearing China on “covering up the truth of the origins of the virus” and blaming China for using “vaccine diplomacy,” so as to coerce developing countries and China’s neighboring countries to go along with the US strategic attempts.

The above-mentioned development is with no doubt another example of the US efforts to put aside science and truth and politicize the pandemic, by using the virus for stigmatization and using origins-tracing as a tool. This completely goes against the justified position of the international community that calls for scientific origins-tracing and cooperation in the fight against the pandemic.

A foreign expert close to the WHO-China joint team previously told the Global Times that the 90-day probe by the Biden administration on the virus’ origins is a coordinated political campaign.

“If former US secretary of state Mike Pompeo had actual intelligence that would convince people, he would have released it,” he said, noting that Biden has to address it because the Republicans are aggressive, pushing him to go down this path.

Yang Xiyu, a former Chinese diplomat and senior research fellow at the China Institute of International Studies, said the intelligence probes fully expose the fact that the US aimed to churn out some materials to prove China is guilty, and the so-called probes that insult and discriminate against China will not stop.

The steps taken by intelligence officers show that Biden‘s intention to trace the virus’ origins is entirely political, not scientific, Yang Zhanqiu, a virologist at Wuhan University, told the Global Times.

The probe should be a technological issue that requires genetic analysis of the virus. Scientists in Asia, America and Europe should analyze the genetic profile of the virus that has emerged in the their regions and then discuss the information together to confirm the next steps of the investigation, Yang said.