TSMC will make Intel CPUs on 3nm in 2022, largest order of 3nm process

It was rumored but now it seems to be confirmed — Intel is BFFs with TSMC — from a DigiTimes report that RetiredEngineer tweeted about. The report teased: “Intel signed a contract to outsource CPUs to TSMC using 3nm. Crisis of shortages and process falling behind will be resolved by the end of next year“.

Yep, it’s happened — Intel is outsourcing manufacturing of its CPUs after the clusterf*** that it has been over the last few years and into the talented hands of TSMC (Taiwan Semiconductor Manufacturing Company). RetiredEngineer provided a translation of DigiTimes report, which highlights some juicy facts: 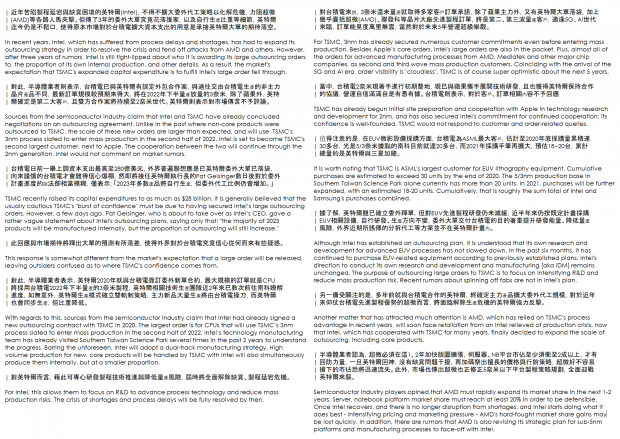 You can see there DigiTimes reports that its sources in the semiconductor industry say that Intel and TSMC have “already concluded negotiations on an outsourcing agreement. Unlike in the past where non-core products were outsourced to TSMC, the scale of these new orders are larger than expected, and will use TSMC’s 3nm process slated to enter mass production in the second half of 2022. Intel is set to become TSMC’s second largest customer, next to Apple. The cooperation between the two will continue through the 2nm generation, Intel would not comment on market rumors“.

The report continued, adding that “Intel had already signed a new outsourcing contract with TSMC in 2020. The largest order is for CPUs that will use TSMC’s 3nm process slated to enter mass production in the second half of 2020. Intel’s technology manufacturing team has already visited Southern Taiwan Science Park several times in the past 2 years to understand the progress. Barring the unforeseen, Intel will adopt a dual-track manufacturing strategy. High volume production for new, core product will be handled by TSMC with Intel will also simultaneously produce them internally, but at a smaller production“.

Analysts Have Made A Financial Statement On Archer-Daniels-Midland Company's (NYSE:ADM) Full-Year Report