by Alex Lowe
in ISRG Stock
0

Home » ISRG stock – Will Intuitive Surgical Be a Trillion-Dollar Stock by 2031?

A lot can happen in 10 years. For instance, online retail giant Amazon.com saw its market cap soar more than 1,900% to reach $1.7 trillion. And longtime shareholders reaped a big reward: a 1,700% gain in the stock price. Of course, we all would like to find the next trillion-dollar story. As long-term investors, we don’t mind buying now and sticking around for several years.

So, let’s turn to the healthcare sector and take a look at a growth stock with strong market leadership. I’m talking about Intuitive Surgical (NASDAQ:ISRG). The company is the world’s leading maker of robotic surgical systems. Can this player in a growing and innovative market become a trillion-dollar stock ten years from now?

First, it’s important to note that so far, the only companies that have reached the trillion-dollar valuation mark are in the technology sector. The biggest healthcare company is Johnson & Johnson, weighing in with a market cap of more than $440 billion. So, we can see that arriving at $1 trillion isn’t an easy-to-reach goal.

An increase in market cap happens in two ways. A company issues new shares. Or, simply, the value of a company’s stock increases. A combination of these two also does the trick.

Today’s trillion-dollar companies don’t have a greatly higher number of outstanding shares now compared with a decade ago. Some even have fewer. They have, however, boosted revenue in the triple digits. 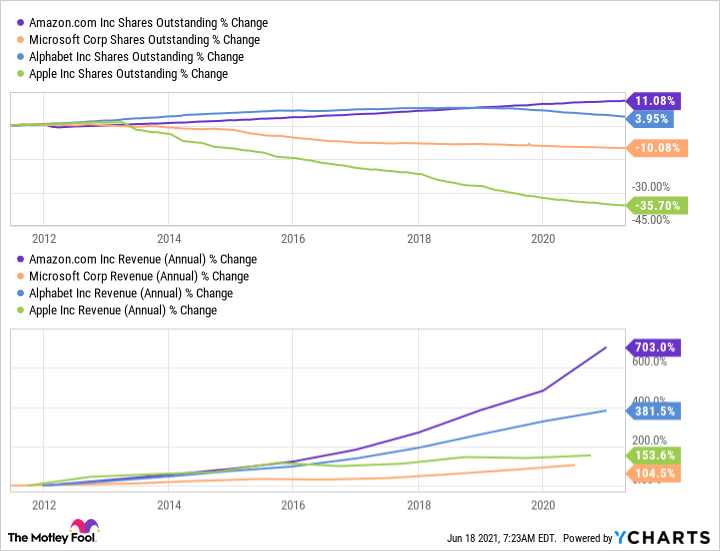 Intuitive has a good track record when it comes to revenue. The company’s annual revenue has climbed 148% to more than $4 billion over the past decade. But this level of revenue is much lower than that of our trillion-dollar companies. They report annual revenue in the hundreds of billions. 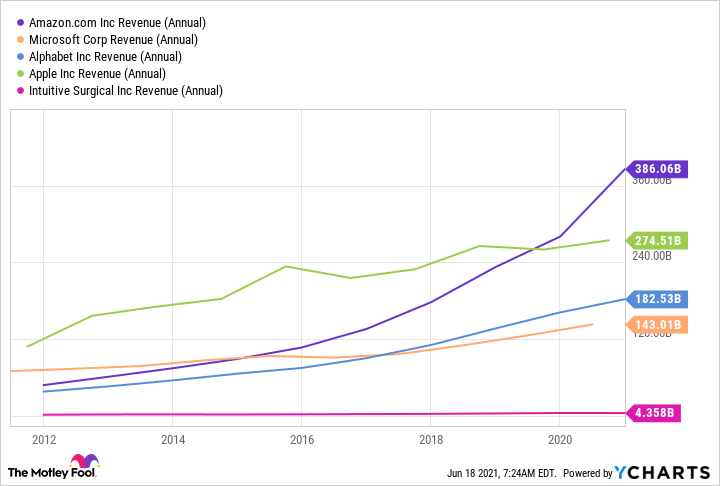 Still, strong revenue growth could result in big share gains — even if that revenue isn’t at the level of technology industry giants. And that, in turn, will lift market cap.

Now, let’s take a look at revenue growth potential. Intuitive holds more than 79% of the robotic surgery market, according to a BIS Research report. The company recently said its number of installed systems totals more than 6,100 worldwide. And procedures using the flagship Da Vinci surgical system increased 16% in the first quarter year over year.

The coronavirus pandemic put the brakes on Intuitive’s progress over the past year. That’s because many nonessential surgeries were postponed. Intuitive’s growth is recovering — and it should further improve once the crisis is over.

So, does this put Intuitive on the path to $1 trillion in market value?

Probably not. Revenue gains and procedure growth will boost the share price. But I don’t expect the momentum to be strong enough to reach the $1 trillion level.

Intuitive’s dominance in the market should help it to hold onto a big portion of the market for a while and continue to grow. But it is possible rivals will make inroads over the coming years. BIS Research even predicts Intuitive’s market share may fall to about 52% by 2031. That could mean slower revenue growth at that point. And that could limit share price gains. BIS expects the value of the entire robotics surgery market, at a 10% compound annual growth rate, will reach more than $16 billion in a decade.

Even if BIS’ scenario plays out, I’m still optimistic about Intuitive over the long term. The company will generate billions in revenue. Relationships it already has with surgeons and its innovation may keep it a step ahead of rivals. So, it’s a great stock for any healthcare portfolio — even if its market value stays under the $1 trillion mark.

BKNG Stock – Priceline Gives Travelers The Freedom to Explore With Even

Square Stock – Digital Wallets Could Lend a Hand to the Unbanked

Square Stock - Digital Wallets Could Lend a Hand to the Unbanked