Joe Biden – Joe Biden shows his hawkish side on China

Joe Biden – Joe Biden shows his hawkish side on China

After months of Republican concern that Joe Biden would be soft on Beijing, the new US president received unexpected praise from a leading China hawk after less than two weeks in the White House.

“President Biden [and his team] are off to a great start on China,” Robert O’Brien, the final national security adviser to Donald Trump said at an US Institute of Peace event with his successor, Jake Sullivan.

Following four years of turbulent policymaking, Democrats and Republicans expect a more structured approach under Mr Biden. But experts are watching closely for signs of how hawkish he will be towards the most important US bilateral relationship.

“The anxiety on what course Biden’s China policy will take is running really hot. This is true in Washington where there are strong concerns about a return to the Obama approach of the mid 2010s,” said Eric Sayers, an Asia security expert at the American Enterprise Institute, who said that some in Japan and Taiwan were also nervous.

The White House said Mr Biden would have “patience” as he engineered his China policy. But he has provided some hints about the future direction from the administration’s response to events in Asia and answers from some of his cabinet nominees in their Senate confirmation hearings.

One clear example has been on Taiwan. Before setting foot in the White House, Mr Biden invited Hsiao Bi-khim to become the first Taiwanese representative to the US to attend a presidential inauguration.

In his confirmation hearing, Antony Blinken, secretary of state, said Mr Trump had been right to be tougher on China. He later agreed that China’s repression of Muslim Uighurs in Xinjiang was “genocide”.

At the US Institute of Peace, Mr Sullivan said Mr Biden would work with allies on China. But he said he was prepared to “impose costs for what China is doing in Xinjiang, what it is doing in Hong Kong, for the bellicosity and threats that it is projecting towards Taiwan”.

The shift on Capitol Hill is bipartisan. There are Democrats who don’t want a softer approach

His words were a sign that Mr Biden would be tougher than when he was vice-president in the Obama administration and officials talked about encouraging Beijing to become a “responsible stakeholder”.

“This hypothesis that greater economic engagement with China would turn it into a responsible stakeholder on the world stage proved false — that era of US policymaking is over,” said Lindsay Gorman, a China expert at the German Marshall Fund of the US.

“Expectations of a Biden policy that is ‘soft on China’ don’t track with reality given the threats democracies face from authoritarian actors worldwide.”

While Mr Biden has taken actions that have been welcomed by some hawks, his team have also sparked concern.

In her confirmation hearing, Gina Raimondo, the nominee to head the commerce department, refused to commit to keeping Huawei, the Chinese telecoms equipment maker, on the “entity list” — which makes it very hard for US companies to export technology to companies on the list.

Michael McCaul, the top Republican on the House foreign affairs committee, said it was “remarkable and frankly disturbing” that she would not make a commitment. In the Senate, Marco Rubio and several other Republican China hawks, including Tom Cotton, have also raised flags, signalling a possible speed bump to her confirmation.

One former top official said Mr Biden would face vocal opposition from career bureaucrats if he took a softer approach towards China on issues such as Huawei, saying there would be “violent disagreement”.

Some critics also sounded the alarm when Mr Biden extended the deadline for a ban — created by the Trump administration — on Americans investing in companies with alleged ties to the Chinese military. But some experts privately said his team wanted time to clarify a policy that created confusion in the financial markets and said he was unlikely to reverse course because of pressure from Congress. 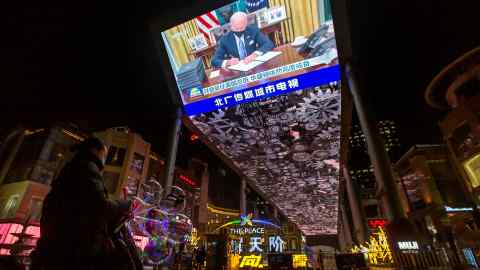 Paul Haenle, former China director on the National Security Council (NSC) under both George W Bush and Barack Obama, said Mr Biden had so far “done it right” on China.

“The Trump administration was right to make a shift, but the way they did it was self-defeating, very incoherent and scattershot,” said Mr Haenle, adding that the new administration would also have to contend with Congress advocating for a tougher approach to China.

“The shift on Capitol Hill is bipartisan. There are Democrats who don’t want a softer approach,” he said. “The key is to have a smart approach that aligns with US interests.”

Some Democrats worry that John Kerry, the international climate tsar and friend of Mr Biden, could push the president to compromise with China to secure a climate deal, prompting the former secretary of state to defend himself. “I know some people have been concerned. Nothing is going to be siphoned off into one area from another,” he said.

That concern has also been somewhat eased by the naming of Kurt Campbell, a China hawk, to co-ordinate overall Asia policy in the NSC, and the appointment of a cadre of next-generation China experts who are viewed as more hawkish on China, including Laura Rosenberger at the NSC, and Kelly Magsamen and Ely Ratner at the Pentagon.

“A new generation of Asia hands have emerged in the Democratic party that adopt a much more competitive-minded approach to Beijing,” said Mr Sayers. “It’s this group we now see moving into mid-level jobs across the administration and what leaves me encouraged.”

Apple - iPhone 12 vs iPhone 11: which Apple smartphone is the right choice for you?

Stock Futures - A Look At The Intrinsic Value Of Arcimoto, Inc. (NASDAQ:FUV)