The government’s handling of COVID-19 was until recently seen as a critical factor in drumming up voter support that could have put the Liberals into a position to convert their minority government into a majority in the next election, but it could now become a “liability” as Canadians are growing increasingly impatient about interruptions in the vaccine rollout, say some political insiders.

“The pandemic, which was once a slam-dunk political win for incumbent governments, is now becoming a potential liability with the vaccine, because Canadians are becoming increasingly impatient,” said Nik Nanos, founder and chief data scientist for Nanos Research, in an interview with The Hill Times.

Canadians started to receive COVID-19 vaccinations in mid-December. This is the country’s largest mass inoculation program in history. The Public Health Agency of Canada has said that all Canadians who want to be inoculated should be able to get their vaccine shots by September. Prime Minister Justin Trudeau (Papineau, Que.) has also promised that a majority of Canadians will be able to receive their vaccine shots by that time.

Recently, however, there has been some interruptions in the delivery of the COVID-19 vaccines from their suppliers, including Pfizer/BioNTech and Moderna. The government has said the supply will start to return to normal in the coming weeks.

Last week, the federal government announced that it had signed an agreement with Novavax to produce millions of COVID-19 vaccine shots in Montreal. However, the production of this vaccine will start at the end of the year, which means it won’t help the government reach its goal of vaccinating Canadians in the short term. The domestic production facility, however, will be helpful if there’s another pandemic in future.

As of last week, 1,014,435 doses of approved COVID-19 vaccines had been administered in Canada, which means about 2.2 per cent of the population has received at least one dose of the vaccine. By deadline last week, there were a total of 789,651 total cases of COVID-19 in the county, which have resulted in 20,355 deaths.

The Liberals had enjoyed a comfortable double-digit lead—with some minor interruptions—over the opposition parties for months, starting last spring, when the first wave of the pandemic exploded in Canada. Since the summer of last year, rumours have been circulating that the Liberals may call a snap election to capitalize on their popularity and convert their minority into a majority government.

Pollster Nik Nanos of Nanos Research says that the interruption in the vaccine rollout is causing a Liberal support to drop across the country. The Hill Times file photograph

In British Columbia, the NDP’s John Horgan called a snap election last fall and won a majority, becoming British Columbia’s first two-term NDP premier. Before that, New Brunswick and Saskatchewan also held elections in the middle of the pandemic that returned the governing parties to power with majority governments: a boost from minority status for the New Brunswick Progressive Conservatives.

In December, Prime Minister Trudeau told the national board of directors of the Liberal Party that it “looks like” the next election would happen in spring. But Liberal sources have told The Hill Times that a relatively smooth vaccine rollout was the key condition for a spring election.

Meanwhile, the recent hiccups in the vaccine availability have started to take their toll on the Liberals’ popularity, according to Nanos Research. As of last week, the Liberals were leading the pack with the support of 34.9 per cent of Canadians, followed closely by the Conservatives with 30.3 per cent. The NDP had 15.5 per cent support, and the Green Party had 7.4 per cent.

The Nanos survey also suggested that COVID-19 was the top issue for 43.6 per cent of respondents, more than than any other issue. The same survey indicated that 11.9 per cent of Canadians identified jobs/economy as their top-of-mind issue, 6.6 per cent mentioned the environment, and six per cent mentioned health care. The poll of 1,000 Canadians was released on Feb. 1 and had a margin of error of plus or minus 3.1 percentage points, 19 times out of 20.

“The Liberals now are moving into minority territory,” said Mr. Nanos. “So there’s only a five point gap between the Conservatives and the Liberals. At one point, they were enjoying a 13-point advantage; now that’s basically evaporated, with anxiety over the vaccinations, to only five percentage points. So there’s right now a negative trajectory on Liberal support.”

Mr. Nanos said it appears the window of opportunity for the Liberals to call a snap election will close if they can’t quickly fix the interruption to the vaccine rollout. Some Liberal sources interviewed for this story agreed that the bumps  in the vaccine rollout could complicate the party’s willingness to go to the polls this spring. They added that considering the fact that the next election will be decided on the government’s handling of pandemic, it’s important it gets it right to the satisfaction of Canadians.

The first anniversary of the pandemic lockdowns in Canada is in March, and Mr. Nanos said Canadians will evaluate the government’s performance by looking at metrics such as whether the economy is moving in the right direction, whether people are returning to work, whether people are still getting government cheques to stay at home, and whether they are less at risk than they were a year ago. He pointed out that now is a much more complex situation than last March, when the focus was on slowing down the spread of COVID-19 using social distancing measures such as wearing masks. The virus is mutating, and people are dealing with uncertainty over when they will be able to go back to work, and people are worried about their children’s schooling, and above all the interruption in vaccine rollout, said Mr. Nanos.

“The problem with the government in vaccinations, is it’s like telling someone, ‘The cheque is in the mail,’ ” said Mr. Nanos. “There’s no consolation to Canadians who are worried about their own health, and the health of their loved ones, to be told the cheque is in the mail when it comes to the vaccinations. And, so, I think it’s a much more serious time right now than it was at any other time in the pandemic.”

Frank Graves, president of Ekos polling firm, told The Hill Times that his polling is also confirming that Canadians are paying close attention to COVID-19’s health and economic impacts. He said his polling is showing Canadians are aware that they are going through a tough situation, which could become worse if more transmissible variants of the virus spread, but they believe that this could be resolved with the vaccine.

The Liberals are still polling ahead of the Conservatives, said Mr. Graves. He said that the interruption to the vaccine rollout did not appear to be suppressing Liberal support in his polls.

“I don’t find that [negative trajectory for Liberals], in fact, in my most recent poll, I see the Liberals with an eight-point lead, which is up,” said Mr. Graves. “So this is paradoxical.” 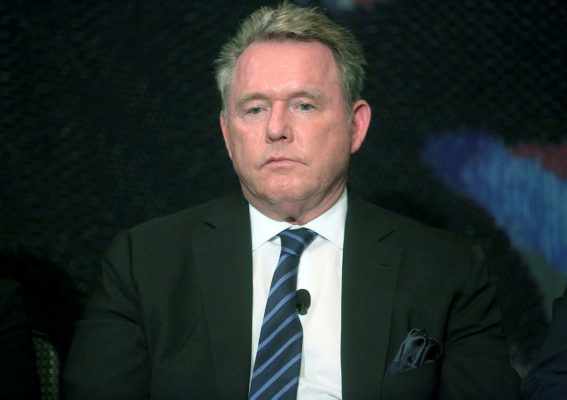 Ekos Research president Frank Graves says his polling is showing the Liberals are maintaining a stable lead over the Conservatives, despite the delay to vaccine shipments. The Hill Times file photograph

Mr. Graves argued that this could be because people believe in the federal government’s assurance that this is a temporary situation and the issue will be addressed within a few weeks. But Mr. Graves warned that if the government fails to deliver on its promises, there would be dire political consequences for the Liberals.

Mr. Graves did not rule out the possibility of a spring election if the government is able to fix the vaccine rollout issue by that time.

“The next election will be basically a referendum on how you handle the pandemic,” he said. “That will be No. 1. No. 2, closely aligned, will be, did you get the vaccine out in time? And depending how long it goes on, No. 3 is what do you plan to do with Canada coming out of this pandemic? Those will be the three ballot questions. None of them are entirely clear right now. The government’s done okay on the first one, but it will all go in the toilet if they screw up the vaccine rollout.”

According to last week’s Ekos poll, the Trudeau Liberals’ were the choice of 36.5 per cent of Canadians, the Conservatives were the pick of 28.1 per cent, the NDP 14.5 per cent, and the Green Party at 9.3 per cent. The poll of 548 Canadians was conducted between Jan. 29 and Feb. 3 and had a margin of error of plus or minus 4.1 percentage points, 19 times out of 20.

A Leger poll released last week also suggested that the Trudeau Liberals were leading all parties with the support of 37 per cent of Canadians, followed by the Conservatives with 28 per cent. The NDP was at 22 per cent and the Green Party at five per cent. The poll also suggested the government’s support in managing the pandemic has slipped from 60 per cent to 54 per cent. The online poll of 1,559 Canadians was released on Feb. 1 and had a margin of error of 2.4 percentage points, plus or minus, 19 times out of 20.

An Abacus Data poll of 3,930 Canadians released last week put the Liberals at 32 per cent, the Conservatives at 31 per cent, and the NDP at 18 per cent.