Justin Trudeau – The latest on the coronavirus outbreak for Feb. 2

Home » Justin Trudeau – The latest on the coronavirus outbreak for Feb. 2

Justin Trudeau – The latest on the coronavirus outbreak for Feb. 2

The National Research Council-owned Royalmount facility in Montreal will churn out tens of millions of doses of the vaccine developed by Maryland-based Novavax, Prime Minister Justin Trudeau announced on Tuesday.

Novavax submitted its vaccine to Health Canada for regulatory approval last week, the same week it reported positive results for its shot in clinical trials, including strong protection against the B117 strain of the virus first reported in Britain.

Last summer, Trudeau announced more than $125 million to upgrade the National Research Council (NRC) facility to produce vaccines domestically and avoid the global scramble for shots. At the time, Trudeau said the factory could produce hundreds of thousands of shots starting in November, but the project ran into problems when it was determined the facility didn’t meet exacting good manufacturing practices (GMP) required for such a site.

Those standards will still have to be met and approved by Health Canada after the construction of the NRC site is complete, which is expected in July. Trudeau was vague on the timeline of actually producing the Novavax product here in Canada, but Innovation Minister François-Philippe Champagne later clarified that the earliest possible production start date is likely “at the end of the year.”

Canada has been dealing with the impact of supply adjustments from both of the two approved vaccines, Pfizer–BioNTech and Moderna. As well, the European Union has also introduced new export controls that could result in some shipments being delayed or cancelled altogether because Canada’s current supply of shots comes from plants in Europe.

While Trudeau has frequently touted the signing of deals from several producers to ensure enough doses for every eligible Canadian to get vaccinated, Conservative Leader Erin O’Toole called Tuesday’s agreement with Novavax overdue and criticized Trudeau for “slow and inactive leadership on the vaccine file.

“Why did the Liberal government wait so long to act? When will domestically produced vaccines be available to Canadians — and how will Canadians get vaccines now?” O’Toole said. “Today’s announcement changes absolutely nothing in the short term. We need to do better.”

Watch from The National 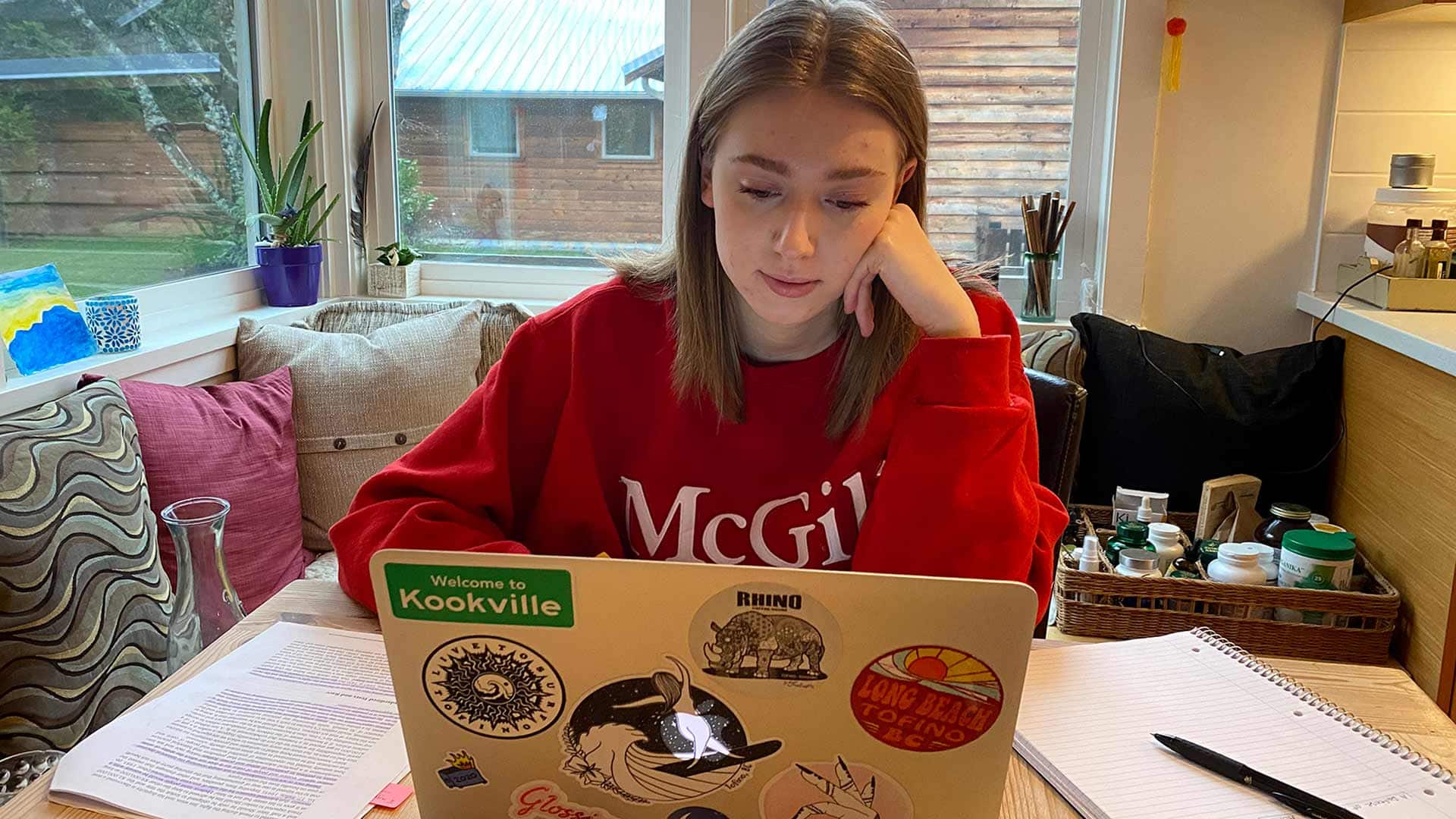 With application deadlines looming, Canadian high school students are considering their plans for higher education during the pandemic, with some choosing to wait until in-person classes resume. 5:54

Quebec could reopen non-essential businesses, push back curfew in regions

Quebec Premier François Legault and his government were considering a loosening of some pandemic restrictions, including a later curfew and the reopening of restaurants in some parts of the province, and non-essential businesses provincewide.

Legault was to address the province after 5 p.m. on Tuesday with more details on the way forward.

Legault has said he would relax rules in certain regions if the number of hospitalizations dropped. Radio-Canada has reported the government had a final meeting Tuesday morning to discuss the proposed changes before they are announced publicly.

The proposals include allowing non-essential businesses to reopen across Quebec. Shopping centres would be allowed to reopen with occupancy rules and physical distancing enforced. In orange-zone regions, the curfew would be pushed back to 9:30 p.m. and in-restaurant dining could be permitted for family bubbles.

Benoit Barbeau, a virologist in the department of biological sciences at the Université du Québec à Montréal, called the prospect of loosening restrictions “risky” because of the presence of variants and a slower-than-anticipated vaccine rollout. He characterized it as a short-term gamble by the government to see if cases start to go up, in which case it can still respond quickly with tighter restrictions.

“It’s a very delicate and fragile situation, whereby relaxing conditions, you really need to make sure, you have the right testing in place so that whatever goes wrong, you can quickly detect it and make sure you can quickly go back to those restrictive measures,” Barbeau said.

Read more about the state of the pandemic in Quebec

Cancers undetected during the pandemic could be an ‘impending disaster,’ specialists warn

A recent study by Canadian and British researchers found there was a significant impact on a person’s mortality if their cancer treatment was delayed. The authors found that for every month of delay, the risk of dying increases on average by 10 per cent.

At Jewish General Hospital in Montreal, doctors say they are already seeing the repercussions of the pandemic’s spillover effects due to delays in cancer screening and diagnostic testing.

Dr. Gerald Batist, medical director of the hospital’s Segal Cancer Centre worries about “an impending disaster.” He said his facility hasn’t fully recovered its capacities from the first wave of the coronavirus, let alone Quebec’s current state of lockdown.

“Newly diagnosed lymphomas and leukemias at a much more advanced stage, breast cancer as well, where people had just kept these things to themselves and managed symptoms,” he said.

With respect to colonoscopies, 60,000 fewer were performed between April 2020 and the beginning of January than the same period the previous year, according to the province’s health ministry.

Barry Stein, president of Colorectal Cancer Canada, hopes the grim reality of the statistics forces the province to rethink the way health care is delivered, including proactively contacting by mail those who reached the age where screening for colorectal cancer, which can be preventable, is advisable.

“We have to plan for the future, not just be reactive,” said Stein.

Read more about the situation

Since it opened in September, the COVID-19 isolation hotel in Toronto has been operating, on average, at just below 40 per cent capacity.

Bernadette Lettner, a registered nurse with South Riverdale Community Health Centre and part of the COVID case management team at Michael Garron Hospital, said often, when public health officials call someone to discuss their positive diagnosis, it’s too late in the course of their infection for people to be referred to the hotel, or for them to leave their homes.

“The unfortunate thing is we’re using these on day four and five instead of days one and two,” said Lettner.

“Isolation sites are a lovely public health intervention, but getting access to those sites has been something that’s been incredibly difficult for the people in the communities that we’re working with,” she said.

Harjeet Sahota, a lawyer in Peel Region near Toronto, wishes he had known about the option when the local public health unit informed him of his positive test result. Instead, he isolated in his multigenerational home, but others got sick. His grandmother died on Jan. 7 after battling the virus.

“We lost a family member potentially because of this mistake and maybe someone else’s life could be saved if they inform people when they call,” he said.

Toronto’s Associate Medical Officer of Health Dr. Vinita Dubey said it’s more about ensuring those who need the sites can access it, rather than how full it is.

“I think if there are more people who need to use the isolation and haven’t used it, that’s really what we need to address next,” she said.

Ontario currently has a half-dozen sites up and running for patients who can’t quarantine safely at home, though most have only been open less than two months. Based on isolation periods of 10 to 14 days, a single hotel room can be used by two different guests each month.

Read more about the challenges

Inside an ultra-cold freezer, the super-chilled home of some COVID-19 vaccines

Ultra-low-temperature freezers have long been standard equipment in medical laboratories. But they’re suddenly a hot topic, thanks to their vital role in COVID-19 vaccine distribution.

“Frozen is not necessarily frozen. We have different degrees,” says Dr. Patricia Cousins, manager of medical laboratories at the faculty of medicine at Memorial University in St. John’s. “Things like mRNA, for example, that everybody knows about because of the Pfizer vaccine and the Moderna vaccine, those things are very small stretches of nucleic acids, and they’re not super-coiled or twisted around each other like DNA. So those items are very prone to degrade.”

In the faculty of medicine at Memorial, a few dozen ultra-low-temperature freezers are in use for ongoing research. To protect the integrity of the substances inside, the freezers are kept in areas off-limits to the public, electronically monitored at all times for even the slightest rise in temperature.

The team there granted CBC News access to a freezer that had been emptied and decontaminated. In the name of science, CBC’s Zach Goudie put a tray of fruits, vegetables and kid snacks inside the freezer for four hours.

What transpired next could be considered a smashing success.

Find out more about COVID-19

For full coverage of how your province or territory is responding to COVID-19, visit your local CBC News site.

To get this newsletter daily as an email, subscribe here.

See the answers to COVID-19 questions asked by CBC viewers and readers.

Still looking for more information on the pandemic? Reach out to us at covid@cbc.ca if you have any questions.

Donald Trump News - Report: Trump may be able to legally live at Mar-a-Lago