I think the first time I became aware of the rivalry that seems to exist between hardcore bikers and car enthusiasts was about 17 years ago when I was still in high school. The beginning scene in the movie “Torque” shows the main character, riding an Aprilia motorcycle, passing two cars that were drag racing, at a speed that makes the sign on the side of the road spin, while reading: “Cars Suck!”

As I grew older and eventually became more involved in motorcycle communities, I realized what the main reason bikers are annoyed with car owners was. And it also made sense why car owners are sometimes annoyed with bikers. Both sides tend to think that they’re more responsible and careful and that the others are reckless. But anyone who has experienced both cars and bikes will tell you that the truth is somewhere in the middle.

That being said, we’ve often seen bikes go up against exotic cars or tuner cars, and the outcome is usually in favor of the people that chose two wheels instead of four. We’ve just recently featured a Suzuki Hayabusa going up against a big-horsepower Toyota Supra, and that could have gone either way. But when I came across this video of a BMW S1000RR taking on a pack of supercars, I had a hunch that those on four wheels would not prevail.

This is a seemingly brand new motorcycle, and it should be packing just slightly over 200 horsepower and about 83 lb-ft (113 Nm) of torque, which is nothing short of remarkable for a package that weighs 434 lbs (197 kg). It has been just a little over 10 years since BMW first launched the S1000RR, but it has already made a name for itself as one of the fastest bikes on the market, and you can get a 2021 model for $16,695 before tax ($495 destination charges).

The event was held at Turweston Aerodrome, near Brackley, in the United Kingdom, and saw quite a few top-end vehicles being driven over by their owners. The first car to line up to race against the S1000RR is a Ferrari 488 Challenge Evo, which comes with 670 horsepower and a whopping 560 lb-ft (760 Nm) of torque. While the weight is just under 3,000 lbs (1,360 kg), there is still a significant gap when you look at the power to weight ratio.

The Ferrari is fast, but it doesn’t even come close to the bike, and the S1000RR finishes in 1st place, after what seems to be about a quarter-mile (402 meters) worth of tarmac. After the race, the rider is back on the line, and admits to being worried about one of his next opponents, an electric vehicle: ” The one I’m actually terrified about is the gent in the Tesla over there because I’ve just watched a couple of the Teslas go off the line and they are ballistically quick”

The BMW and the Tesla line up for their race and the Model S takes the lead from the very first moment. By the moment the S1000RR shifts into second gear, they are neck and neck, and the bike looks like it’s teleporting itself further away as it hits 174 mph (280 km/h) down the runway, making a fool of its electric opponent. A McLaren 720s is up next, and while it manages to keep up for the first part of the race, it is left behind once speeds increase.

We get to see some more action, as someone in a BMW M5 decides to challenge the S1000RR. We don’t get the exact spec of the M5, but even if it has 4 times the horsepower of the bike, it’s bound to be at least 9 times as heavy, so you can probably guess the result already. One of the most exciting races of the day, from a noise point of view, is the one against a tricked-out Ferrari F12. But run after run, the S1000RR is simply unbeatable. 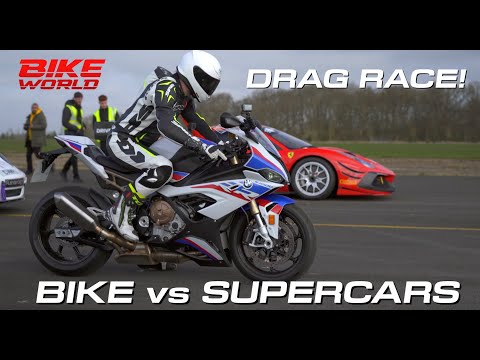 Personal Finances News – What does it mean to be prequalified for a personal loan?

Sport Cars – How to Nail the Pigtail, With Sabrina Porsche and Shay Mitchell