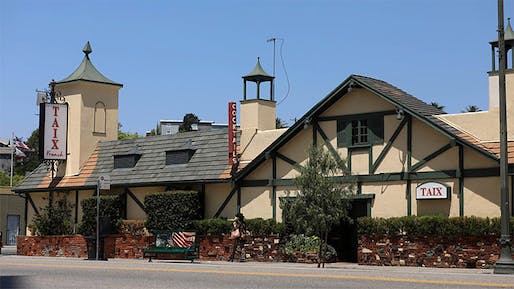 LA’s famed Taix Restaurant on Sunset Boulevard made headlines earlier this month after a strange ruling by the City Council to designate only certain elements of the century-old establishment a historic landmark in an unprecedented move that could have ramifications for preservation efforts in Los Angeles and across the country for years to come.

The LA Times is reporting that efforts to save Taix from an encroaching redevelopment scheme culminated in a unanimous decision to limit the designation to the restaurant’s signage and cherrywood-topped bar.

The decision is unlike any other in recent history in that it eschews almost the entirety of the Norman Revival building in favor of a plan that recognizes only non-structural components as historic landmarks. By limiting the designations to the bar and advertising, critics say Los Angeles City Councilmember Mitch O’Farrell has created a dangerous standard that can be abused by development-hungry business interests where the opportunity to make money comes into conflict with the idea of a city’s material culture as valuable and even sacred.

The ire of preservationists is underscored by the new plan that calls for yet another mixed-use development by dangling a slim carrot of affordable housing to entice approval for a multi-million dollar project which is in reality 86% luxury condos.

“It’s somewhere that you’re going to go, not to just eat — you’re going to go to feel something. To feel together and feel like you belong, and that the city means something to you other than real estate,” local resident Susan Winsburg told the Times.

Another obstacle comes in the form of Taix’s owner, who has thrown his support behind the plan that would allow the restaurant to continue on in some fashion, claiming the costs of running the establishment as it presently stands have become too onerous –– a position opponents see as a dodge meant to help property developer Holland Partner Group avoid an Environmental Impact Report required to demolish a historic building in the city.

Holland spent over $170,000 in lobbying efforts last year, according to the Times.

Although little chance remains to save the current iteration of Taix following the failure of the landmark push, some are hoping its legacy and status as a memory site will in the end become its saving grace; an emotional appeal that places community over profiteering. A sentiment at the heart of many preservation efforts nationwide.

“Taix is wildly popular, an essential Echo Park destination for people of all walks of life,” one opponent said in a friends of TAIX Facebook announcement. “The community has come together here for 70 years to celebrate events and make business connections, to watch the game or the band, to meet old friends and make new ones. It has a Wikipedia page, and ‘Taix Square’ is the official city designation of that section of Sunset Blvd. It is the place itself that is authentically, organically inviting and unique. Please don’t destroy it.”

Similar articles on Archinect that may interest you…