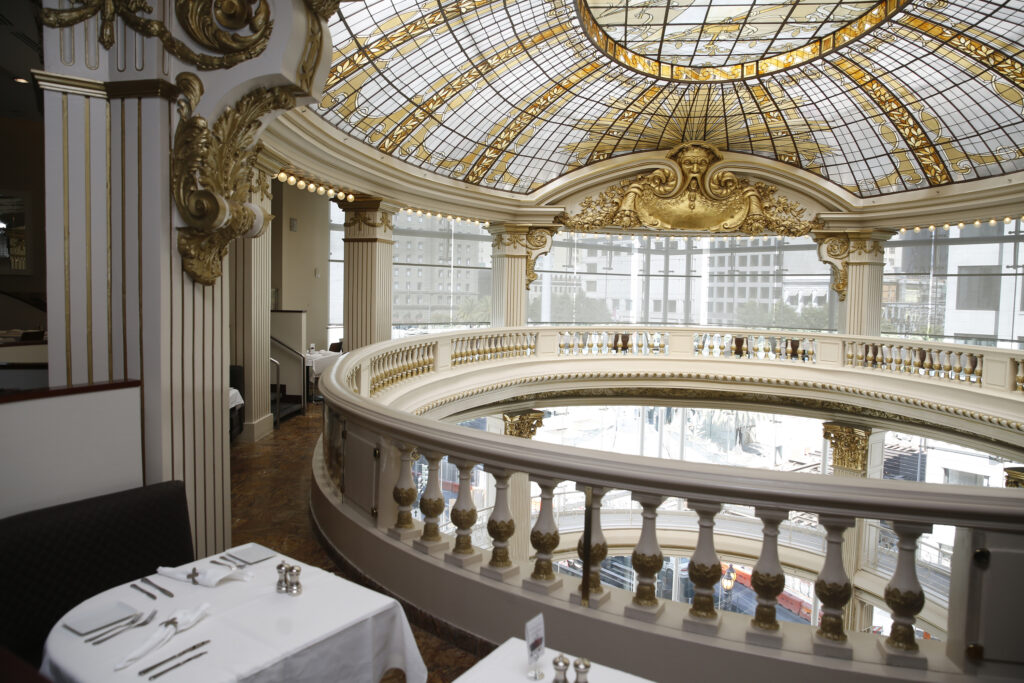 The Rotunda restaurant and the City of Paris glass dome at Neiman Marcus in San Francisco in 2015. Photo: Liz Hafalia / The Chronicle 2015

I like to use the main Neiman Marcus entrance on the corner of Geary and Stockton when I meet people at the Rotunda restaurant. The private elevator is quicker, but the view from four floors up into the gold stained glass dome from the lobby is worth it.

The space evokes for me the 1950s San Francisco of Alfred Hitchcock’s “Vertigo” and the ghosts of the carriage trade retailers of the era. The dome and surrounding balconies are the last Beaux Arts vestiges of the City of Paris department store, which was demolished in the early 1980s to make way for Phillip Johnson’s Neiman Marcus building clad in red-checkerboard granite.

For many San Franciscans, whether they ever shopped at either store or not, the dome is as much a part of the character of Union Square as Alma Spreckels on her pedestal. During the holidays, families still visit the store to take in the 80-foot tree displayed beneath the dome, a tradition from the City of Paris days.

The Rotunda restaurant, like Neiman Marcus itself, is a special occasion place for some, and a second home for those who can afford to take up residency in its plush booths. Regulars aside, you often see people splurging at the tables overlooking the railings, their laughter and the pops of Champagne corks echoing.

I love the sense of decorum people bring to these lunches: The restaurant is one of the few places outside of church I regularly see women wearing hats, as though to answer Stephen Sondheim’s query “Does anyone still wear a hat?” from his song “The Ladies Who Lunch.” There’s also the usual society page figures and store clients dressed head to toe in whatever designer is giving a charity trunk show in the private dining rooms.

Add the out-of-towners who come for the view of Union Square and the famous popovers and broth served before the meal, and you have a fabulous melange for people-watching. There are quiet corners that are good for more clandestine meetings, but the Ro’ (as it’s called by some regulars) is really a place you go to be seen.

Returning to the Rotunda on June 14, the restaurant’s first day open since March 2020, I felt past and present surround me like perfume as I joined my friend at a table overlooking the square.

The Rotunda at the San Francisco @neimanmarcus is open again and the famed broth and popovers are back- and so are the models and the people watching. Union Square was bright and clear, not a bad view. pic.twitter.com/YQMRamBvDz

Growing up, I bought my “Vamp” nail polish from the Chanel counter downstairs (it was a thing in the late ’90s) and would listen to the clinking glasses and gossipy din coming from the Rotunda above. I remembered a day a couple of years later when two of my favorite high school teachers took me to lunch there to celebrate my first college internship. That day, I noticed for the first time that under the ship depicted in the stained-glass dome were the Latin words fluctuat nec mergitur. Looking up from our table at the reopening, I saw those words again and wondered about their meaning.

Even a day away from the state’s official reopening, I noticed Union Square became steadily busier over the course of our lunch. Other signs that life was returning included the comeback of construction obstacles on Geary and Stockton streets and a line outside the Louis Vuitton boutique. I looked out at the white marble facade of the former I. Magnin building, now the former Macy’s building, and wondered about the fate of a less well-known retail landmark in the area — Timothy Pflueger’s storied green marble women’s powder room on the building’s sixth floor — now that it was being converted into luxury condos.

I thought about all that I’d seen vanish from Union Square in my lifetime, from I. Magnin and Blum’s (of the famous coffee crunch cake) to F.A.O. Schwarz and Barneys. I thought about how even though the old City of Paris Building was long gone, its glamorous rotunda core and dome remained, but in a new context. I wondered if that’s what the return to “normal” had ahead for us: holding onto some sense of how things were but in a new, yet-to-be determined post-COVID context?

Before I could look up the Latin phrase in the stained glass, a friend commented on a picture I’d posted of the dome and beat me to the punch. It was the motto of the actual city of Paris. Fluctuat nec mergitur: “Battered by the waves, but does not sink.” They felt like the right words for the occasion.