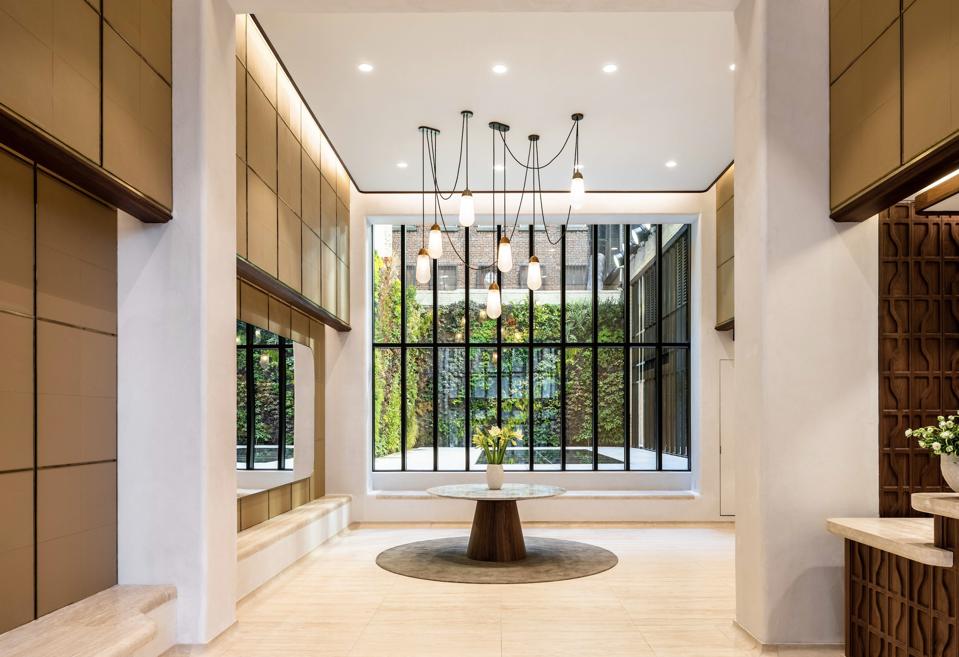 The tower, which makes a mark on New York City’s skyline and is one of the tallest in the area, spans 30 stories (at 290-feet high) and has 170 loft-style residences. The condo building has studios to three bedrooms, including penthouses, with pricing ranging from $1.1 to $7.95 million. It pairs high design with French elegance.

The exterior of Greenwich West.

“In contrast with the rugged firmness of the brick face, the squircle corners capture light, highlight and characterize the building in a singular manner,” she says. “The rounded corners typify Greenwich West giving its mass a softer and subtle nature as if the corners have been rubbed out.”

She says the rhythm of the façade was very important, so that residents would enjoy views across the Hudson River and Manhattan. She also said it was important to infuse a unique feel to the building.

“In our globalized world, cities all tend to look alike,” she says. “They erase their cultural specificities. We wanted to keep the window frames that represent the beauty of New York from its origins and a feature that is still present in the district, and we also wanted to make a building that was both very classic, chic and elegant.”

A kitchen in a residence, featuring white oak flooring and marble.


Raynaud seamlessly pairs 20th-century French design with a New York loft-style feel, but wanted to keep a sense of simplicity, which she says is the most difficult thing to do in architecture. She enlisted the help of Parisian designer Sébastien Segers, who designs private homes, spas and boutiques, like Giorgio Armani and Christian Dior.

Upon entering Greenwich West, residents will walk up grand marble stairs to a double-height lobby, made with travertine, leather-paneled walls and rosewood millwork. Segers wanted residents to feel the building’s personality through the materiality.

The soft curves on the interior architecture match the exterior façade.


“The interiors at Greenwich West draw inspiration from simple and singular design themes and their variations, associated with the sensuality of crafted natural materials,” Segers says. “For example, all the windows boast deep with welcoming ogee curves in white Carrara marble, while the kitchen countertop and bathroom vanities are sculpted with another ogee in marble and American Walnut wood.”

In addition to the interior walls being curved and hand-plastered to mimic the building’s curved exterior, Segers is excited for residents to experience the indoor-outdoor continuum through the large and deep windows, terraces and the amenities, like the gym and rooftop.

“There is so much authenticity and serenity that we have breathed into the project, particularly present in the composition of the grand hall with the minimalist patio and the sculptural fireplace lounge,” he says.

Amenities and services include a 24-hour lobby concierge, resident manager, porter and handyman, a rooftop terrace with lounge areas, an indoor lounge, entertainment suite, parking garage with secured access to residential elevators, laundry facility, bike storage and additional storage. There is also a top-notch fitness center by The Wright Fit, featuring a yoga studio and spa, and a children’s playroom designed in collaboration with The Children’s Museum of the Arts. There’s also a courtyard called the Viewing Garden designed by French botanist Patrick Blanc. It features an 18-foot vertical garden with a variety of plant species throughout the wall.

There is also exclusive artwork by fine artist Aaron Zulpo that can be seen throughout the building.


The building is sustainably designed, something Raynaud is very passionate about, and is developed by Strategic Capital.

The up-and-coming Hudson Square neighborhood is home to several luxury residential buildings, fabulous restaurants and boutiques. Disney and Google are also building their headquarters in the Hudson Square neighborhood. With perfect walking distance to the paths along the Hudson River to easy accessibility to the West Side Highway and walking distance to everything Downtown New York has to offer, you will be hard pressed to find a better location than Greenwich West.


The building welcomed residents in Fall 2020, but many of Greenwich West’s beautiful luxury condos are still for sale.

Louis Vuitton – As Christie’s and Sotheby’s Sell Dueling Basquiats This Week, Here Are the 10 Most Expensive Works by the Artist Ever Publicly Sold