Here is an extremely powerful Porsche 911 Turbo S, from the 991 generation, that will make you say: “911 GT2 RS? What’s that?”
The heavily modded German supercar was filmed at the SCC500 event in Germany firing up its engine and revving it in front of the camera, prior to putting its money where its mouth is and drag racing a few vehicles.

The second generation Audi R8, one crazy RS6 Avant, an Aston Martin Vantage, a couple of BMW Ms, such as the M5 and M6, and an AMG, sat head-to-head with the said 991 at the start line and tried to beat it to the finish line, from a rolling start.

Your dream Porsche might have over 800 horsepower in Forza or Gran Turismo, but this HPT-tuned 911 Turbo S has 820 HP in the real world. According to the video uploader, the seriously fast machine ran the rolling kilometer (0.62 miles) at almost 303 kph (188 mph), and by the looks of it, it could very well be a sub-10-second car down the quarter mile.

So, we do hope to see it in action again in the not-so-distant future. In the meantime, however, we will refresh your memory by telling you that without any outside intervention, the stock 991.2 911 Turbo S Coupe will rocket you to 62 mph (100 kph) in a dizzying 2.9 seconds. And if you’re brave enough, then the speedometer will read 205 mph (330 kph), according to Porsche. 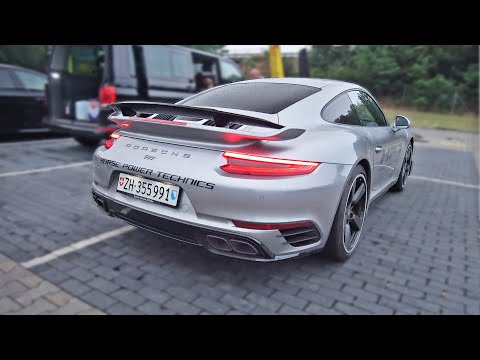