After rebuking the offensive grille that debuted on last year’s 4-Series coupe, we have to admit the 2021 BMW M4 is starting to grow on us, and we don’t really know how to feel about it.

On the one hand, you want to like an M4 since it’s arguably the sweet spot of BMW’s entire M Performance range—plenty of performance and that two-door silhouette you want in a sporty car, yet fairly accessible compared to the rest of the models.

On the other hand, it forces us to admit that maybe we were wrong to criticize the design so quickly without first giving it the benefit of the doubt. However, we won’t do that just yet. We never said we liked the grille; we’re just saying maybe it stopped seeming like the ugliest thing this world has ever seen, which is progress.

No matter how you feel about the M4’s bucked teeth, you probably love its technical sheet. In Competition guise, as is the case here, the Bimmer puts out 503 hp (510 PS) and 479 lb-ft (650 Nm) from its 3.0-liter twin-turbo straight-six while also keeping things real and sending all that power to the rear wheels alone through an eight-speed automatic. On top of that, the Competition benefits from having a set of Michelin Pilot Sport Cup 2 tires, a considerable upgrade on the Pilot Super Sports the regular model gets.

Fortunately, the Porsche 718 Cayman GT4 it goes up against features the same type of rubber, which eliminates one variable that could have tilted the result one way or another. The resemblances, however, end there as the Cayman is down on power (414 hp and 310 lb-ft/420 Nm of torque), lacks a turbocharger (not necessarily a bad thing), has a bigger engine (4.0-liter boxer) and a six-speed manual, but is also 660 lbs (300 kg) lighter.

With all that in mind, which of the two do you expect to lap a circuit faster? No real need to answer since we all know a technical track is where the Porsche 718 Cayman, especially in GT4 form, shines. Watch the clip below to see what former British racing driver and current Fifth Gear TV show host Jason Plato thinks about the two vehicles after hot lapping the Castle Combe circuit. 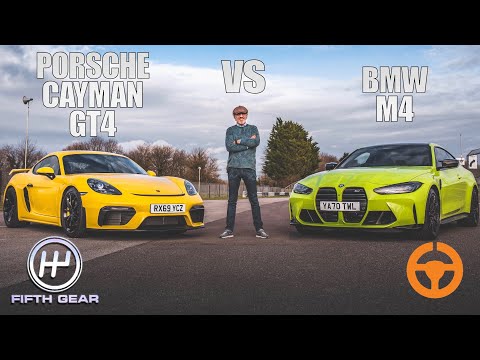 Louis Vuitton – How much is the Star Wars actor worth?

Gucci – From Halston to The Crown