It’s difficult to overstate the impact that the Porsche Taycan has had since it arrived, both on the brand itself and on the wider car industry. Not only has the Taycan redefined what people thought an electric car could do, but it’s also the physical representation of how Porsche has shifted its business focus – and arguably even its whole ethos.

Look at the millions of euros the firm is chucking at digital start-ups if you want proof of that. Porsche even has its own sub-section, called Forward31, designed to build a portfolio of digital business.

It’s all a far cry from the brand-defining victories at the Targa Florio and Le Mans: gone are the days of Porsche representing only class-defining ICE sports cars. The Taycan is now the pivot point for the Stuttgart brand, where its high-performance products are joined by the electric upstart.

So it shouldn’t come as much of a surprise to learn that the Taycan family is expanding, first to this, the Taycan Cross Turismo. Here we’re driving a prototype version of what will be the Turbo S variant, but it’s not far off what will arrive this winter overseas. 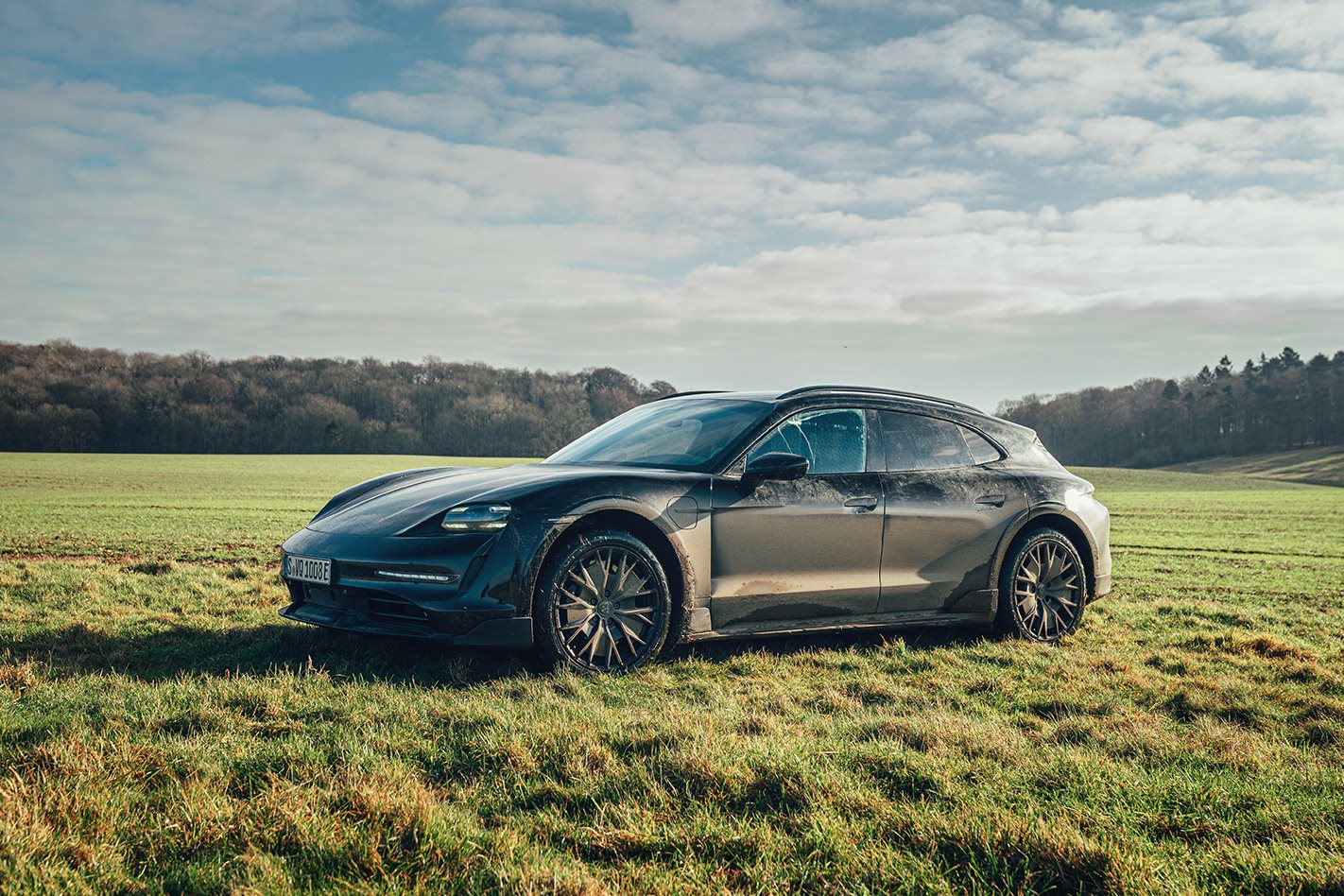 As is immediately obvious from the pictures, this is the more practical version of the Taycan sedan, much like the Sport Turismo is the booted version of the Porsche Panamera hatchback. As such, there’s a healthily sized boot on the Cross Turismo – up to 1200 litres. Below the parcel shelf, the difference doesn’t look as marked (exact figures aren’t available yet), but still, this is very much an electric Porsche that can easily do the whole family-transport thing.

There are further visual distinctions elsewhere, such as different wheels, a larger panoramic fixed glass roof and the roof rails in black (the last two both optional). Like the Mission E Cross Turismo concept from 2018, it comes with wheel-arch extensions, while it’s also the first Taycan to get a tow bar. Don’t go thinking that you can strap your caravan to it, though, because it’s purely to allow a bike carrier to be fitted. How very ‘lifestyle’.

Inside, there’s also an extra 36mm of head room in the rear. That doesn’t sound like much but, coupled with the larger panoramic roof, it certainly helps make the cabin feel airier back there. The Cross Turismo uses the same skateboard battery pack arrangement as the regular Taycan, including the ‘foot garages’, so the rear is comfortable for adults.

The dashboard is largely identical to that of the Taycan saloon, save for a compass instead of the usual Sport Chrono clock. As such, the triple- screen set-up dominates, running all the way from in front of the driver to just ahead of the front passenger. These are all easy to operate, although, as with most touchscreens, there’s an element of ‘prod and hope’ in order to hit the button you want without taking your eyes off the road. 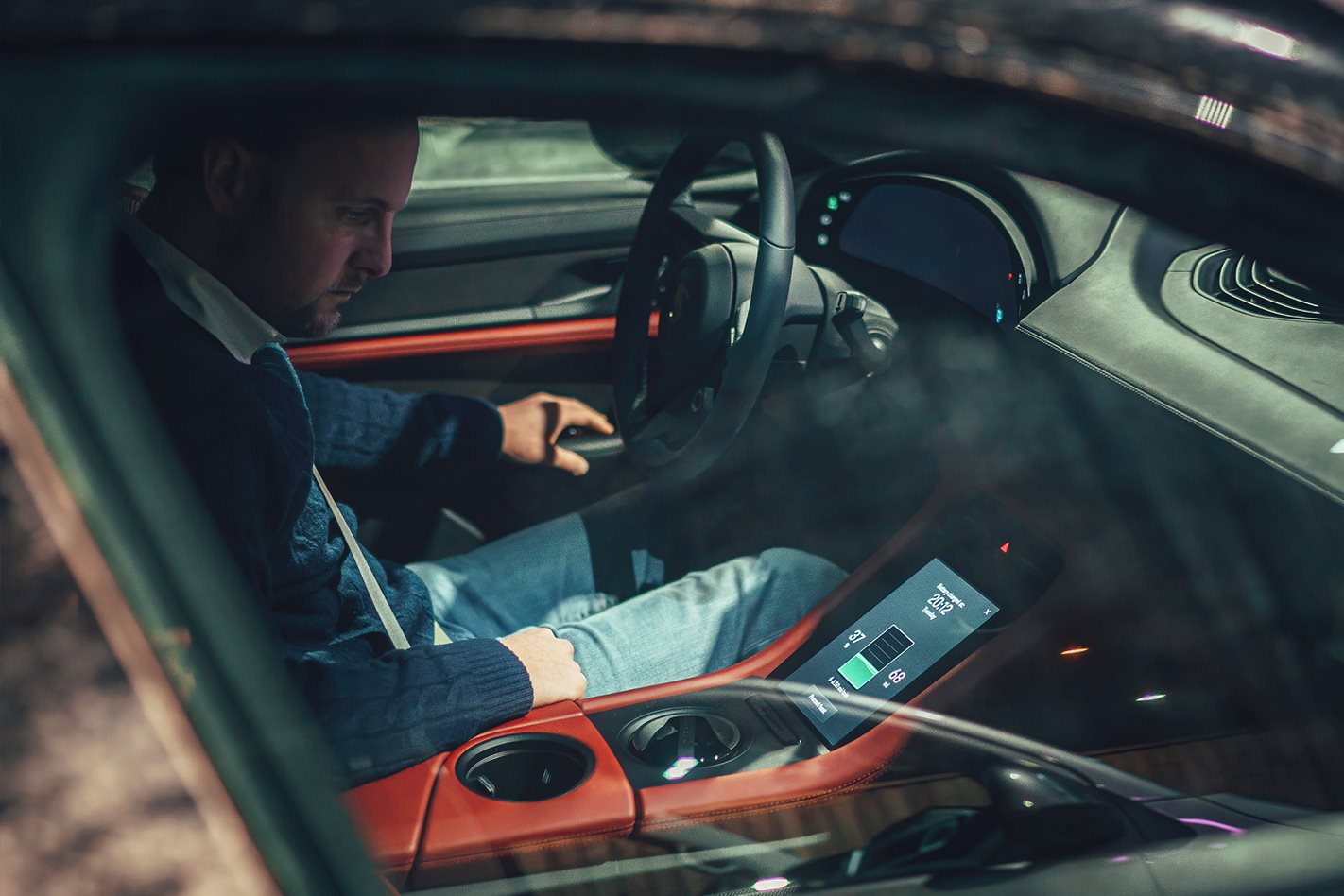 Everything else is ergonomically spot on, though, in the main. You sit nice and low, while the view ahead is clear. The slight blot on the copybook is around the rear window, whose aperture is a bit small.

Where this Cross Turismo strikes a different chord is in the ride height: as standard, the car is 20mm higher than the normal Taycan. With the optional off-road pack, the ground clearance rises to a 30mm difference. The car is on full air suspension, so it will sit lower if you want it to or automatically if it needs to from an aerodynamics point of view.

There are five settings in total. Those with a hankering to be the next Elfyn Evans will be pleased to hear there’s also a Gravel mode within the drive settings. We didn’t get to try this on our short run on paved roads, but the fact that it’s offered at least shows you where Porsche’s mindset is with this car.

Confession time: this is technically a prototype, so the final performance figures aren’t signed off on yet, which means the following are estimates. In this Turbo S guise, the car gets the Premium Battery Plus with 93.4kWh and should make 560kW and 1050Nm with overboost. The range should be similar to that of the Taycan sedan, but sadly, this range-topper isn’t slated to lob Down Under. 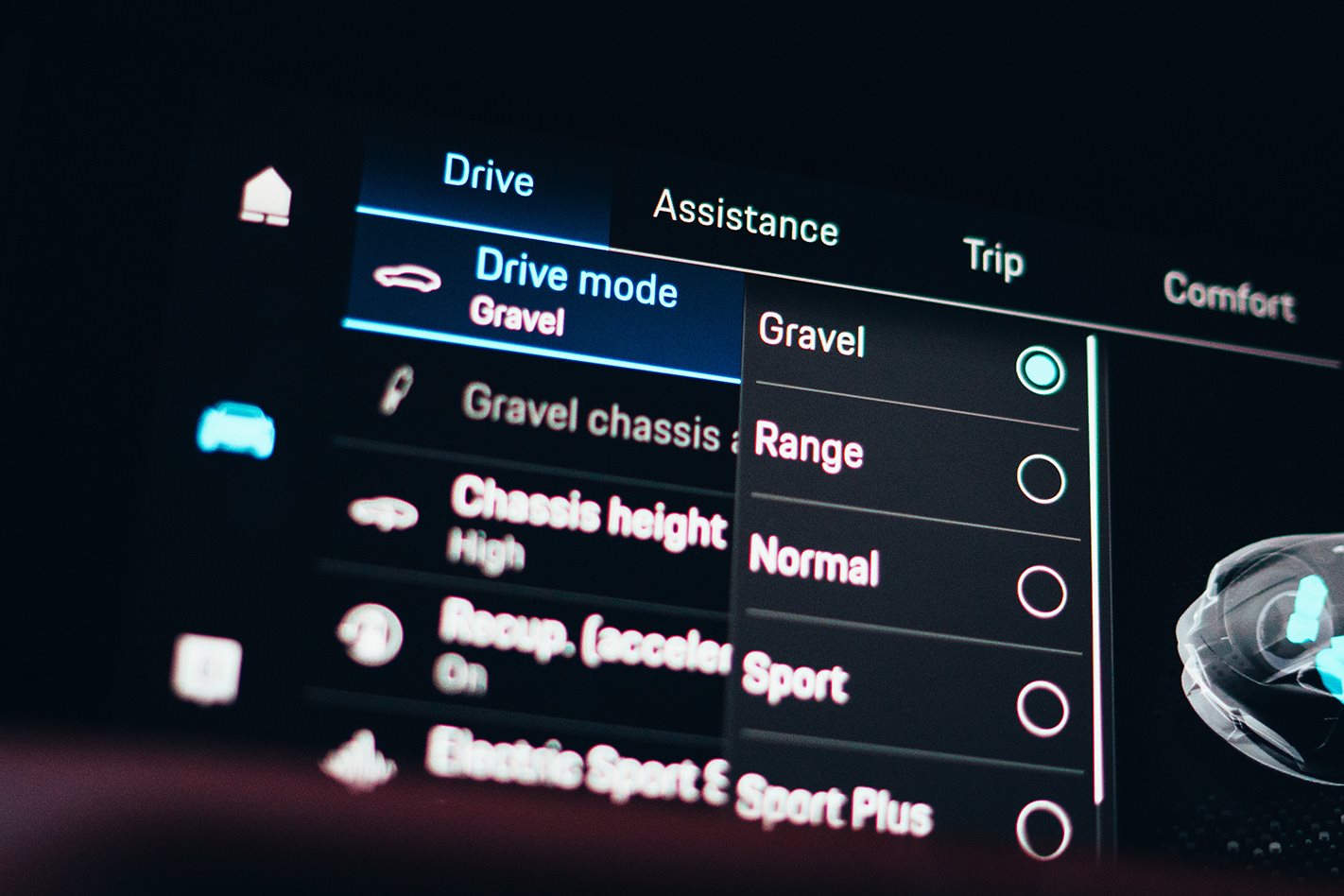 Like the Taycan, the Cross Turismo gets 800V technology and the ability to charge at up to 270kW. The rate it can hoover up electricity is still something to behold, even having witnessed it quite a few times now. It’s the sort of thing that makes electric cars, and particularly the charging of them, feel truly manageable in the real world if availability and conditions are met.
It also means you can be on your way again quickly to experience the frankly ludicrous pace of the Cross Turismo.

If you’ve read anything about the Taycan saloon, you will know that its performance is striking, and this version is no different. The Cross Turismo is four-wheel-drive as standard and gets the same two-speed rear transmission as the regular Taycan. What this means, in theory, is that 0-100km/h should take about 3.0sec (again, this hasn’t been confirmed; it’s 2.8sec on the Turbo S saloon).

For the time being, the bottom line is that my hands aren’t strong enough to hold on to the steering wheel under a full-bore acceleration run.

It’s not so much that the pace is extraordinary; it’s more the instant and seamless delivery of it. No pauses, either from the start or as the figures climb – just a relentless, sense-scrambling wave of torque. The lack of noise doesn’t make it any easier to compute, even with the Electric Sport Sound generator turned on. 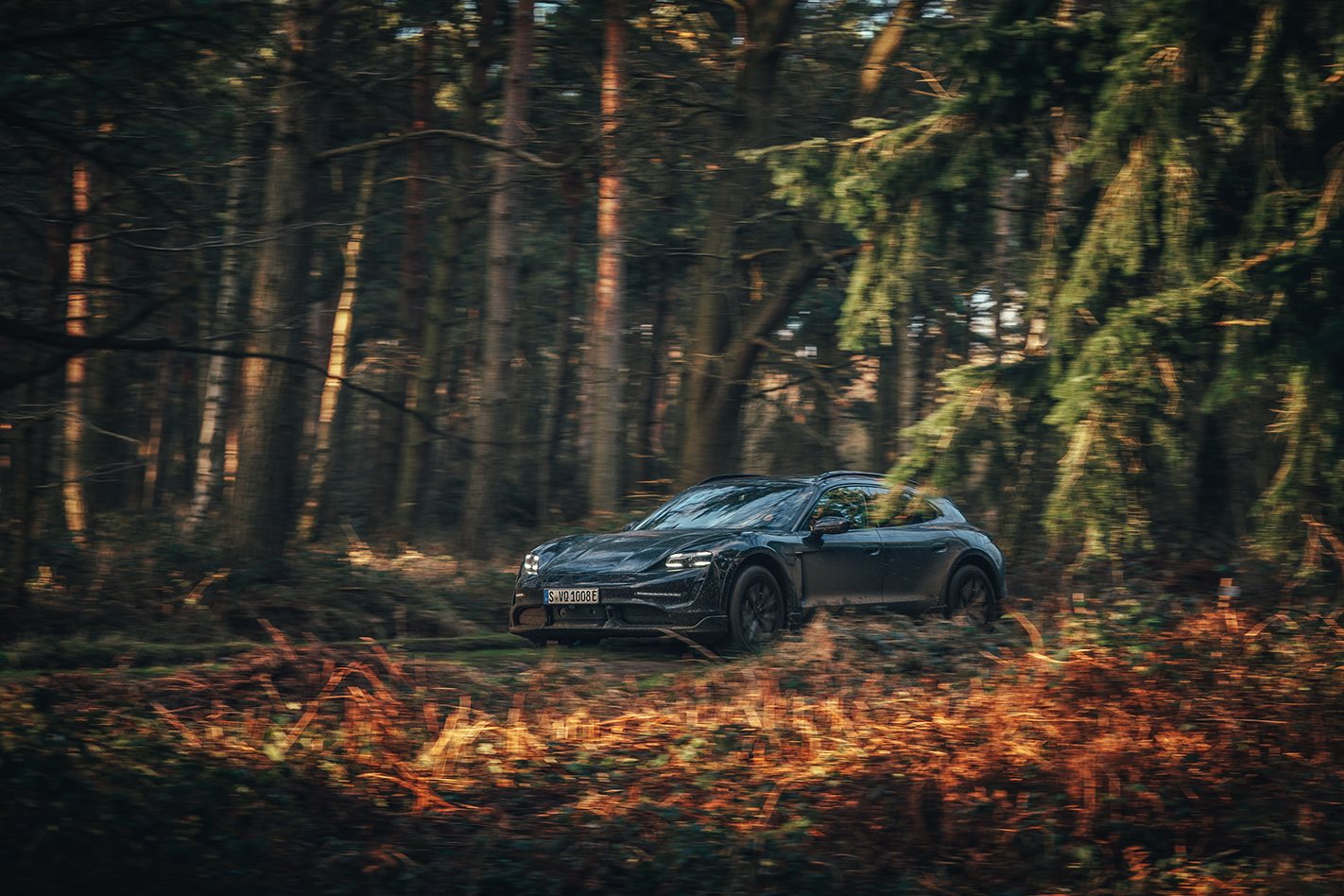 It’s a strange contradiction: your ears are saying you’re going for a relaxing Sunday drive, while your eyes and the rest of your body are screaming that Mark Webber must be behind the wheel. The suspension gets a bit busier and the trees go past faster, but the noise remains perfectly calm.

Of course, this is no different to driving other electric cars. All of them feel relentless. But it still takes some getting used to, and then some.

Once your senses have recovered, it’s also clear that this car rides extremely well. It’s so composed, in fact, that you can tell within the first 20km of driving it. The Cross Turismo runs on 235/40 R20 rear tyres and 245/45 R20 front tyres, so there’s a reasonable amount of sidewall to act as a cushion.

The way it flows across broken tarmac is really quite impressive, and only the sharpest potholes interrupt the calm in the cabin as the mass of a wheel clunks through. One caveat: our car had winter rubber. The normal Turbo S will come on 21-inch rims, so some of that flex will be lost. 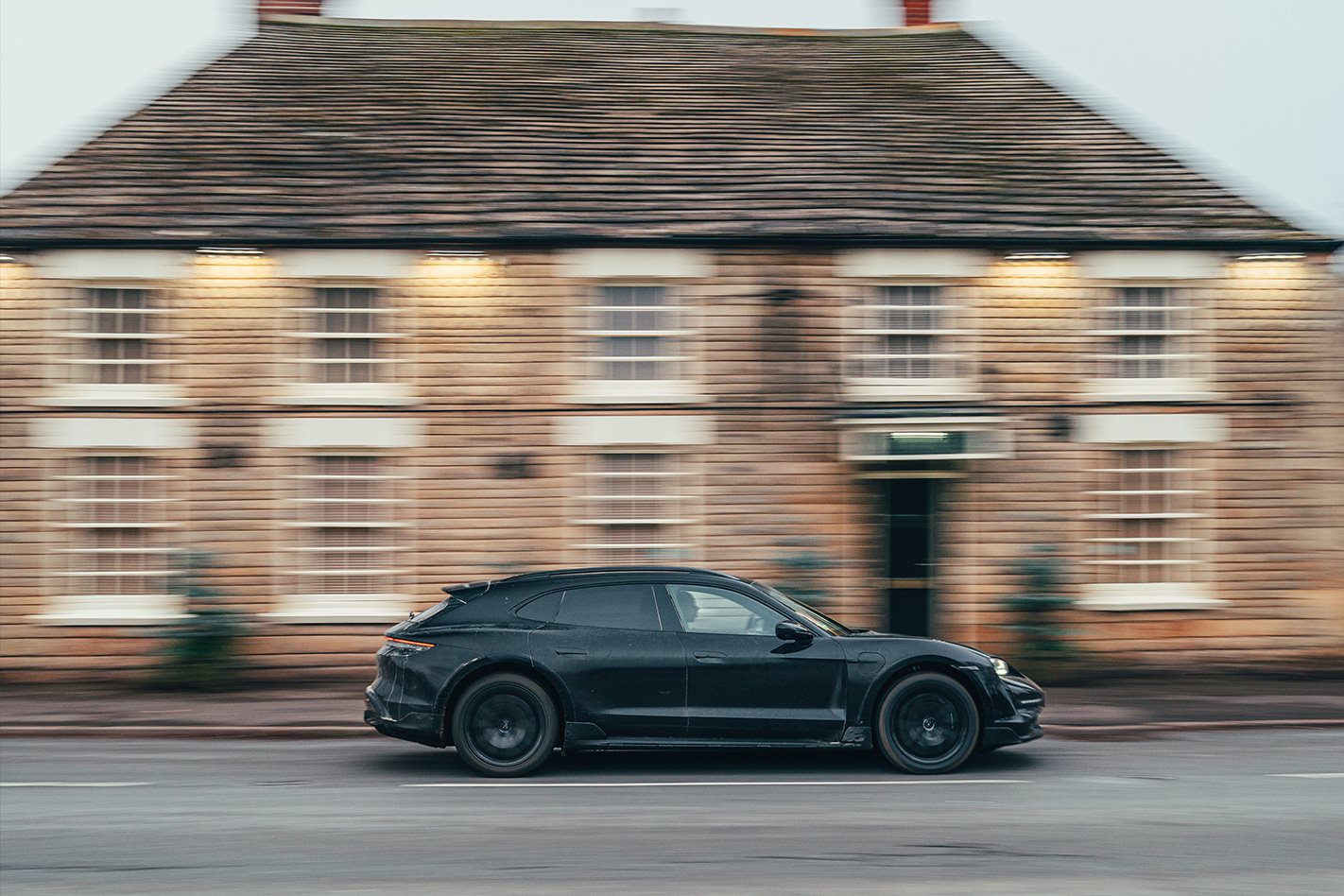 Of the suspension modes, Sport, Sport Plus and Range lower the car, but I wouldn’t bother with those settings. This Cross Turismo variant feels happiest in Normal mode, which best suits the car, not least because the middle suspension setting lets the body roll through corners slightly.

The Cross Turismo does a remarkable job of disguising its bulk, but there’s a bit more pitch here than there is in the Taycan. That’s not necessarily a bad thing, and this is still a wonderfully enjoyable car to thread through a series of bends. With a bit more movement, it only feels more exciting. The grip is impressive and the car is well balanced front to back.

In fact, ‘well balanced’ could be used to describe the whole Cross Turismo package. All the systems seem to be in harmony, so no single element gives too little or too much. Everything feels just right.

That’s pretty much the perfect way to sum up the Cross Turismo. The Taycan shifted our view on electric cars (as well as how we view Porsche performance cars heading into the future) and the Cross Turismo does a great job of following that thread. 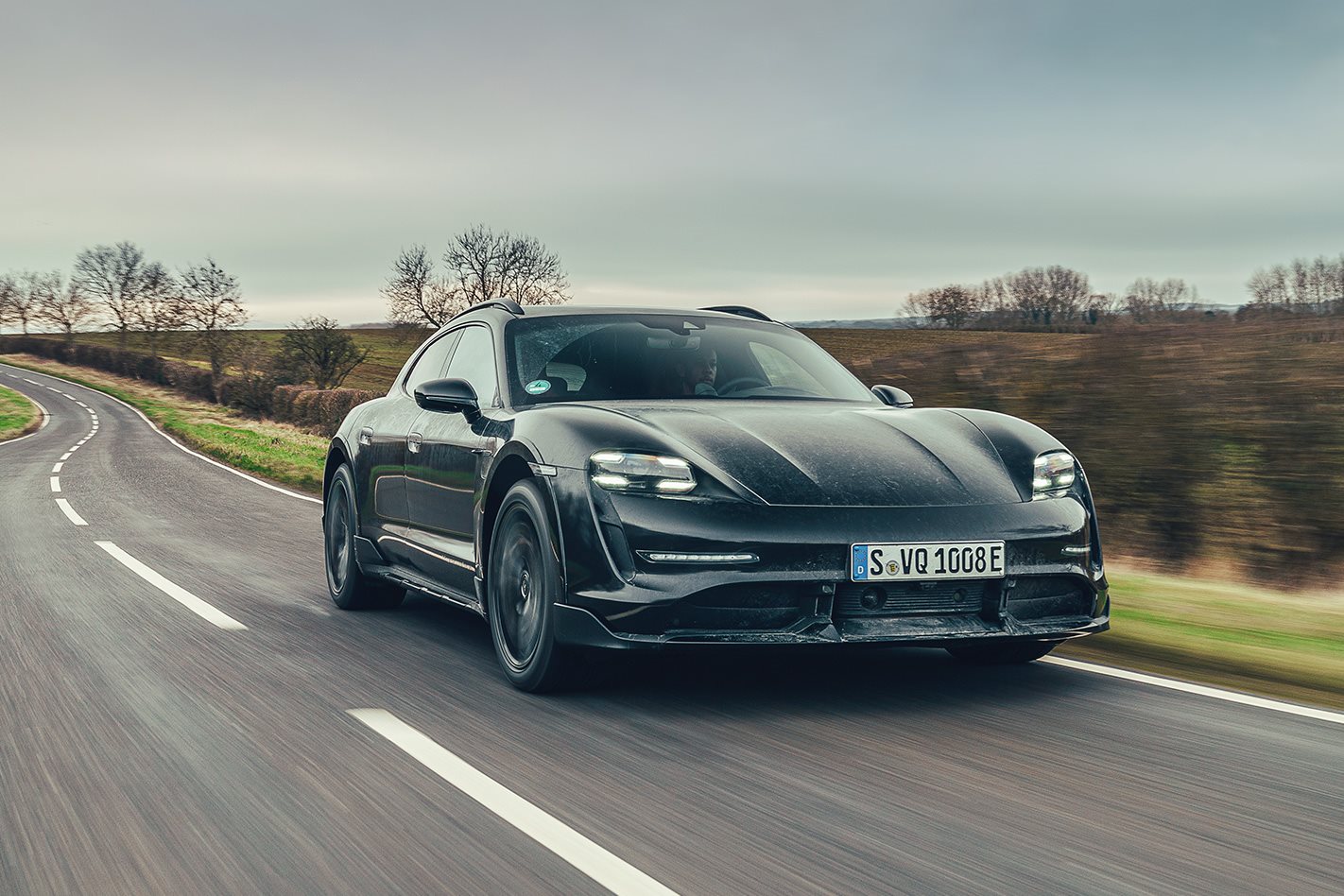 It feels different enough to warrant its place in the Porsche line-up but similar enough to uphold the already impressive Taycan badge. It’s another job well done.

Coming soon to a dealer near you

The Taycan family is about to get crowded. In addition to the sedan that earned a 4.5-star road test rating (Taycan 4S), there’s this Cross Turismo version (in 4S and Turbo guises). We’ve also seen spy shots of an upcoming Sport Turismo. For the latter, imagine the Cross being lowered and losing the cladding and you will be somewhere close.

It’s a brave move to sell two cars that are so closely matched, but as Porsche proved with the Sport Turismo Panamera, there was little cannibalisation between the two, so the firm is happy with the strategy. The global sales split is 70/30 in favour of the sedan over the Sport Turismo, and Porsche is anticipating a similar trend with the two Taycan variants that are so far confirmed.

While European markets will get the choice of four Taycan Cross Turismo variants, Porsche has rationalised the lineup for Australia, declining the entry-level Cross Turismo 4 and the range-topping Turbo S. That leaves the two models in the middle of the sandwich for Aussie buyers: the Cross Turismo 4S and the Turbo, both naturally driving all four wheels.

The Turbo is priced from $271,200 before on-road costs locally, which only adds a couple of grand to the price of the equivalent Taycan sedan. This leverages the power of 460kW electric motors, lifting to 500kW/850Nm when using launch control or transient overboost. This shaves the 0-100km/h time down to a mere 3.3 seconds, while the WLTP range eases out fractionally to 395-452km. 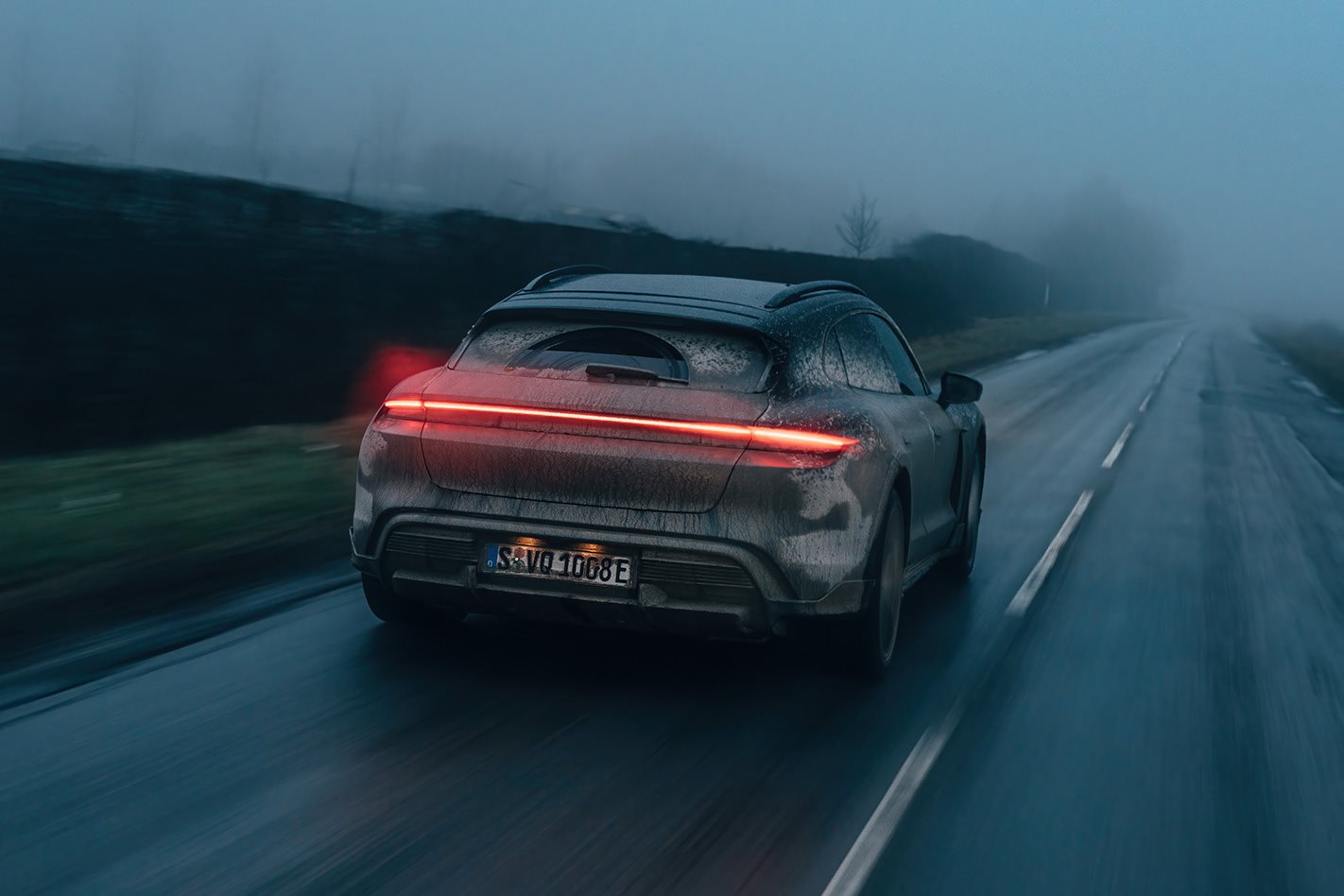 Other differences? The 4S gets 360mm front and 358mm rear iron brake discs as standard, while the Turbo gets gleaming tungsten-carbide-plated rotors measuring 410mm up front and 365mm out back.

You may well need to break out the tape measure to check whether a Cross Turismo will fit in your garage. The Turbo model is 4974mm long, 1967mm wide and 1412mm tall, and runs on a 2904mm wheelbase. Compared to the already generously proportioned sedan, it’s – 11mm longer, 1mm wider, 31mm higher. The wheelbase is also 4mm longer.

As with the Taycan sedan, the Cross Turismo is a four-seater as standard with an optional fifth seat available. Due to its glass roof and elevated roofline, the Cross Turismo also offers superior front and rear headroom as well as more space in the rear. The 4S features 446 litres of boot space, rising to 1212 litres with the seats folded. That’s on top of 84 litres in the frunk.

The order book is open, so expect Oz deliveries to start in quarter three of this year.

Louis Vuitton – Does Macy’s Need To Be The World’s Largest Store?