Many people argue that Porsche cars are best when it comes to handling. There is no doubt that the Porsche cars are one of the best-engineered sports cars that you can buy. They are known to break the Nurburgring lap time more than one time. They also manufactured one of the supercars that joined the Holy Trinity. It was the Porsche 918 Spyder. Supercar sitings in India are rare as not many owners bring them in broad daylight because of the chaos that happens on our Indian roads and because of the condition of our Indian roads. Here is a video of a Porsche 911 Turbo being delivered to a customer. The video has been uploaded on YouTube by CS12 Vlogs.

The video is shot at the Elite Supercars India located in Mumbai. The 911 Turbo S in the video is pre-owned but it still costed Rs. 3 Crores as per the video. The supercar in the video is finished in Silver with two striped going through the between. At the front, there are the typical 911 headlamps with dual projectors placed vertically. It is a coupe so it only gets two doors, but there are 4 seats. Although, it is highly unlikely that anybody would be able to fit in the rear seats. The interior of the supercar here is finished in red. The upholstery, seats, steering, gear lever and even the floor mats are finished in red.

The Turbo S is a more powerful version of the 911 Turbo. The one we see in the video is a 2014 model which means it produces 560 PS of max power and a peak torque output of 700 Nm. These massive numbers are produced by a 3.8-liter flat-six engine that is twin-turbocharged. It is mated to a 7-speed PDK Dual-Clutch automatic gearbox which is one of the fastest shifting gearboxes currently available. The supercar can hit a ton in just 3.1 seconds and it has a top speed of 318 kmph. 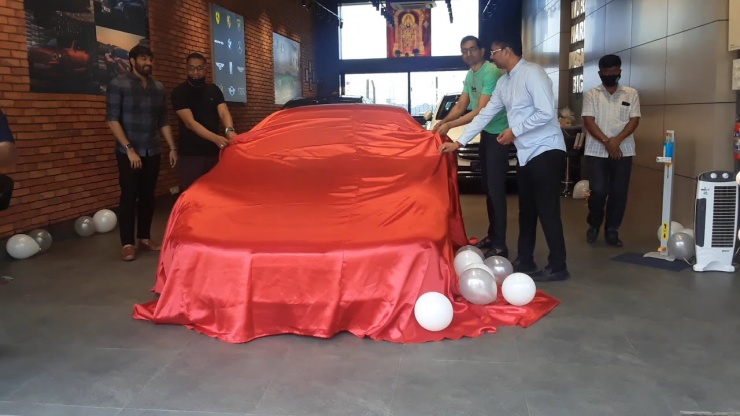 The 911 Turbo S tips the scale at 1,627 kgs. The wheel sizes measure a massive 20-inches which might make the ride quality a bit rough considering there is not enough tyre sidewall. However, the wheels get centre lock wheels instead of traditional hub locks. The advantage of having these is that it is much faster to take off when you are on a track. However, they do need a special tool to take off the wheel.

Porsche also offers four-wheel steering. It makes the rear wheels move in the same direction as the front ones when going on high speeds. This effectively makes the wheelbase longer and increases stability. At low speeds, the rear wheels move in the opposite direction of the front wheels, this effectively shortens the wheelbase and helps in making tight u-turns. So, there is a less chance for you to make three point turn because the turning circle of the vehicle is reduced. Braking duties are done by discs at all the four wheels. Also, Porsche offers carbon ceramic discs which are significantly more resistant to brake fade due to heat. There are not many 911 Turbo S available in India. One other person that we know who owns a Turbo S is the legendary cricketer, Sachin Tendulkar. You can click here to read more about it.