Former Goldman Sachs manager, Bitcoin billionaire and the CEO of Galaxy Digital, Mike Novogratz has taken to Twitter to say that he does not believe in the bright future of Litecoins and prefers DeFi projects to it.

Novogratz responded to a tweet by Alex Saunders, founder of Nuggets News, who believes that as exchanges have started delisting privacy coins (Bittrex has announced delisting Monero, Zcash and Dash), as well as XRP, Litecoin has good chances to recapture the top 3 position that it held once.

CEO of Galaxy Digital shared his doubts about Litecoin being able to increase its adoption, since it does not have the necessary properties for it.

Therefore, Novogratz prefers to spend time on DeFi projects and he is long on Bitcoin and Ethereum. 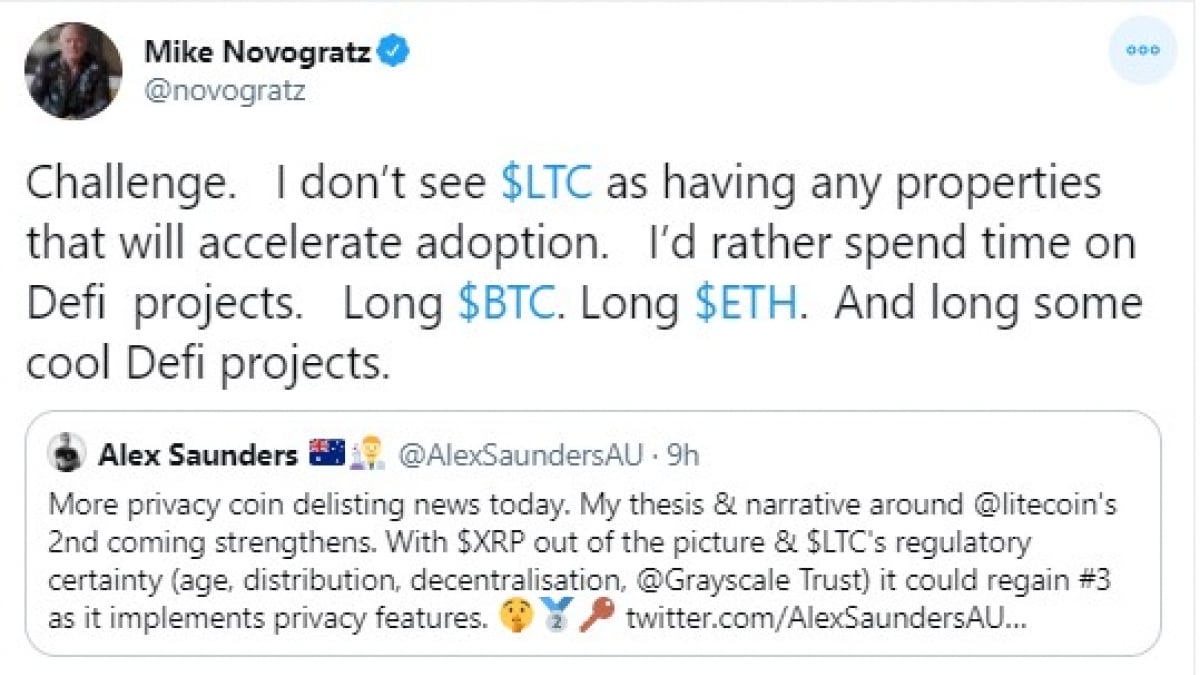 Saunders also reckons that Litecoin will be able to climb to top-3 spot, since it’s got regulatory certainty and plans to introduce an update with privacy features this year.

Besides, it has support from Grayscale (Grayscale Litecoin Trust) and Coinbase (which has announced its plans to delist XRP but still has been sued by the SEC for collecting commission fees from “illegal XRP sales”).

Earlier, Novogratz referred to Litecoin as a direct attack on Bitcoin, saying that LTC is not faster than BTC and that it is not digital silver to BTC’s digital gold.

“Strange that the SEC took so long to sue Ripple”, Mike Novogratz

After the SEC officially pressed charges against Ripple on December 21, accusing it of selling unregistered securities (XRP) to investors, Novogratz took to Twitter to say that he thought it was strange that Jay Clayton (now former SEC chairman) had taken so long to sue Ripple.

Unlike XRP, Novogratz wrote, Bitcoin and Ethereum do have “an SEC pass” as they have been confirmed by the regulator not to be securities.

Mortgage – Our view: Eviction hiatus is good, but what about mortgages? | Editorials

Litecoin – Litecoin and Chainlink May Flip Cardano Soon, Will XRP Be Under Threat?