Loans – Pricing of Intercompany Loans or Debt Versus Equity?

Home » Loans – Pricing of Intercompany Loans or Debt Versus Equity?

Loans – Pricing of Intercompany Loans or Debt Versus Equity?

The OECD guidance provides a lengthy discussion on the evaluation of an appropriate credit spread. Even if a consensus is reached on the difficult issue with respect to the credit rating, being able to translate this letter-grade credit rating into a numerical credit spread requires reliable and timely data on credit spreads. We shall explore certain considerations with respect to the debt-versus-equity issue as well as potential pricing issues in a recent UK. litigation and four previous U.S. cases.

The taxpayer prevailed in BlackRock HoldCo 5 LLC v. The Commissioners for Her Majesty’s Revenue and Customs (HMRC) on Nov. 3, 2020, in a litigation where HMRC attempted to deny intercompany interest deductions of nearly $200 million per year.

BlackRock agreed to pay $13.5 billion to acquire Barclays’ investment management business in 2009. Part of the financing of this acquisition involved a $4 billion intercompany loan, which was structured by tax advisers from Ernst & Young. The structure involved several affiliates and was referred to as U.S./UK. sandwich. The intent was to have in the United Kingdom an interest rate deduction that was not recognized as U.S. taxable income. This type of hybrid mismatch was a key issue in the OECD’s Base Erosion and Profit Shifting (BEPS) Action Plan 2.

The intercompany loan involved four tranches with different maturities and different interest rates. We shall pose a simple version of an intercompany loan that roughly captures this more-involved loan structure. Let’s assume an interest loan with the following features:

As the litigation was over whether to deny the entire intercompany deduction, the expert witnesses focused not on the arm’s-length interest rate but rather on how the intercompany loan should have been structured. In particular, both experts noted that third-party lenders may have required protective covenants in exchange for a reasonable interest rate.

The experts disagreed as to whether a third-party borrower would have accepted such covenants. The taxpayer’s expert argued that a third-party borrower would have accepted covenants even though they limit the financial flexibility for the borrower. The tax authority’s expert disagreed, arguing that these covenants would be too complex and costly to the borrower, even though BlackRock had agreed to similar covenants in its third-party revolving credit facility. For third-party loans, a lack of covenants places the lender at greater risk of default. Multinationals that wish to charge their related-party borrowers higher intercompany interest rates have argued that a lack of covenants for the intercompany loan suggests a lower credit rating and hence a higher interest rate under arm’s-length pricing.

The intercompany loan in the BlackRock litigation was similar to that in Chevron Australia Holdings Pty Ltd v. Commissioner of Taxation, where the loan did not have covenants. The Australian Tax Office (ATO) only argued the pricing issue, insisting that the 4.14% loan margin should be lowered to 1.44%. The Chevron representatives argued an “orphan theory” where the intercompany debt was seen as subordinated debt. The Australian court rejected this approach, arguing that third-party lenders would have relied on implicit support from the parent corporation. The ATO position was that the appropriate credit rating was BBB.

This argument for high credit spreads is often challenged by tax authorities for reasons noted in the OECD transfer pricing guidelines on financial transactions under paragraphs 10.62 to 10.86. Paragraph 10.86 states:

“There may be less information asymmetry between entities (that is, better visibility) in the intragroup context than in situations involving unrelated parties. Intra-group lenders may choose not to have covenants on loans to associated enterprises, partly because they are less likely to suffer information asymmetry and because it is less likely that one part of an MNE group would seek to take the same kind of action as an independent lender in the event of a covenant breach, nor would it usually seek to impose the same kind of restrictions.”

The taxpayer’s expert argued that no guarantee was needed because of the implicit support of the parent company. The OECD’s transfer pricing guidance on financial transactions notes the role of implicit support. The intercompany loans’ lack of covenants was not seen as a reason to disregard the intercompany loans by this court decision but they may not have been an excuse to argue for a high credit spread.

Interest rates during November 1999 were approximately as follows:

One might wonder why the IRS argued for a lower credit rating. As the court noted:

“Respondent argues, relying on his expert Mr. Mudge, that NAGP would have likely been rated below investment grade by an independent rating agency such as Standard & Poor’s (S&P), and that this establishes NAGP was thinly capitalized.”

The intercompany debt for the Dutch affiliate was $4 billion issued on Sept. 1, 1996. The interest rate was initially set at the greater of (1) the six-month LIBOR (London Interbank Offered Rate) on the relevant date plus 2.3% or (2) 7.5%. After the fall of short-term interest rates during the 2001 recession, the terms were amended to eliminate the 7.5% minimum. The six-month LIBOR over this period averaged 4.24%, which meant that the intercompany interest rate averaged 6.54%. The six-month Treasury bill rate averaged 3.76% over this period, which means the average six-month TED spread was 0.48% and the average credit spread was 2.78%.

This credit spread would be seen as reasonable if the Dutch affiliate’s credit rating were BB. The credit rating for the parent company was A, which would suggest that the Dutch tax authority could have challenged this intercompany interest rate if an implicit support argument suggested a higher credit rating than BB for the borrowing affiliate.

“The company’s Bermuda parent company loaned billions of dollars to its U.S. subsidiary. The U.S. subsidiary then paid back the loan, with interest, creating profits in tax-free Bermuda for the parent company and tax-deductible interest for the U.S. company. The money was routed through Luxembourg, Hungary and Barbados. The U.S. has tax treaties with each of those countries, exempting loan repayments coming from the U.S. The IRS said it wants to treat the payments as if they were made directly to Bermuda, rather than routed through treaty countries. That means the payments would be subject to a 30 percent tax.” (Portillo, IRS Fights Ingersoll-Rand Over Offshore Money Routing, Charlotte Observer (Sept. 27, 2014))

Tyco is challenging a $1 billion tax bill assessed by the IRS based on its view that cash transfers carried out within the multinational company were not debt payments, but taxable dividends, according to U.S. Tax Court documents. (Temple-West, IRS Takes on Tyco in U.S. Tax Court Debt-vs-Equity Dispute, Reuters (Aug. 7, 2013))

The IRS also tried to use Section 385 to recast the intercompany loans of Ingersoll-Rand as equity. During 2002, the various foreign affiliates of Ingersoll-Rand loaned its U.S. affiliate $8.9 billion. These intercompany loans had 10-year terms with a fixed interest rate equal to 11%. Interest rates on 10-year U.S. government bonds during the first half of 2002 varied from 4.75% to 5.45%, averaging 5.1% during this period. The 11% intercompany rate was consistent with a credit spread in excess of 5.5%.

Table 1 presents key information on Ingersoll-Rand’s corporate bond offerings since 2014 including the date of the bond offering, the term to maturity, and the interest rate. All corporate bonds were denominated in U.S. dollars. Table 1 also shows the corresponding U.S. government bond (GB) rate and the credit spread for each bond offering. These spreads average approximately 1.1%, which is indicative of a credit rating of A. 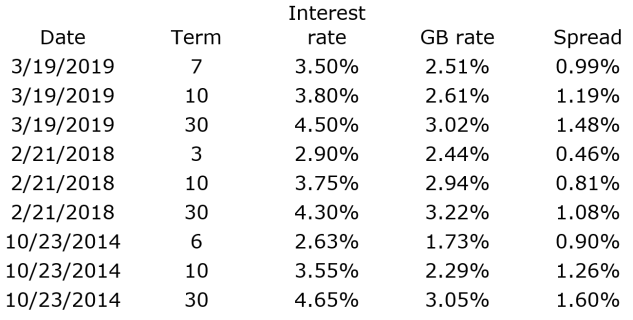 Of course, the credit rating back in 2002 may have differed and the credit rating of an affiliate may differ from that of the overall corporation. Given the more than 5.5% credit spread implied by the 11% intercompany interest rate, it is reasonable to believe the IRS could have challenged the arm’s-length nature of such a high interest rate.

The Tyco petitions to the Tax Court show that there were several intercompany loans at issue. We shall focus on the intercompany loans issued on Oct. 1, 1998, March 31, 1999, and Aug. 12, 1999. On each date, there were several fixed-interest-rate loans with varying maturities. Table 2 presents the key information on these loans. The implied credit spread equals the difference between the intercompany interest rate and the interest rate on the corresponding government bond. 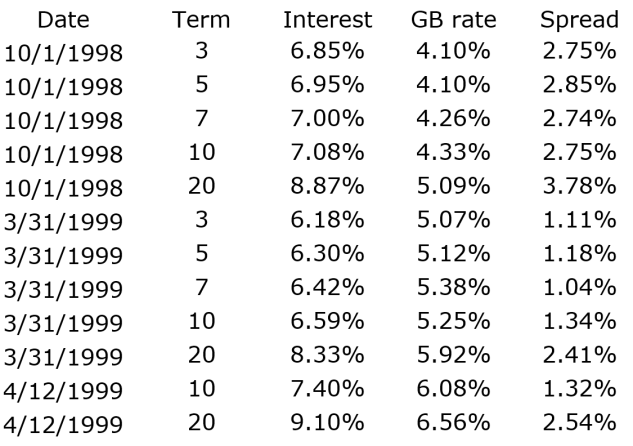 The OECD transfer pricing guidance on financial transactions discusses both debt-versus-equity issues as well as the pricing of intercompany loans. We have noted several IRS attempts to reclassify intercompany debt as equity in order to deny intercompany deductions. In many cases, the IRS does not succeed in recharacterizing debt as equity.

The two celebrated corporate inversion cases where debt-versus-equity concerns were raised involved intercompany loan rates well above the interest rates on the corresponding government bond rates. If the IRS could have argued that the appropriate credit rating for the borrower affiliate was investment grade, a case could be made that the intercompany interest rate exceeded the arm’s-length rate.

HMRC challenged the intercompany financing in the BlackRock litigation hoping to reclassify debt as equity in order to eliminate approximately $200 million per year in interest deductions. While this challenge failed, the intercompany interest rate was lowered such that the intercompany deduction was lowered to approximately $140 million. It is instructive that the taxpayer’s argument for debt rather than equity classification included an acceptance of the implicit support position in prior litigations. This position supports an argument for a high credit rating for the borrower affiliate, which would imply a lower arm’s-length interest rate.

This column doesn’t necessarily reflect the opinion of The Bureau of National Affairs Inc. or its owners.

Harold McClure has been involved in transfer pricing as an economist for 25 years.

Suspect Arrested In Walgreens Holdup May Be Linked To Other Robberies