MANILA, Philippines — Senator Richard Gordon on Friday questioned the luxury cars allegedly purchased by top officials of Pharmally Pharmaceutical Corp., the firm that bagged over P8.6 billion worth of government supply contracts in 2020.

During the resumption of the blue ribbon committee’s investigation into the government’s pandemic purchases, Gordon presented slides showing the model and price of vehicles supposedly owned by three Pharmally executives.

Gordon claimed said vehicles were purchased months after the firm was awarded the government contracts.

The vehicle’s last registration date with the Land Transportation Office (LTO) is May 7, 2021, he noted.

Dargani’s 27-year-old sister, Twinkle, another official of Pharmally, has a P13-million Lamborghini Urus registered to her name, according to Gordon, citing LTO records. 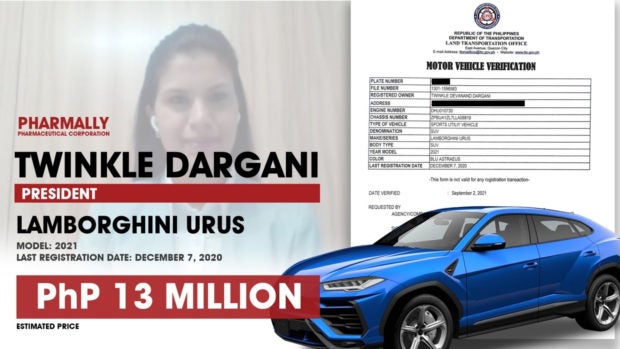 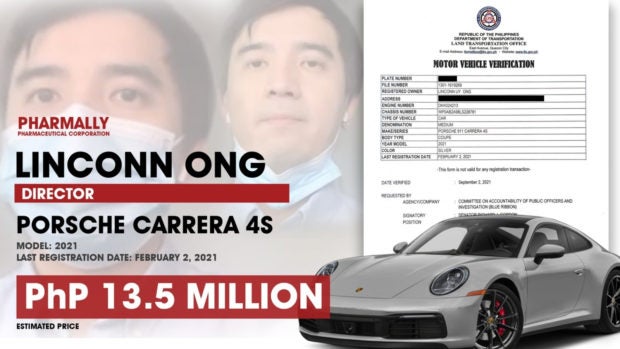 The Senate blue ribbon committee, led by Gordon, is currently investigating the P8.6-billion government deals awarded by the Procurement Service-Department of Budget and Management to Pharmally in 2020 despite the firm being only several months old with just P625,000 in paid-up capital.

It was eventually disclosed during the Senate probe that Pharmally had borrowed money from former presidential adviser Michael Yang to help them fulfill some of the government’s orders last year.

Yang, for his part, maintained he has no ties with Pharmally and only introduced the company to Chinese suppliers.

Pharmally’s money borrowing, senators said, was an indication that it had no financial capacity to be given such government procurement contracts.

READ: Pharmally exec: All our business dealings are aboveboard

Pharmally chairman and president Huang Tzu Yen, however, has previously denied they were favored in any way in the government’s procurement of medical supplies in 2020, saying the firm has been “unfairly prejudged.”