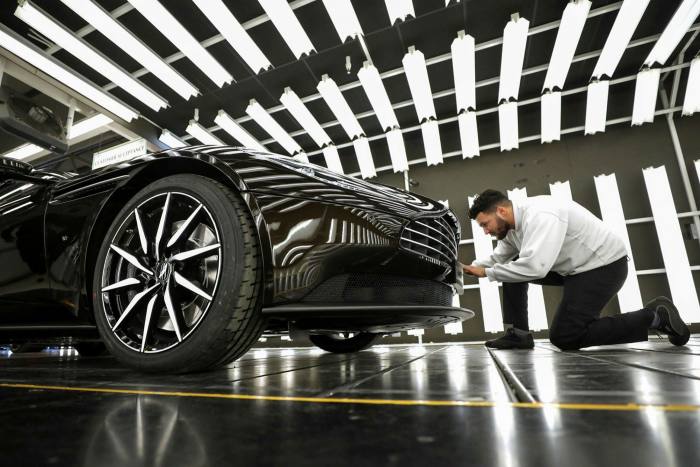 But it also plans to expand its range of hybrid and electric cars over the next four years.

A hybrid version of the DBX, Aston’s first sport utility vehicle, is due later this year, with more types of hybrids from 2023, and its first battery-only models from 2025.

“We are way ahead of our rivals, and all because of our partnership with Mercedes,” Stroll said.

Ferrari has committed to making battery models by 2030, while McLaren and VW-owned Lamborghini have not set timelines. Though Bentley, also owned by VW, is planning a battery car for the middle of the decade.

We’re already sold out until September on the sports cars, and until July on the DBX

Aston has yet to decide whether to use the DB moniker on its electric models, Stroll added. “We will have a front engine version of a DB11/Vantage, and an SUV higher four wheel drive one, but we don’t know the names yet,” he said, adding the designs are not yet finalised.

Mercedes, which supplies some of Aston’s engines and technology, may provide batteries, he added. “We’re looking at all options”.

Stroll is hopeful that the 108-year-old brand will help the company remain relevant when it is unable to market cars on their purring engine tones.

Every carmaker will be able to produce electric vehicles he said, but Astons will have “our beautiful body, our suspension, our vehicle dynamics, our bespoke interiors”.

Stroll, who made his fortune moving brands such as Tommy Hilfiger, Michael Kors and Ralph Lauren upmarket, aims to restore the luxury credentials of the company that has struggled financially since an ill-fated IPO in 2018.

A policy of emptying dealerships of excess stock cost the company millions last year, pushing it to a loss even before the pandemic, but means that the business will in future only make cars that have a buyer lined up, he said.

“By showing a little bit the first signs of scarcity, we’re already seeing results,” he said. “We’re already sold out until September on the sports cars, and until July on the DBX.”

Last week, he unveiled the racing car to be used by the new Aston Martin F1 team, which he believes will further boost the brand.

“80 per cent of people who watch F1 buy a high performance car at various price points,” he said. “And of the 23 countries where there are races, we have dealers in 20.”

Personal Finances News – Here’s who may not qualify for a third stimulus check. The latest update

Luxury SUV – The Weirdest American SUV Ever? What You Need To Know About The SCG Boot

Personal Finances News - Here's who may not qualify for a third stimulus check. The latest update