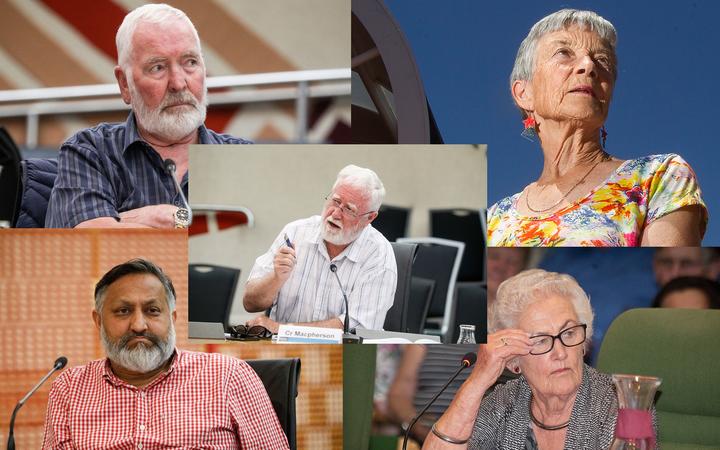 However, Macpherson says it was wrong for “a little power bloc in RDRR to reset directions” and he hopes for reconciliation.

Another committee member, Lachlan McKenzie, has also resigned from the group. Raj Kumar, has also left the group, saying he had different aspirations and the time had come to “do something different”.

Speaking to Local Democracy Reporting on Tuesday, councillor Peter Bentley said five members met “a couple of weeks ago” to discuss concerns about the direction of the group. As a result, those members contacted Macpherson to meet and discuss the issues.

Bentley said they received what in his opinion was a ”rather nasty reply from Reynold full of vitriol and name-calling which I certainly didn’t appreciate”.

Bentley confirmed his resignation on Tuesday.

“I still think there’s a place, a requirement, in this town for a ratepayer group. However, the negativity that has arisen around RDRR at the moment is not the direction I wish to go in.”

Bentley said Macpherson had a had an “inability to recognise the positive aspects of council, of which there are many”.

He said Macpherson’s contentious social media post last week claiming a sewage spill in Ngongotahā was due to poor maintenance was a final straw.

“I thought that the least we could do as a group would be to acknowledge the efficiency and effectiveness that [council infrastructure manager Stavros Michael’s] team had undertaken. A positive news story about the council would have done RDRR no harm at all.

“There’s nothing wrong with bestowing praise on a person rather than criticism. If all you can do in life is criticise people, it’s a pretty sad life.”

Bentley said in his view the discontent with Macpherson, who was voted chairman of the 700-member group in February, had been “building up for quite some time” and described it as a “general feeling of disquiet”.

“It’s kind of sad. We had some wonderful memories and I learned a lot from Reynold and others.”

Bentley said apart from Macpherson’s alleged behaviour there was no other problem with the group in his opinion.

Bentley said in his opinion: “Reynold’s fallen into a trap with regards to his thoughts and actions around the mayor. He’s like the dog that barks at every passing car. Pick your fights. Reynold’s Reynold, he’s very very intelligent. He’s perhaps a little verbose at times which rubs people up the wrong way but he’s got a passion for residents and ratepayers that I think is commendable.

“It is salvageable, but I think at the moment with Reynold being elected councillor and a chair of a ratepayer’s group is a conflict of interest that is not tolerable.

Bentley said in his view: ”You can’t be one and the other. When he’s talking he’s got to be very clear that he’s talking as a councillor or as a ratepayer group [chair] and I think it’s too close.

“He’s got his heart in the right place but I think it’s just a little bit too much fixated on one or two individuals within council.

“RDRR has taught me a lot. I’ve accumulated a lot of knowledge, I’ve met some wonderful people. There’s a lot of concerned ratepayers who are not members of RDRR but are concerned with the direction Rotorua’s going in, or being pushed to.”

Former RDRR member Paddi Hodgkiss confirmed she had “definitely” resigned from the group.

She said, in her view, her reasons were Macpherson’s “need for power and control” and “his perceived ownership of RDRR”.

She said, in her opinion, the email Macpherson sent to the group was “horrendous written abuse” and said it attacked their integrity and loyalty.

“It’s the kind of email you want to delete immediately.”

Councillor Raj Kumar confirmed he had also left the group, resigning on Monday.

He said he had different aspirations and the time had come to “do something different”.

“You have to listen to what the people are saying as well.

He said his resignation was not because of the alleged behaviour of Macpherson.

“Reynold is a man of his own convictions. He believes in freedom of speech… he doesn’t want to play games.”

Former RDRR chairwoman and founder of the group Glenys Searancke she had also resigned from the group “mainly [because of] personal reasons”.

She said there had been some personality clashes in the group and it needed new blood going forward.

Searancke said the group was “not quite the same” as when she helped found it.

“The group needs to be positive and needs to come up with new ideas, not criticise all the time.

Emails between the group and Macpherson have been obtained by Local Democracy Reporting.

His email was in response to a request from the group to meet with him to discuss five issues – the future and direction of the group, leadership and conflict of interest, relationship with the media, perceived negativity and backlash and mayoralty considerations.

In the email, Macpherson called the group a “wannabe internal power bloc”

“This crude invitation has hugely undermined my confidence in your integrity. It violated all the principles used to establish, grow and defend the RDRR.

“Right now I am under siege from yet another alleged Code of Conduct violation intended to bully me into silence, in addition to another being processed. I don’t have time or inclination to spend on this pretend coup.”

Kumar replied in an email, saying respect was “earned, not given”.

“Instead of listening to the concerns and the aggrieved voices you fire a retaliatory shot suggesting a power bloc.

“One Rotorua for all. No negativity, no personal slagging.”

In another email, Hodgkiss responded to Macpherson and other RDRR committee members on behalf of the group of five stating there had been “disquiet”.

“Five members of the committee had a brainstorming session and invited Reynold to discuss key issues raised, an invitation he refused.

“The written response we received was an abusive, vitriolic tirade attacking our integrity and loyalty such that it leaves us with no choice but to move away from our involvement with RDRR.”

On Tuesday, Rotorua mayor Steve Chadwick told Local Democracy Reporting if Bentley and Kumar had made a “principled decision, then well done”.

She said the resignations were “interesting” but she wasn’t personally aware of internal RDRR ructions.

“I enjoy my interactions with councillors Bentley and Kumar.”

Asked if she enjoyed her interactions with Macpherson, Chadwick said “no”.

“But sometimes some very good points come across and I will always respect that. He has never been disrespectful to my face. Social media I don’t enjoy.”

She said she had not yet decided if she will make a formal code of conduct complaint against Macpherson regarding his post about the Ngongotahā wastewater leak.

“However, I acknowledge my colleague Councillor Bentley concurring with the council’s record of the real reason for the wastewater main break at Ngongotahā. That is appreciated.”

On Tuesday afternoon, Macpherson responded, saying he was “appalled” by the resignations.

“They are all fine people who have displayed loyal service to the residents and ratepayers over many years. RDRR now has nearly 700 members, associates and friends. It is crucial that it continues with its democratic constitution.

“The email confirming concerns arrived when I was managing RDRR without much support and under attack from political opponents. It was offensively blunt. I replied in like terms but without any name-calling. My main points, more politely stated, were seven simple truths.

“It is wrong for a little power bloc in RDRR to reset directions. It is time to separate leadership roles and refine management services… Perceptions of negativity are inevitable when the ruling regime is challenged but must be better balanced with positive proposals.

He said the group had grown by “contesting the mayor’s agenda”.

“Personal ambitions must respect our democratic candidate endorsement system. RDRR must continue to build its services to members.

“On balance, Peter Bentley is probably right. Having aired our dirty washing in public, my hope now is that these wonderful people and I can suspend the resignations, accommodate legitimate differences, reorganise leadership services and negotiate fairer workloads, and get on with building our political services to ratepayers.”

Local Democracy Reporting is a public interest news service supported by RNZ, the News Publishers’ Association and NZ On Air.

Luxury Cars – 10 Best Cars On The Show, Ranked By price