WHAT’S THE POINT of a high performance car if you only ever drive it slowly?

I’m gazing down at the mode dial of this Bentley Continental GT V8, feeling a pang of guilt that for 90 per cent of this drive it’s been switched into its tamest Comfort setting.

It’s not that I’m particularly intimidated by the 404kW and 770Nm generated by the twin-turbo V8 up front, more that flinging a 2143kg extension of the Garrick Club at a corner seems faintly unseemly.

At this juncture, it’s worth mentioning that the eight-pot Conti has been around for a little while, arriving here in 2020. It’s always been a little overshadowed by its senior W12-engined sibling, and given that Bentley’s one of only five manufacturers who’ll sell a 12-cylinder engine in Australia – along with Aston Martin, Ferrari, Lamborghini and Rolls-Royce – there’s a certain cachet in joining that exclusive Anglo-Italian club.

But should you? This brings us back to our initial question. There’s no doubt that if the asking price is a peripheral concern and you prefer to waft along on a pillowy wave of torque, you ought to buy the W12. It’s truly magnificent.

Ask more of the Continental GT in terms of dynamics and the V8 version, with 50kg less heft sitting on its front axle, ought to be the preferable option. 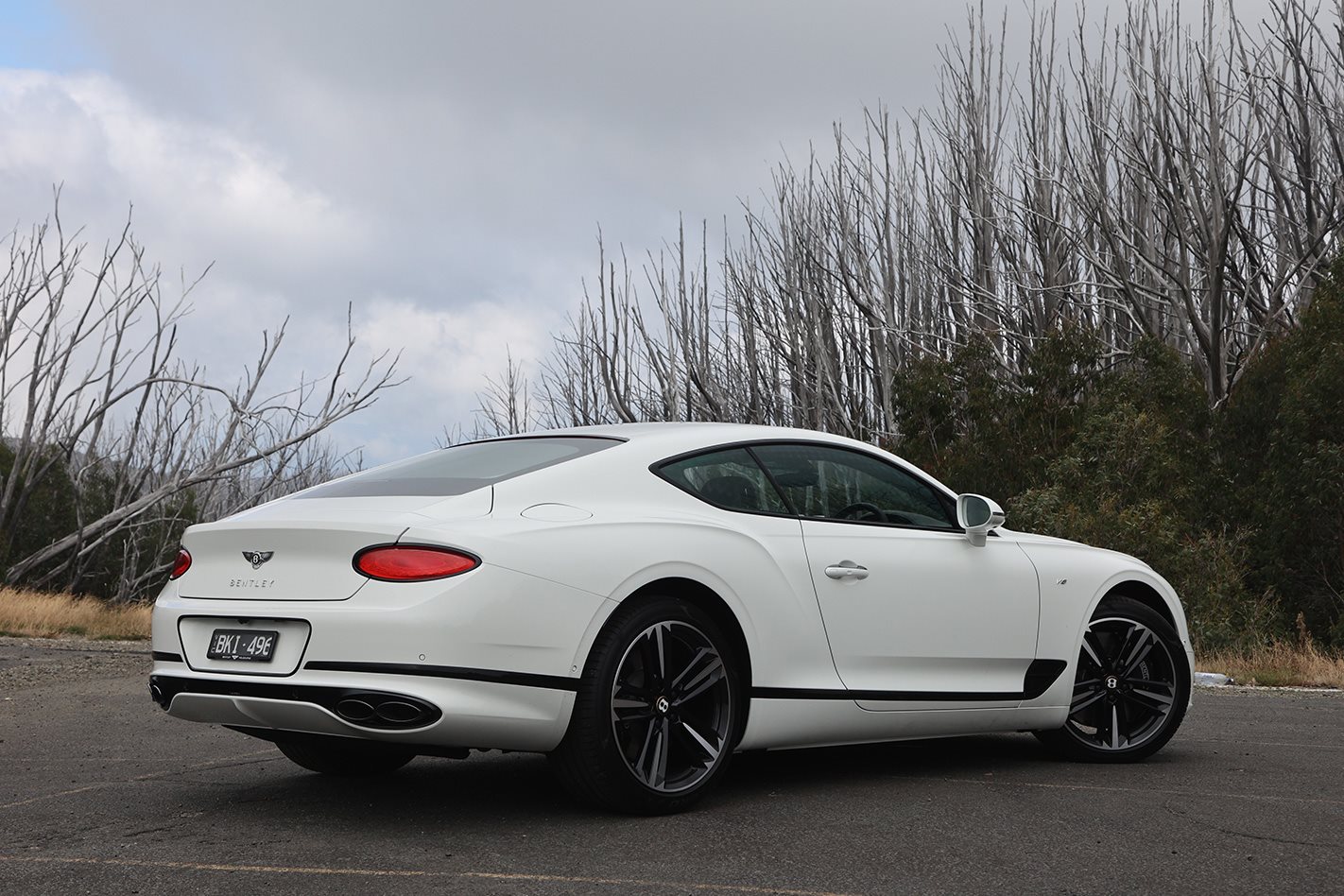 That’s why I’m sitting at the bottom of Reefton Spur, one of Victoria’s fiercest ribbons of tarmac, clicking the Drive Dynamics selector into Sport mode. The spec sheet promises 0-100km/h in 4.0 seconds and ‘unrivalled ride and handling’ which seems quite a lofty aspiration. I’m fairly sure it’ll be rivalled, but I’m just wondering what by.

The Sport mode wicks up the Dynamic Ride system, in effect a 48v active anti-roll bar system that improves body control. It also adds some attitude to the exhaust note, sharpens the steering and throttle maps, tweaks the front/rear torque split of the all-wheel drive system (from 62 per cent rear biased to 83 per cent) and bolsters the three-channel air springs in the Continuous Damping Control for reduced heave and pitch. But there’s still the little matter of 2165kg to consider. Yes, this is a 2+2 coupe that weighs much the same as a vast Audi Q8 SUV.

Drives like one too. There’s that same feeling of masses being controlled by opaque forces that you get when you drive a really good sports SUV. You’re able to barrel into a corner, punish the brakes, and pick up the throttle early, knowing that the car isn’t going to lurch into roll oversteer and that there will be drive going to whichever axle can best deploy it. Yes, it’s pretty good fun, even responding to a throttle lift by tucking in neatly, but you’re always aware of the cost of consumables, the big optional 21-inch P-Zeroes and huge brakes copping a bit of a flogging. On the subject of brakes, the initial servo assistance of the 420mm 10-piston front rotors isn’t the fiercest and there’s no carbon ceramic option offered. 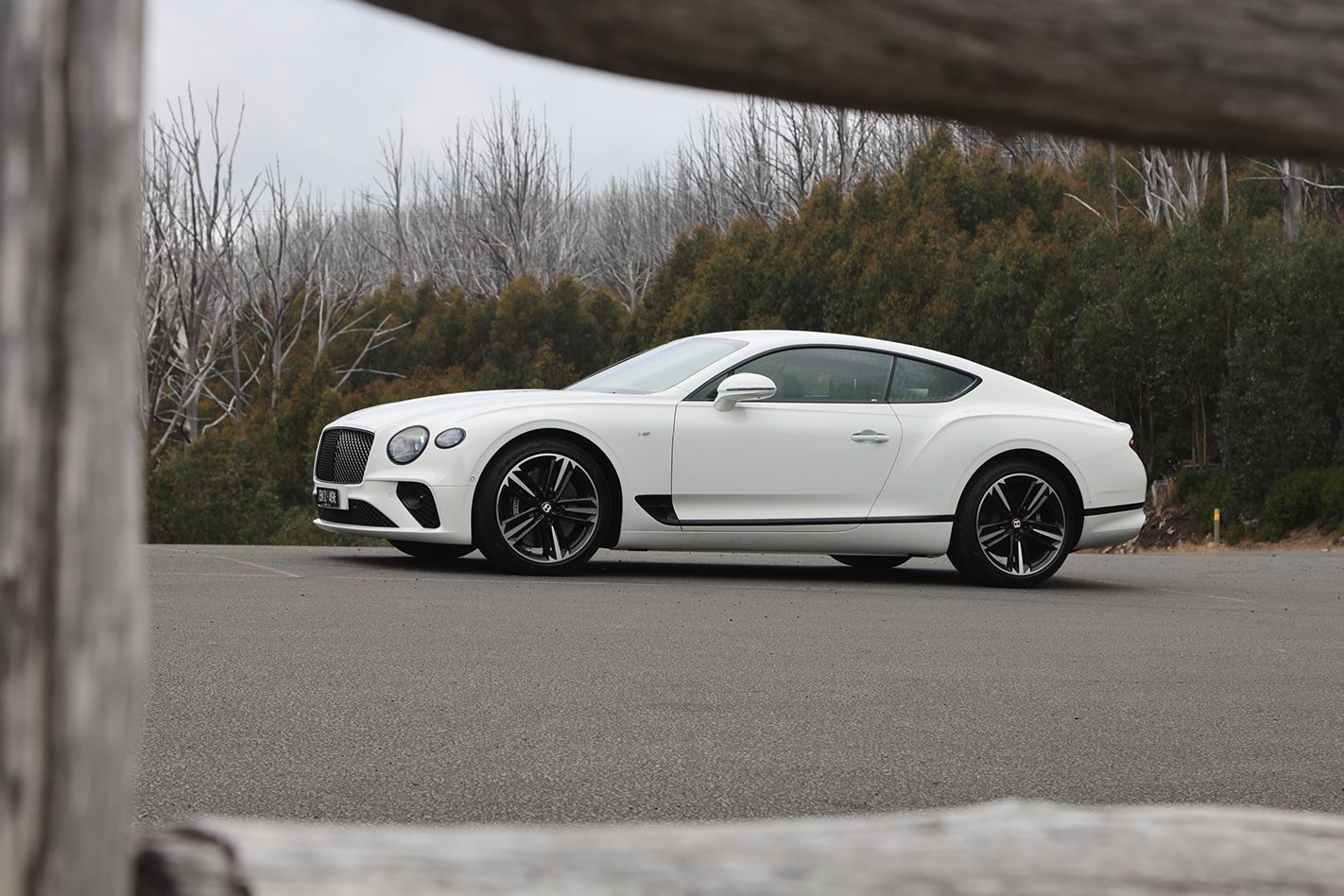 But, let’s face it, this isn’t how a Bentley Continental GT V8 is going to spend its life. The brakes offer a gentle bite for smoothness and that’s probably a smart decision. As a gran turismo coupe, the Conti has always been a class act but if you’re interested in luxuriating in the Bentley’s feel-good factor rather than chasing its 6800rpm redline, it’s tempting to think the V8 delivers a slam dunk against the W12. After all, if you’re not extending the powertrain, what difference does a 63kW power deficit make? In truth, quite a bit, but you need to drive the cars back-to-back to figure out why.

It all comes down to torque. That 12-cylinder engine makes more torque at 1250rpm near-idle than the V8 does at wide open throttle and it changes the way the car pulls away from a standstill, which is key in a luxury car. Accept that you don’t quite get that imperceptibly slurred step-off in the V8 and there’s little to dislike.

Minus points? Despite double-glazed windows and noise-cancelling tech, there’s a little more tyre roar at highway speeds than you’d probably want, but the GT V8 does get an excellent 10-speaker 650w stereo as standard, with the option of a 1500w Bang and Olufsen upgrade or the ultimate 2200w 18-speaker Naim setup. You’ll also search in vain for Android Auto mirroring, the Conti only offering Apple CarPlay. Also missing from the standard specification are some fairly fundamental features like adaptive cruise, a head-up display, lane-keep assist, night vision and AEB. It seems a bit rich to charge extra for features you’d find on a Kia, but you’ll need to spec the Touring pack at $12,936 for this. 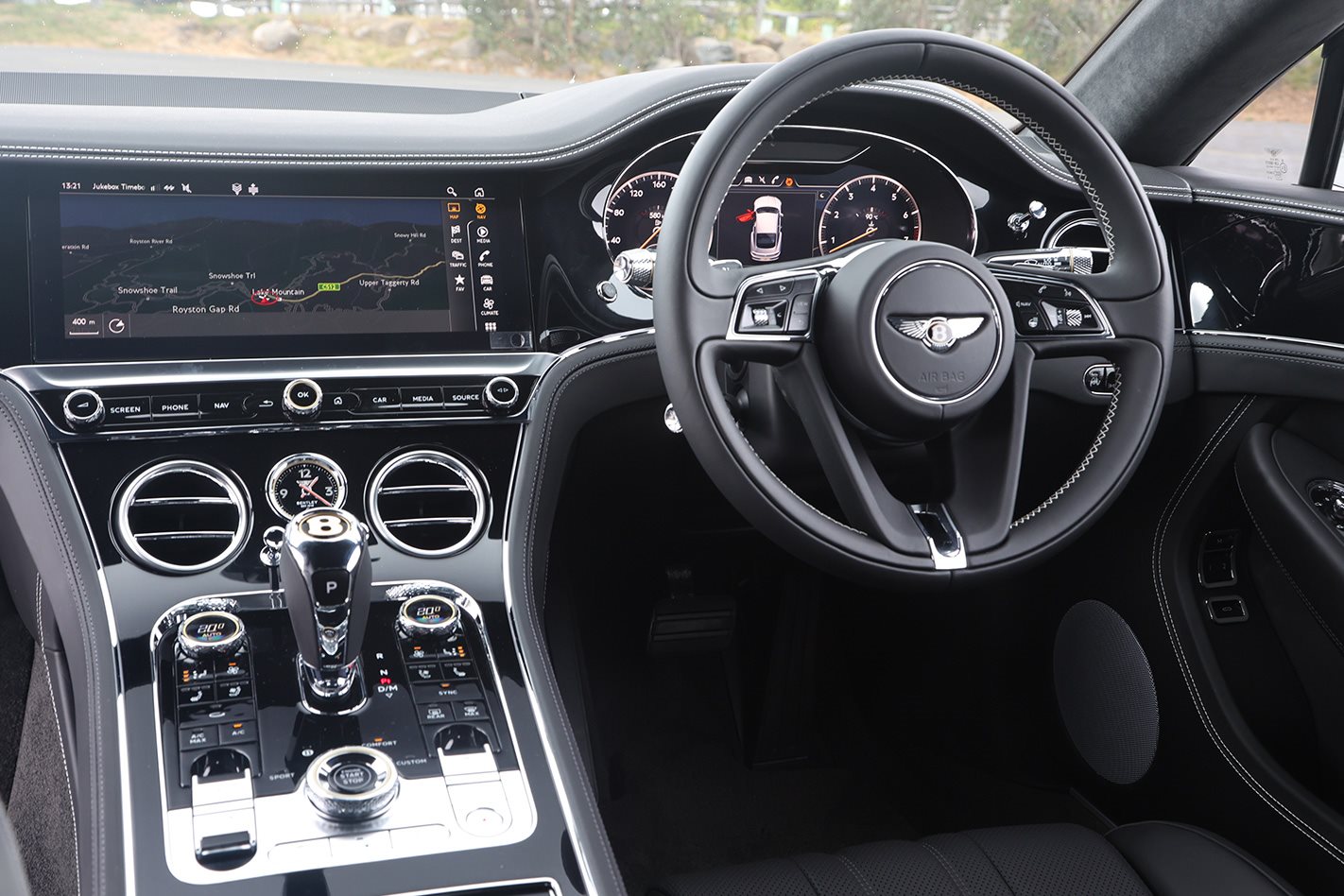 The eight-speed twin-clutch gearbox is an odd inclusion in a high-torque luxury car. A proper torque-converter automatic would probably make more sense, and there are occasions where, at low speeds, the ’box can shunt the drivetrain a little. The adaptive cruise control system is generally good, but even in its gentlest setting it can feel a little snatchy when bringing the car to a halt in traffic. The heated steering wheel is also a little weaksauce, going slowly from zero to tepid, which feels like the ultimate first-world problem, but buyers in this category expect excellence.

For the most part, they get it with the Bentley Continental GT. Whereas the more commoditised Conti originally felt a good way removed from ‘proper’ Bentleys like the Mulsanne, the latest generation bridges that gulf. There are no longer so many obviously shared switches and dials from Audis in the cabin, with the beautiful diamond-knurled dials and switchgear mirroring the jewel-like headlamps. Classic organ-stop vent controls, soft leather hides and perfect contrast stitching reinforce that impression of quality, although I’d counsel against the optional extended piano black interior which picks up fingerprints and creates busy reflections. The optional $3K mood lighting with a colour-configurable LED strip that runs across the dash and around the door trims is also a little chintzy at this price point.

Bentley has nailed ride quality in Comfort mode which is absolutely vital for a gran turismo. A smart ‘Bentley mode’ detects when you’re pushing on a bit and when you’re just noodling along and adjusts the settings accordingly, but I’d rather the car just defaulted to Comfort on start-up for that gloriously molten ride quality. Pair that with a decently sized 90-litre fuel tank, a presentable 358 litres of boot space and the ability to extend range by shutting down one bank of cylinders on a cruise and you have the ingredients for a first-class long distance luxury express. 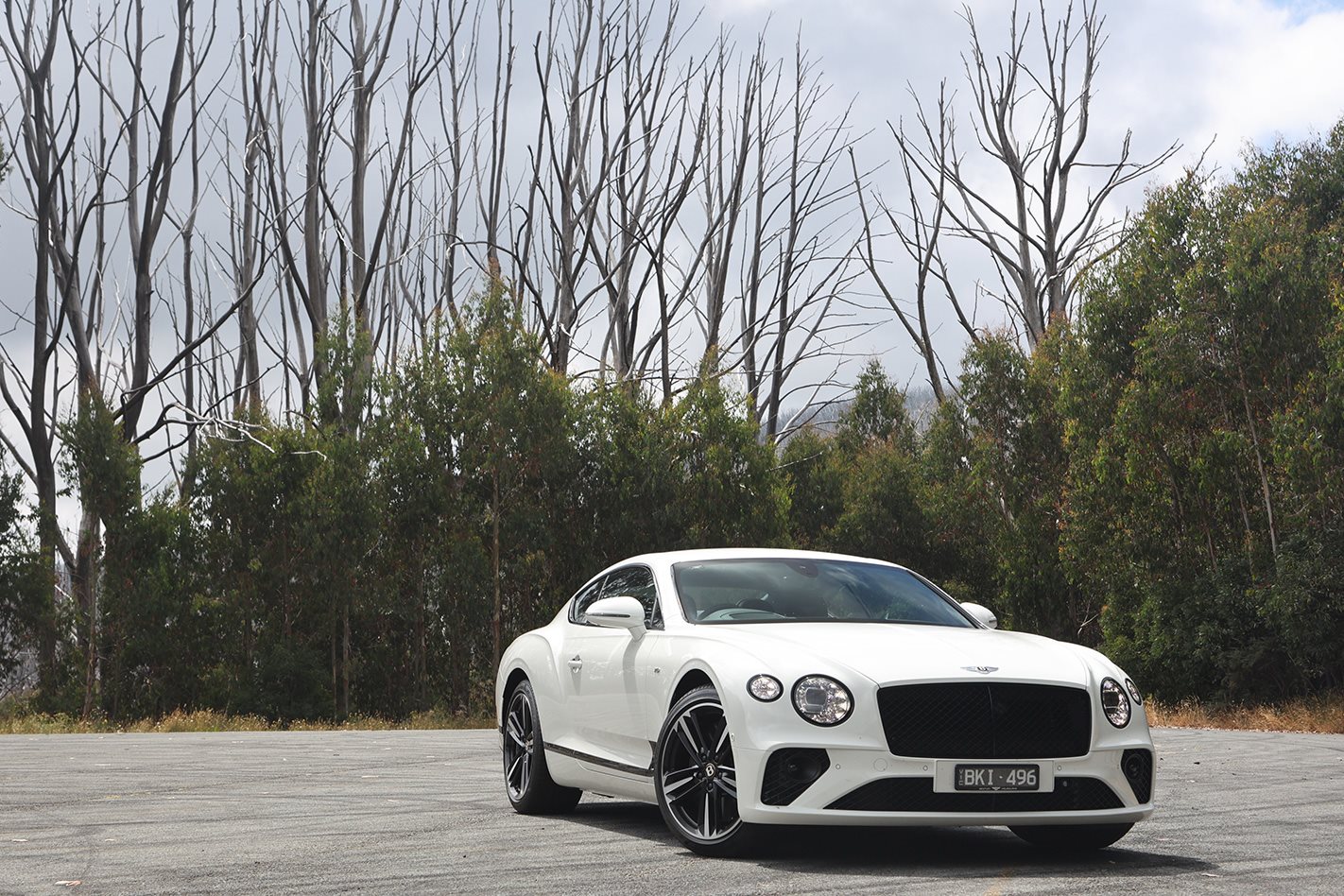 It’s also a car with very few credible rivals, for the time being at least. Nothing at this price point offers the same combination of GT credentials, impression of hand-crafted exclusivity and depth of engineering. There’s a clear development pathway for it to become an even better vehicle too. A plug-in hybrid system along with the fitment of an automatic gearbox would improve the Conti significantly, delivering silent and smooth step-off while retaining range and utility. The incremental weight of a battery pack? Who cares? This thing already weighs as much as a tectonic plate.
That future vision is encouraging. Whereas many manufacturers will turn themselves inside out to accommodate an electrified future, Bentley will only benefit from it, in the medium term at least. The Porsche-developed hardware already exists. For now, the company is squeezing the pips from the final chapter of solus internal combustion.

The Conti GT V8 works as a model that’s 90 per cent wafter and 10 per cent bruiser. A car that always makes you feel a million dollars for $400k? Put like that, you could certainly consider it a bargain.