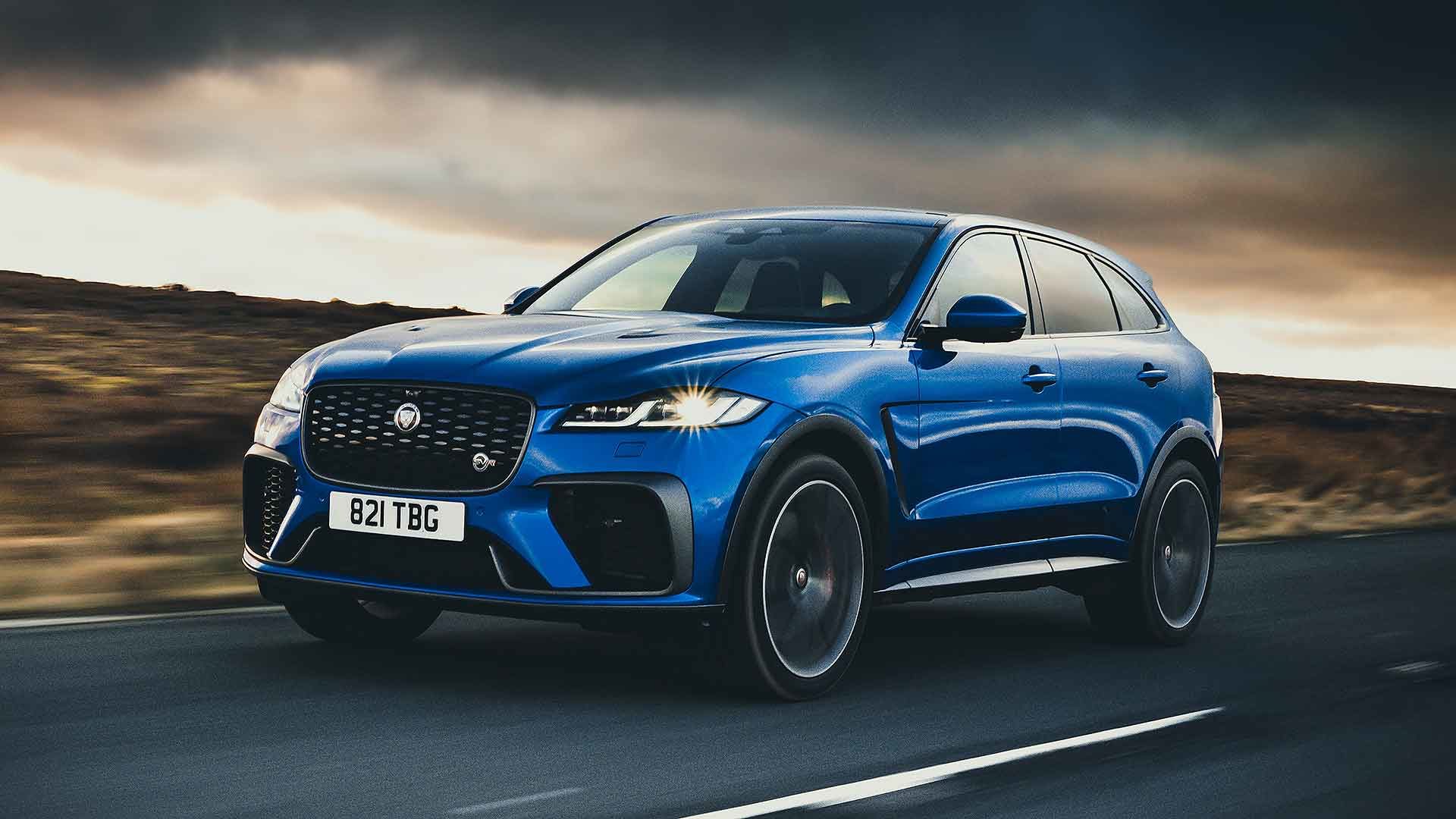 Jaguar is becoming a pure electric brand in 2025 – ahead of the government’s own 2030 target – but it’s not done with V8 engines just yet. Meet the new, improved 2021 Jaguar F-Pace SVR.

It benefits from all the improvements granted to the rest of the F-Pace luxury SUV range, including an all-new interior that transforms it from letdown to class-leader, plus tidied-up styling to make the pretty F-Pace shape even more elegant.

The Power of M exhibit at the Ultimate Driving Museum

The Special Vehicle Operations division has also tirelessly honed the drive, perfecting ride, handling and, yes, that bombastic 5.0-litre V8 engine. Power is the same, but more torque gives a faster 0-62mph time of 4.0 seconds, a higher top speed and an even richer noise.

OK, Jaguar isn’t quite a rival to Aston Martin, nor to Bentley – but it wants to be and, as part of its pure electric switch, aims to push upmarket in the next couple of years. In some ways, the 2021 Jaguar F-Pace SVR proves it’s already almost there.

From the outside, it’s still very much an F-Pace, just a neater one. The bonnet now extends right into the grille, for example, rather than being split by a join line. Headlights and tail lamps are also more modern, and the SVR detailing is well integrated.

I love the XE SV Project 8-inspired mesh in the grille and front bumper, while there are bigger brake cooling vents and, at the rear, a honed aero pack that reduces lift by 35 percent.

Inside is where it switches from below-par premium to knocking on the door of genuine luxury. It’s such a huge step on, owners of the current SVR will be amazed by the lift in appearance, quality and craftsmanship.

The centrepiece is JLR’s Pivi Pro infotainment, a speedy and satisfying system to use. But everything is nicer, from the metal-effect electric window switches, to the knurled climate control dials, to the beautifully leather-trimmed door handles.

Brilliant race bucket-style seats can be had in full leather (with matching bucket-style chairs in the rear), with a grade of softness that wouldn’t feel out of place in a Bentley, but my car had a leather and Alcantara mix.

The centre Alcantara section was incredibly grippy, clamping me into place between the supportive bolsters. And with a unique grade of firm, sporty leather on the wheel, the purpose of this sports SUV is clear.

Stung by some high-performance German SUVs that border on the obnoxious, I admit I was apprehensive when I thumbed the starter button, in anticipation of a thunderous, ugly cacophony.

Thankfully, the F-Pace SVR has more class than that; start-up delivered a discreetly rich V8 rort, then, after a slice of fast idle, just a creamy burble.

This approach continued once underway. Despite restyled forged alloy wheels measuring 22 inches in diameter, low-speed ride is extremely pliant. You don’t need to worry about your torso getting pummelled, or your passengers refusing to travel with you. Active noise cancelling via the speakers means the tyres don’t rumble too much, either.

It’s hard not to fall in love with the old-school V8 engine almost instantly. This 550hp supercharged motor is getting on a bit now – Jaguar’s taken production in-house for its final years after supplier Ford closed its Welsh factory – but, just as the retro Rover V8 was appealing right to the end, so too is this.

The V8 noise is always there, but unobtrusively so in everyday use. It hums and rumbles beautifully (you feel as well as hear this), with the pitch and feedback varying precisely depending on what your foot is doing with the accelerator. It’s all very pure, very alive.

Rev it harder, and the noise increases almost logarithmically. It’s seriously loud when you’re really on it, particularly in Dynamic mode (or when you flick the exhaust button on the centre console into ‘naughty’ mode). It stays on the right side of raucously aggressive, but the cacophony is considerable. Best of both worlds, V8 fans.

Controlled suspension breathes nicely over undulating roads, with none of the clamped-down rigidity of some high-performance rivals. But it’s also wieldy and nimble, with fantastic agility for a 4.7-metre long, 2.1-tonne large SUV. Even the improved brakes are well-matched, with a meaty, reassuring feel to the pedal.

Obviously, it’s colossally fast, particularly when revved right through – it hurtles to peak power at 6,250-6,500rpm with addictive relish. However, the uncommonly cohesive dynamics mean it’s easier to fully use this without feeling intimidated – with the all-wheel-drive running gear well supported by an electronic active rear differential and torque vectoring.

You won’t believe the bite it serves up at speed on twisting roads. For an SUV, it’s wild, even nudging into a touch of oversteer on demand when you really want to have fun. It’s never clumsy, always engaging, and I loved it.

Jaguar wants the V8 engine to go out on a high and the 2021 F-Pace SVR absolutely helps it do just that. While there may be a few more surprises to come in the build-up to 2025, this F-Pace will be the final highish-volume new V8 model, and it does almost 25 years of Jaguar V8 engines proud.

More than 4,000 examples of the original F-Pace SVR were sold in just two years. This one is even nicer to drive, even more characterful, crisper to look at and has an interior that’s night-and-day better than before. Do you need any more excuses to indulge in one last Jaguar V8?

Brawn to be wild: when American V8s ruled Goodwood

The Power of M exhibit at the Ultimate Driving Museum